In what he calls a genius move, local author Cody Wagner has changed his name to J.K. Rowling in a blatant attempt to sell more books. 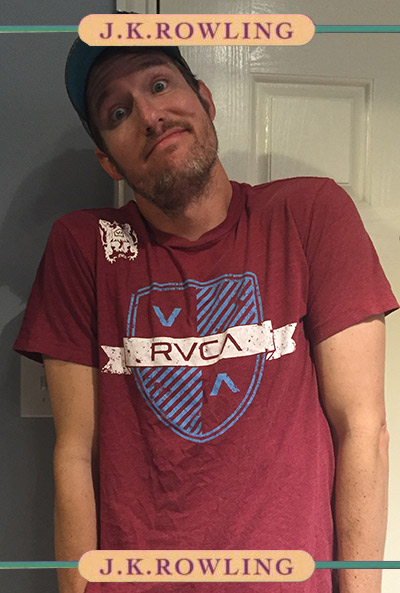 “I can’t believe no one has thought of this before,” Rowling said, holding up a book with his new name taped to the front. “When someone says the name J.K. Rowling, people listen. I’m even listening to myself more lately.”

According to Rowling, the name change should increase his sales by eighteen thousand percent. “Last month, my novel The Gay Teen’s Guide to Defeating a Siren sold two copies. And people searched for me on Amazon six times. Do you know how many searches J.K. Rowling gets on Amazon a month? Seventy-two thousand. And guess who’s book is going to appear in the search results and people are going to buy on accident?” At that, Rowling pointed at himself with both thumbs and said, “Cha-ching!”

Sources close to Rowling said he contemplated various name changes over the course of his research.

Rowling agreed that J.K. was not his first choice. “I changed my mind after realizing Clancy and Shakespeare have written tons and tons of books. I wouldn’t appear until like page four of a search and no one goes that far. Rowling only has like ten books out. That means I should appear on page one.” Pointing at his head, Rowling added, “Work smarter not harder. That’s what Scrooge McDuck always said.”

Despite his confidence in the name, Rowling had some reluctance at first. “I don’t want to sound sexist or anything, but I admit I didn’t want people to start calling me JoAnn.”

Ortiz disagreed with Rowling’s statement, saying, “I caught him looking into the name Judy Blume.” When Rowling accused him of lying, Ortiz pulled out a notebook. “He even practiced autographs.” Opening the notebook, Ortiz showed seventy-two pages full of different variations of Judy Blume, some complete with hearts and smiley faces.

Since the name switch, Rowling has apparently embraced the  moniker and plans to push his marketing efforts farther.

“If I’m going to adopt the name, I should go all the way, right? I mean, smart book sellers give a hundred and ten percent.” When asked if that meant perfecting his craft or forming writing groups, Rowling responded, “No, that’s stupid. What I mean is, I’m growing my hair out. See?”

Rowling then presented a picture of himself that will apparently go on his website, Amazon, and on the front and back covers of his books. He also provided a photo of the real J.K. Rowling for comparison. 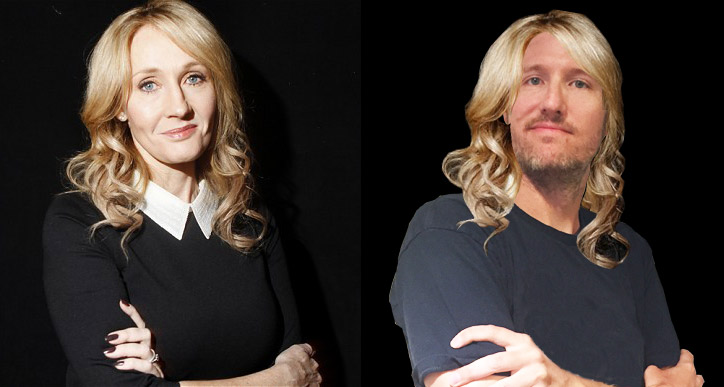 “If you squint really hard, I totally look like her. That’s good for at least a hundred sales. I mean, blind old ladies buy books for their grandkids, right?” After squinting at the picture for a few minutes, Wagner said, “Maybe I should have shaved first.”

As of press time, Rowling is in the process of changing his website to www.rowling-writer.com and has been practicing a British accent.