I had my meeting with the writing mentor today. It went really well! In a nutshell, her main issue was centered on giving the character a primary goal or desire in each chapter. Starting in chapter 3, it’s ALL about the goal. But, in the beginning, I was focused on the introductory stuff. I think there’s some good material, but it needs to be centered around a core desire. Of course my protagonist has desires in the beginning, but he wasn’t working towards a primary goal. That’s what needs to change.

As a result of the meeting, I have to rewrite the first two chapters of my book. It’s like 30 pages so it’s a substantial amount of work. But her points are extremely valid.

Hopefully my rewrites will be much improved!

Well the Easter singing is done. And I must say… I ROCKED IT!!!

I was really nervous before the 6-minute acapella song. Luckily I sang it from behind the podium because my right leg started shaking and I couldn’t get it to stop, LOL! I kept shifting my weight but it didn’t work. I guess all my nerves were concentrated in my leg.

Either way, my pitch was right on the entire time and my voice stayed pure and phlegm free. Overall, I think it sounded really nice. One older woman came up to me afterwards and said it was the best rendition she’d ever heard. And she was like three hundred and fifty! So she’s heard the piece for centuries!

For Easter, we took a hike to the “thousand pockets”. I think they call it that because you start at the base of a really wide plateau that is composed of lots of caves, indentions, and pockets. There really isn’t one set path and you can wander around to whatever area suits your fancy. Then you climb as far up the plateau as you want.

The place really wasn’t too far outside town, but it felt really remote. Chris said that it’s a public area but few people know about it. After getting there, I could see why. The road was really rough and then it turns to deep, cushy sand. There is no way a regular car could make the drive.

Overall, it was a really fun yet tough hike. As I mentioned, you make your way to the top of the plateau however you can. Eventually, it gets pretty steep and you’re walking up through deep red dirt. It’s really good for the joints (playing sand volleyball on it would be awesome), but difficult to climb. It took us about two hours to make our way up and then about 10 minutes to bound down like gazelles.

We didn’t make it all the way to the top but got pretty close. From our vantage point, we could still see the entire valley. Here’s a pic: 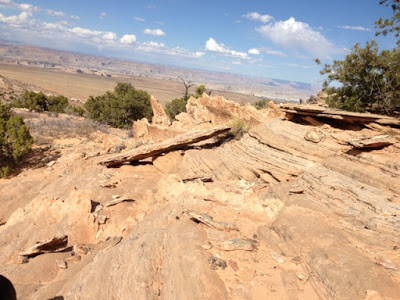 From a different angle, the town of Page was completely visible in the distance. Because of the irrigation, it looked like a perfect oasis in the middle of red dirt. Pretty cool!

With all that said, here were my favorite parts of the hike:

1.    As I mentioned, the area was pretty remote. However, there were groups of free ranging cows all over. And, apparently, they are used to seeing feed trucks driving around. Consequently, tons of cows ran up to us thinking we had food. Other bunches of cows were just lazily standing in the road. It’s like they were forming a food roadblock. The funnest part was the baby calves! There were tons of them running around, and I must say they were really cute. At one point, me and Windy got out of the truck and tried to approach one but it ran away. Probably because of the squealing noises we were making.

2.    About a quarter mile before the hike, the dirt road forked off into an alternate path. We drove down that path first and came across an honest-to-God bunker. It was a full-size concrete bunker just sitting in the middle of nowhere!? It had the rectangular holes in the walls (for guns!) and everything. Chris knew about it, but had no idea why it was built there. I suggested the American Revolution but that’s probably wrong. Anyway, there’s a pic of me sitting in front of it below.

3.    We took their dogs, Molly and Harper, with us. Molly is actually a very smart dog. She’s also a little mountain goat, hopping all around the rocks and shrubs. Harper, on the other hand, is an idiot. Apparently, he’s incapable of learning that cactus equals pain. The entire hike was littered with long-barbed cactus and I swear Harper found every one of them! He was constantly running through patches of needles. Sometimes, he was going so fast, he broke off entire heads of cacti off. We probably stopped at least five times to pull barbs out of his paws, legs, and chest. I would have gotten pictures, but I was too busy helping. 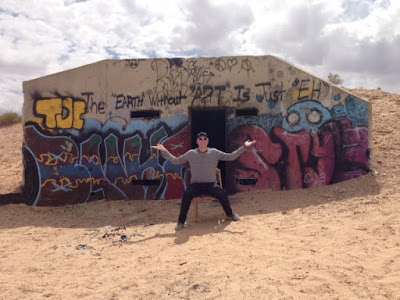 In previous years, we boiled and dyed our eggs. But, this year, because of everything going on, there was no time. Instead, we went out and bought a couple dozen little plastic eggs.

We were just going to use them as-is, but then someone got the idea to “decorate” them. We couldn’t use dye or anything. And markers felt weird. Sooo, Windy and Chris brought out magazines they had, we cut pictures from them, and taped them to the eggs. Now, as children, mom and dad made us draw saints and Jesus on the eggs. It was blasphemy to do anything else.

Well, the magazines we had to choose from were Glamour and Field & Stream…So our eggs turned out a bit different.

I’ve taken pics of some of my favorites: 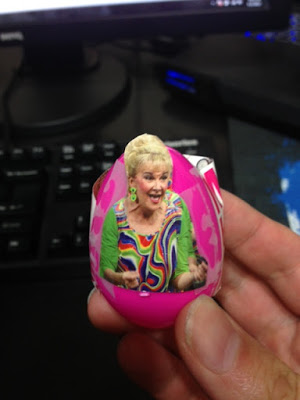 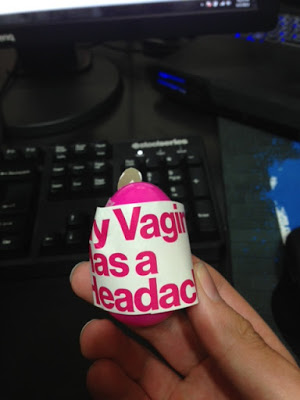 Creepy Woman Egg – Back (from Windy to Cody) 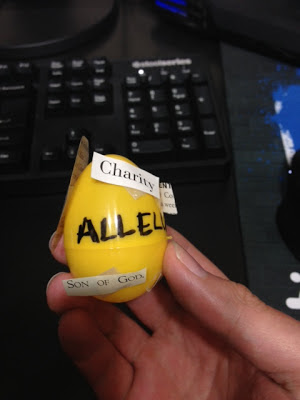 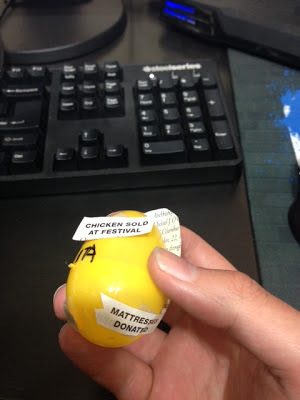 Alleluia Egg – Back (from Cody to Windy) 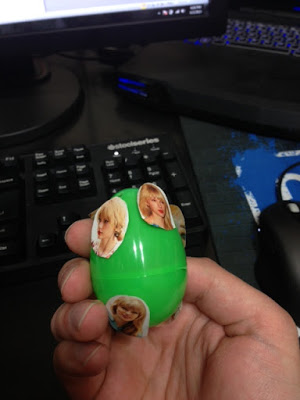 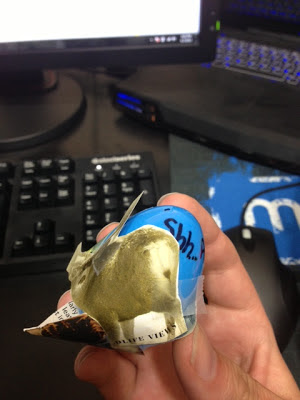 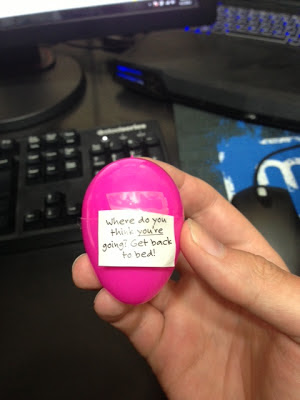 Demanding Egg (from Chris to Windy) 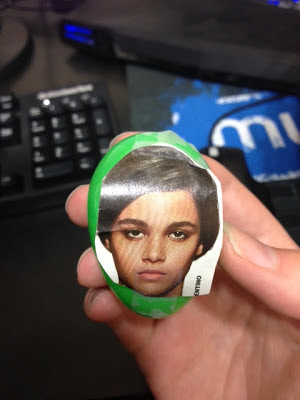 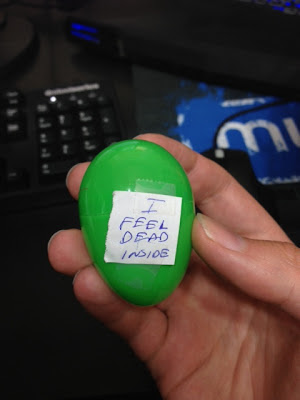 Model Egg – Back (from Chris to Cody)