In forty-five minutes I’m jumping on the phone with my writing mentor. It’s our last session and I’m trying to decide how to feel about it.

On one hand, I will miss the tutelage. I feel she’s helped me sooo much. Admittedly there’s this asinine hope she will say “You’ve got so much potential, I want to work with you for free!” Because, you know, she does this for a living but doesn’t need the money.

On the other hand, I’ve rewritten the first chapter a million and four times. I’m kind of ready to finalize the second draft. However, I’d love to use her again in the future.

The latest round of feedback I received from her made so much sense. And she had a LOT of compliments which was really nice. I think I’ve really progressed a lot in a few short months. At least I feel I have.

However, there are still some issues she repeatedly calls out. For example, she wants me to strive for more precision. For example, don’t use phrases like “halfway there.” It’s imprecise. Exactly how far is that? If two locations are very close, halfway is nothing. However, if they’re far apart, halfway is very different. Instead, say things like “2 blocks away” or “a half mile away.” Precision.

On a different note, I’ve written two scripts for 30-second skits. Each one is setup like a commercial, advertising imaginary products. I don’t want to say anything else for fear of ruining it.

Windy, Chris, and I read through the scripts and we think they’re going to be a lot of fun. If Chris will agree to lend his acting talents, we should start filming any day now.

I saw the rough cut of my video. I must say, I’m so excited!! It turned out far better than I had hoped. I think my voice actually sounds good and the “choreography” turned out OK. There are a few small things I’d like to clean up, like ending each part on the exact same beat. Also, I bump my chair at one part and you can hear it squeak on the floor, LOL! But they’re minor and I can live with them.

The minute I receive the final copy from my editor friend, I’m going to post it here on my blog. It should be any time now.

I’d like to reward my blog readers so I’m not posting it anywhere else for a while. You’ll get to see it before anyone, yeah! Then, after several days, I’ll put it on my Facebook page and stuff.

I hope everyone enjoys it!!

My sister and her fiancé have been gone for over a week (sad face). But I still wanted to talk about the last half of their trip. It was so fun!

(You can check out the first part here.)

Any time new people come to visit, they want to see the Grand Canyon. Oddly enough, it has always happened in the winter.

OK I’m gonna sidetrack here. A lot of people don’t know this, but the Grand Canyon is COLD in the winter. We went just before Christmas and threw snowballs down into it. I think the temperature hovered just below freezing.

Because it’s the part open year-round, I figured The South Rim would be better. However, because we’ve never been to The North Rim, we decided to give it a shot.

We are so glad we did! Holy cow, it’s so much better!! Afterwards, we talked with a bunch of Windy’s friends. Every single one of them was like “Yeah, The North Rim is way better.” I was like “How come no one has told us??”

We liked The North Rim better because: 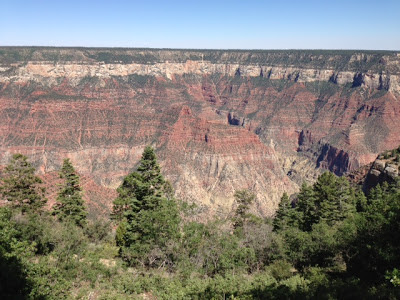 The Grand Canyon, on the other hand, is drier, with more muted red/purple tones:

At The North Rim, you can actually see them come together:

In this pic, the far left is the Grand Rapids Canyon. You can see it merge into the official Grand Canyon.

2. It’s much better for exploration. At The South Rim, you’re very confined. At least in the winter. Everyone is funneled to a few crowded. The whole thing is railed in and centered around a tower. At The North Rim, there are tons of trails and lookouts. And many of them aren’t fenced in. It’s probably more dangerous (and explains why they’re closed in the winter), but feels more open and natural. It’s definitely more peaceful and you can find secluded hideaways.

Here are my favorite moments:

1. Because of the expansiveness, Cory and her fiancé finally figured out the Panoramo mode on the iPhone. Because of it, we spent a ton of time playing rather than actually looking at the canyon. It was fun:

2. While Cory and her fiancé wandered the gift shop, Windy and I found a hike  that wandered off through some trees. It was pretty dense with shrubbery so we wanted to explore. Also, if you could find openings, the canyons were visible and it was so pretty. After about fifteen minutes, we heard rustling in the bushes below us. Both of us freaked out and ran away, sure it was a bear. It was probably a squirrel. Or people having sex.

3. After Windy and I left the scary trail, we came across a bunch of faux log cabins. A lot of tourists were actually sitting out in front or back with their doors wide open. So we took it upon ourselves to spy. We really wanted to see what the insides looked like. Therefore, we struck up pretend conversations about visiting someone (we had to throw eavesdroppers off our trail) and, as we walked by, both discreetly looked in. Then we discussed our findings (“That one had a sofa bed!” or “Ooh the furniture in that one is pretty nice”). We are easily amused.

After leaving the canyon, we stopped at a place called Jacob Lake. It’s really interesting because the lake is about 20 feet across. It’s more a cesspool than a lake. There’s a picture of me standing in front of it somewhere. I’ll have to try to dig it up. The cool think about Jacob Lake is the restaurant close-by. I can’t remember the name of it but they have very ‘outdoorsy’ type food. Like campfire chicken. I think it’s cooked in a dutch oven and served in aluminum foil. Pretty cool! They also sell some of the most amazing cookies ever. I bought a million.

We spent Thursday afternoon visiting the various shops around town. During tourist season, they’re really bustling. Some of them contain really cheesy things like tarantula keychains and signs that say “shopping with my husband is like hunting with the game warden.” There are also hats shaped like clowns, beer mugs, stingrays, and horse heads. It’s really fun looking around and we went into almost every store.

That evening, we decided to play softball. Windy, Chris and I joined a co-ed league sponsored by Windy’s company. We were going to skip out but Cory and her fiancé REALLY wanted to play. In fact, I think they were more excited about it than anything else we did. Including boating, Antelope Canyon, The Grand Canyon, etc… Next time, if we just arrange a week of softball games, it will be their best vacation EVER. No lesbian stereotypes, though. Lol!

1. I am really, really terrible at hitting. On one swing, I almost spun around in a full circle. Chris is AWESOME and keeps telling me to keep my back foot on the ground. It’s easier said than done. I feel I’ll get tons of power if I spin around like a shot put thrower!

2. On the bright side, I’m fast. On one play, I basically hit the ball to the woman on first (it rolled about ten feet from the base). Well I beat her and was safe, lol! I was running my butt off. I think I earned a bit of respect from that play. And saved my wallet: I bet a guy a case of beer I’d get a base hit. Maybe I need that motivation all the time.

3. Cory and her fiancé are amazing. Her fiancé is fast and caught a couple pop flies. Cory had some amazing catches at first base. On one play, the short stop – a guy who’s played for years – hurled the ball at her face. Without flinching she caught it and got the guy out. I would have screamed and ducked, then chased the ball into our dugout. Again, no lesbian stereotypes.

This section is dedicated to my copy editor friend, Jorge. He told me yesterday that the word ‘learnings’ irritates him. In fact, he flat-out said “I hate that word.”

“I would try to use lessons or insights,” he said.

I don’t want to be one of those people who can’t take constructive criticism. Besides, I admit I wasn’t a fan of ‘learnings’ anyway.

Soooooo, if you’ll draw your attention to the title of this section, you’ll noticed it’s changed.

That’s for you, Jorge.