As of 12 PM today, I’m fairly deep into the third draft of the book. Overall it’s going well. I admit there were more self-inflicted comments than I thought there’d be. But I think they’re going to make the story a bit tighter and more polished. I think I’m knocking another 5-10 pages out of the book. But it’s content that isn’t really needed; the story is better without it.

Here’s a fun thing about this round of edits:

A good friend of mine is sending comments as he reads, and his feedback is very similar to my thinking. There have been several instances already where I’ll make a change on my own then receive the exact same feedback from him. And everybody knows that if two people agree on book feedback, then that means everyone will, right? Right? Is this thing on…

When I’m finished with this draft, I’ll be shooting the book to another small group of readers. After those edits are made, the book will be in a fairly good spot. At that point I’ll have to get into the publishing side of things. That’s going to be a bit scary but I think I’ll learn a lot from it. And you will too, because I’m gonna be sharing it. MWAHAHAHAHAHA… cough, cough.

We are trying something new in the writers’ group that I’m excited about. For the last few weeks, I’ve been giving assignments that we work on in class. For example, I’ve had people write a short scene driven by dialogue. Wait, have I done that one yet? LOL I can’t remember. Anyway, a couple people in the class don’t like writing by the seat of their pants. They want time to mull over assignments versus thinking up things on the fly. However, other people in the class LOVE the assignments and their spontaneity.

I’m worried that one group or the other might start feeling ostracized or something and stop coming. So, this past week, we tried something different. Instead of new topics, everyone brought a story they’ve worked on before. We spent a portion of the meeting adding to our stories. Then, the people who like sharing read their work aloud.

We are going to do this for a few weeks then have a mandatory group reading and give feedback. The great thing is, everyone seems excited by the idea.
What does that have to do with my new book? Instead of working on the first book, I brought my new one to class and wrote a decent amount during the “free writing” time. So I’m going to be making progress (albeit slow progress) while editing the first book.

I haven’t done anything with the video this week. I’ve been so busy helping nuns and singing and writing that there wasn’t time. I am going to return the boom mic this week and will look at pushing forward soon. Sorry for the lack of progress in this area.

OK I mentioned a new singing opportunity this past week and it looks like it’s going to happen! YEAH!!!! Here’s why:

The woman in charge of the opportunity heard about my singing which is why she brought the whole thing up. But it was all up in the air because they have a lot of different options and ideas. I mean, she hadn’t even heard me. Who’s to say I’d be the best choice?

Well, she ended up coming to church this past weekend by pure coincidence (her husband was helping with something). She heard me sing and immediately sent me text messages saying how impressed she was. The next day, she said she definitely wants me to perform for the event in question!

I don’t want to give away any details yet in case things fall through but rest assured, if it happens, I’ll be spilling the beans in a future blog post.

I also mentioned last week that I was helping some Nebraska nuns run a kids’ camp. I ended up going almost every day and it was really fun.

I shared some of my favorite moments in the last post but some memorable things happened since then:

1. To draw some attention to the camp, the nuns decided to play music just before sessions started each day. However, they didn’t have a sound system so, on Friday, they asked if we could use my car (which, I admit, has a rocking stereo). We pulled it around to the front, popped the CD in, rolled the windows down, and let the music blare. This doesn’t seem momentous, but when camp was over, at LEAST a dozen flies were buzzing around inside my car! It was awful yet really funny. I kept rolling down my windows and trying to shoo them out. But apparently they liked the air conditioning as much as I did. I went to the store about two hours later and some were still buzzing around the seats. I finally had to open all my doors and fan them away. I think my verbal threats helped.

2. Last week, I mentioned that a bag full of pennies blew my mind. Well this week, water mixed with corn starch exploded my brain. The nuns mixed them together for the kids but, as soon as I saw it, I had to join in. Sure I looked like a weirdo but the mixture makes a paste that’s like solid and liquid. AT THE SAME TIME! MIND BLOWN! If you mush it, it’s solid. But if you scoop some up, it immediately turns liquidy and drips back down. Here’s a pic of me and my new friend, Chandler, playing with the miracle goo: 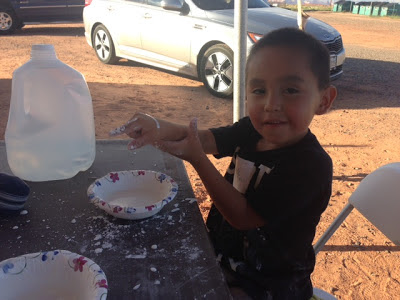 3. Speaking of Chandler, isn’t that such a great name? And that’s not just my love of Friends talking. OK maybe it is. Every time I saw him, I wanted to say “Hello Chenandler Bong” or “Chandler Bing. BING!”

I realized I’ve never shared any of my writing with y’all. Not that it’s anything special, but I suddenly started to feel kind of guilty about it. Well that’s about to change! I wrote a quick story yesterday that I’m gonna share.

It’s just some random weirdness I thought of and put to paper. Enjoy:

When the body splattered on the pavement, organs went every which way. Everything was gross at first.

Then the heart inched itself up and looked around. It didn’t know exactly where to go so it rolled, lopsided, ventricle over ventricle, until it joined a group of people crossing a street. The ones that saw squirmed, but it wasn’t that big so they began to ignore it. Eventually, it followed someone into a food bank. At night when no one was looking, it helped pack boxes of macaroni. It tried its best not to leave smears on the packaging.

The brain took a bit longer but finally bounced away just before the coroner could seize and put it in a jar. Once it got going, it didn’t take the brain long to find The MET. It hid under exhibits and behind the big pyramid and would roam all night. It began messing with the security guards, setting off the alarm then scooting under a shelf.

The lungs worked together to walk away, almost hand in hand. Or bronchial in bronchial. The journey took awhile, but they finally made it out into the country. There, they laid back and took in the warm green fields and cottony clouds.

The testicles went straight to a strip club and peered out from under a chair.

After a few months of roaming to this charity or that museum or that park or that strip club, the organs bumped into each other. It was awkward and they simply stood (or sat or bounced) staring at each other. They didn’t even give a warm greeting. More like “Oh, it’s you.”

After what felt like an eternity, the heart asked if they should get together and give it another go. They looked at each other but couldn’t respond.

Finally, the brain said it didn’t think so. The heart faltered (even though it was secretly happy) so the brain added a curt “At least not yet”, which made them all feel better.

Then they took off running, not walking, in opposite directions.