I’ve been researching the publishing side a lot over the last week. I picked up a million page book that lists virtually every reputable agent in the country, what kinds of books they accept, whether or not they accept new authors, etc…

So now I’m polishing up a slew of different types of queries and synopses. After that, I’ll get feedback on the 3rd draft of the book and proceed with the 4th. After that, it’s likely submission time.

I feel the editing for this book is going to be an absolute beast. I’m cranking this one out FAST (usually getting out 4,000+ words a day when I’m working on it). That means it’s flowing well but the speed pretty much guarantees tons of issues. I already know of several chapters that will need heavy editing. I’m also thinking of things I’d like to add in.

But, overall, I’m really excited about this book and can’t wait to share it!

Still nothing on the video front. I’ve returned the (second) crappy microphone and am awaiting another one. When that comes in, I’ll need to jump on this with a vengeance!

This past Sunday, I was singing at church. Actually it can’t really be called singing. On Sundays, I run the CDs (it’s a tiny church so they play organ music via CD… yeah!!) so I don’t take a super active role in singing. I basically sit in my chair and hum along while watching the timer on the current track.

Well, during one song, the congregation got off tempo. I wasn’t surprised because the volume on the tracks changes erratically. On this particular song, verse 3 was extremely loud, but verse 4 was almost mute. It got so quiet that I cranked the volume all the way and they still couldn’t hear it. So the congregation got behind and weren’t catching up.

I decided to play the hero in that moment. Instead of focusing on the CD, I cleared my throat, turned to the congregation and started BELTING out the song. Only I sang verse 3 instead of verse 4. So now there’s the congregation singing the right verse off-tempo and me singing the wrong verso on-temp.

Naturally, no one knew what to do (and I was completely oblivious, still feeling nice for my good deed) so some people joined me while others kept on with what they were doing.

When the verse finished, I went to sing the fourth verse when the music stopped. That’s when I realized what I’d done. Flushing, I turned back to the music and pretended to be very interested in the CD player.

As mentioned on Facebook, I started volunteering at the local Goodwill last Friday.

The volunteer program wasn’t very structured at all. Basically, I told them I wanted to volunteer, filled out a paper with the shifts I might be interested in, and that was it. There was no background check or training or anything.

On Friday, I showed up at 2:00 (the time we decided) and nobody knew a volunteer was coming. It wouldn’t have mattered – there was no initiation or anything. I didn’t even get a tour of the place. They just looked around and found odd jobs for me to do.

However, in spite of my bellyaching, it went really well. The employees are super nice and really appreciated my help. Because they’re mostly older females, the workers really needed the help of a younger, strapping guy. And since they couldn’t find one of those, they settled for me.

Anyway, here are some interesting tidbits about my afternoon there:

1. Over the course of my three hours, I did three sets of work. First, I moved trash bags filled with clothes under a tarp. There were a whole pile of them (like a slightly smelly haystack) that had to be transplanted for protection from the weather. Second, I tore down cardboard boxes. She gave me a box cutter to use but it kept breaking. That, or I just don’t know how to use box cutters (that very well might be it). Therefore, I pulled out my keys and used them, pretending the box cutters were working great. Third, I had to load their company vehicle with stuff to take to the local dump. That ‘stuff’ included about 10 old TVs, ancient microwaves, couches, and the top half of an air hockey table.

2. Speaking of that ‘stuff’, did you know that old timey microwaves weigh an average of six million pounds? I was able to load most of the TVs by myself but couldn’t lift one of the microwaves. It was gargantuan! One of the female employees (the one with the bad back) had to come help me with it. When we squatted to pick it up, she said, “I moved this by myself last week.” Needless to say, I punched her in the face. Except my arms are so weak, it tickled her more than anything else.

3. I wanted to talk a bit about their company vehicle: 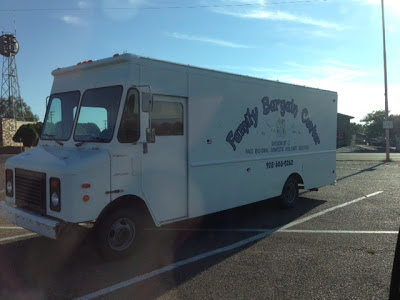 As you can see, it’s like a gigantic version of those old milk trucks. The key broke in the ignition and they can’t get it out. So, when you get into the truck, you just turn what looks like an empty ignition switch and the thing starts. Also, it didn’t come with a passenger seat, so they plopped in an old lady’s chair: 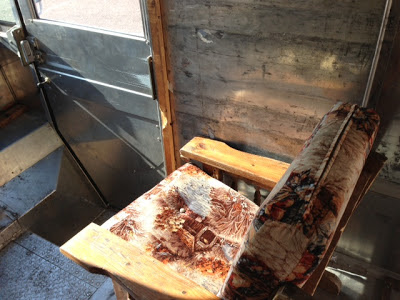 Interestingly, I got to drive it. No, it wasn’t interesting. It was horrifying. The thing needs at least 80 miles to make a turn. I was so worried about turning it that I ran two stop signs in a row.

Yesterday, when I came home from lunch, there were about a zillion little ants running around the walkway just outside our house. It’s been raining for days so we wondered if they were driven out by the storms.

Either way, we could see that they were making a bee line into the foundation. So Chris went and grabbed one of those pumps the pest control guy uses and began to spray around the house.

As I watched the bug napalm fall, I found myself saying “sorry” to the little ants. I actually felt bad!

Then, some friends here invited me fishing, but I keep putting it off. I’m fascinated by the idea and it seems fun. But I honestly don’t know what I’ll do when they kill the fish. They eat them, of course, so it’s not just for sport. But I’m afraid I’ll tear up or something.

It’s weird. People say that, as you get older, you become less and less afraid of death. But I find the exact opposite to be true. I used to not worry about it that much, but now dying is my number one greatest fear. It’s embarrassing but if I so much as see the word ‘dead’ or ‘death’ in a book, I flinch.

I think I’m so terrified of it because I feel I have so much unfinished business. When I was younger, I was just flying by the seat of my pants. But now that I have these goals, I can’t imagine dying without fulfilling some of them.

So if someone could direct me to the nearest Sorcerer’s Stone, that would be great. Or if you’re in Britain, a Philosopher’s Stone will do. Thanks!

I don’t have a short story to post this week. But I wanted to link to the beginning of a story from an old coworker of mine. His name is Ben Wallace and he writes comedy stories that are really entertaining. Here’s the sample: