Wouldn’t you know it, as soon as I wrote the last post condemning my copy editor, she replied back (she doesn’t read my blog… it was just coincidence).

I’m still irked by her delays and lack of communication, but her feedback was actually really nice. She seems very practical and called out the feasibility of different parts of the first chapter. They were things I hadn’t even thought of, but her notes made sense.

Based on her feedback, I’m making more edits then will submit to more agents. The big cloud looming over my head, though, is whether or not to use her again. Her work seemed really top notch, but I’m not sure I could stand weeks of delays every step of the way.

Speaking of agents, I received my first couple of rejections last week 🙁 I wasn’t going to mention it here, but I figured I should. I admit I was kind of embarrassed, but I guess I have nothing to be ashamed of. First off, I’m putting myself out there. Second, this is my first book, ever (and I’d be foolish to think it was going to get snatched up right off the bat). Third, I didn’t even submit it to the “good” agents (not that that matters).

Still, the feeling that washed over me when first seeing those e-mails was unexpected. I was fully, completely, 100% expecting the rejections. And I thought I would smile or laugh when opening the e-mails. That’s not what happened at all. As I read the rejections, I ended up feeling a gnawing pit in my stomach that screamed, “It’s never going to happen.”

Well you know what? Screw that voice! It’s not supposed to be in my stomach, anyway!

The edits to the second book are done! That means the second draft is official here.

Over the next couple days, I’ll be reaching out to the chosen ones (i.e. the readers) and sending out manuscripts. I had a lot more interest this go around, and have 6 readers all lined up and ready to go.

This book is aimed at a younger audience so I think it’s going to be a quicker read. However the book is close to 500 pages (wow!!!) so I think quite a bit of cutting will occur in the next draft.

Well everyone has committed to coming together and recording the video this Saturday.

At this point, I bet no one even remembers what this video is. To refresh your memory, I’ve written some fun comedy skits. They’re just like 30 seconds each, but are good experience with a different type of writing. It’s also fun to perform and I was excited to share them with you. Unfortunately you’ll all be dead by the time they’re ready. Maybe your great-great-great grand kids can enjoy them.

It looks like the Christmas Eve Mass is going to be a sing-a-thon. We’ve had a couple meetings and it looks like I’m going to be singing all throughout the service. The priest even paid me a nice compliment:

I mentioned to him that I’d like to sing O Holy Night. I love that song and it’s something I’ve wanted to do for a long time, so I figured I’d at least bring it up.

Fortunately, Father agreed and I suggested singing it during a time when no one’s really paying attention. It seemed like a good compromise (he lets me sing the song I want and I do it during a time that doesn’t really matter).

Father however changed it up. He said he wants me to sing when everyone is quiet and focused. That way they can watch as I perform. I admit I may have squealed when he said that. In my head, of course. Or maybe out loud.

This past weekend, Windy, Chris, and I went out to the forest to cut down our Christmas tree.

How cool is that?

The traipsing out to the middle of nowhere and finding our tree is (sort of) a tradition we started two years ago. It all began when we set up the fake tree and realized, “This plastic thing is really sh***y!” It’s only like 6 feet tall and you can see all the way to the middle plastic rod, even when you spread out the branches.

Instead of springing 200 bucks for a good tree, Chris suggested we buy a $15 permit and get a real one.

OK I have to stop here for a second and tell y’all I had no idea you had to get a permit to chop your own Christmas tree. Did everyone know this? Seriously, I thought you could just wander wherever you wanted and, if you found an awesome tree, you just chopped it and brought it home. Found a great tree in the woods? Great! Chop it down. Found the perfect tree in your neighbor’s lawn? Nice! Chop it down. Found a flawless tree in the parking lot of your church? Yay! Chop it down.

Apparently it doesn’t work like that. You have to get a permit first, and that permit only works for a certain area.

So, two years ago, we got our permit and then went out tree huntin’ (said with a Texan drawl). We ended up having so much fun that we decided to do it again this year.

Therefore, on Sunday, we left for the Kaibab National Forest. It’s about an hour and a half drive from the house and we arrived in the afternoon. The sun was really bright but it was still bitter cold and everything was covered in snow: 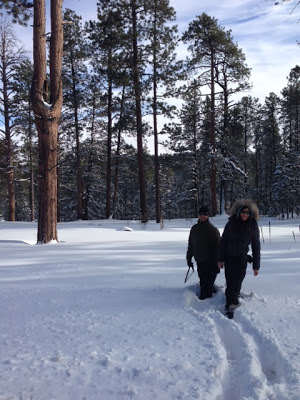 As you can see, it was incredibly beautiful despite the testicle shrinking temperatures.

Once we arrived, the Christmas tree selection began. For those of you who don’t know, here’s how it works:

You park somewhere (at random) out in the middle of nowhere. Then you wander around until you find a tree. Sounds straight-forward enough. But here’s the thing people don’t realize – finding a tree is really tough! I admit, the first time we went, I assumed we’d find perfect trees everywhere. I figured it would be like our own personal Christmas tree lot.

Out in the wild, most trees suck. Because of sunlight and other trees and all kinds of other factors, 99% of trees have bare spots and uneven branches and human eyeballs. OK maybe not the last one. But the pickings are slim out there folks.

That actually makes it more fun, though, because we got to wander out in the forest for a long time, and view scenery like this:

Also, the snow got really deep. Here’s a pic with it up to my knees: 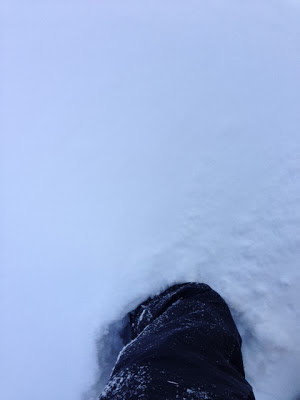 (Chris said that, by the time winter ends, there’s five feet of snow out there.)

After a couple hours of searching, and narrowing down the least of the worst trees, we finally found THE tree: 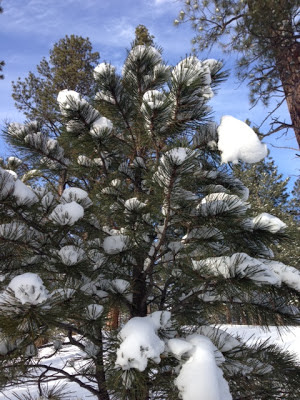 But I will warn you about one thing – trees in the wild seem much smaller than they are in real life. This is how it looked in our living room: 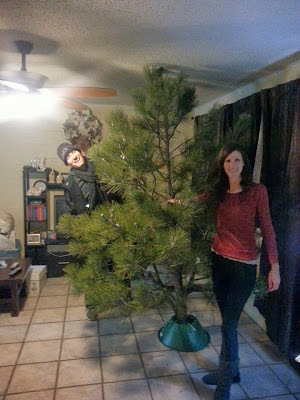 We’ve had to rearrange the furniture because it takes up half the room, LOL!

I mentioned last week that I’d be using this spot for Christmas-related stories. So, for this entry, I wanted to talk about something fun (that also calls out how weird a kid I was).

I call it, I believed in Santa until sixth grade.

Seriously. I was in middle school before I stopped believing in Santa Claus. I think that’s the oldest anyone in the history of the world has ever been.

Why, you ask, did I believe so long?

The answer is simple. I had a really convincing family. And a mean family that took great delights in messing with me! Also, I was really trusting. I thought every word out of my parent’s and sibling’s mouths was fact until I was in high school.

I still remember, in fifth grade, sitting there saying, “OK You can tell me the truth now. I know there’s no such thing as Santa.”

My mom, sitting on her personal couch that we weren’t allowed to touch, would smile and say, “Well, if you really think that’s true, maybe it is. Wait! What’s that?” Suddenly, her head would fly to the corner.

“What?” I’d say, leaping up and running away, thinking it was a bug.

“It was an elf! I can’t believe you missed it!”

She’d look at me, completely innocent, and reply, “Yes. I promise. It was right there.”

And they did it a lot! Like ten or fifteen times a day. I think it gave me a psychological complex. After awhile, I began to think I just wasn’t fast enough to see an elf.

This blog is really long so I’m going to hold off on a short story this week.