We are back in Page after what turned into a month long trip to Omaha. It was exhausting! But, fortunately, Windy seems to be doing OK. So thanks everyone for your thoughts and mojo and everything.

I don’t really have any updates on the first book. I’m still submitting to agencts and looking into self-publishing. WHEEEEEE! But nothing new on this front.

I finished the third draft of the second book yesterday, whoohoo! As mentioned before, I went through and planted seeds that should (hopefully) cast the right amount of suspicion in the proper direction, meaning the ending won’t throw readers a complete curve ball.

My worry now is that I’m doing too much. While I wanted readers to suspect what’s going on, I don’t want to spell it out in black-and-white. It’s a delicate balance, I’m realizing.

Because the third draft is done, I’m going to need a few more readers. I have a few in mind and will reach out to them shortly. But, if anyone is interested, please let me know.

I got back to singing at church this past weekend, and I must say, I really missed it!

I thought I might be really nervous when the time came to sing again. And I worried I’d be like, “I don’t miss this. It’s nerve-wracking!” But that isn’t what happened at all. Instead, during the second song, I settled into a really nice place, and was able to get into the singing. It was just cool to be back where I can contribute, and I look forward to more opportunities.

Although I’m back from Omaha, I wanted to talk a bit about the last leg of the journey (after the whole hospital ordeal).

I’m talking, of course, about the nuns!

This past summer, Chris and I helped some visiting sisters run a camp for Navajo kids out on the reservation. It was fun and, coincidentally, the nuns were from a mother house in Lincoln (which is a half hour from Omaha).

When they heard that we were going to be in the area for Windy’s surgeries, they graciously invited us to stay with them for a few days.

OK I admit, that I was really nervous at the thought of living with nuns. Sure, I sing at church and everything. But, as people who know me will attest, I’m really not the most religious person in the world. And the thought of staying on a small campus with 30 sisters was pretty intimidating. I mean, I’ve been known to let slip the occasional (translation: frequent) cuss word without realizing.

However, in order to be appreciative and save money, we agreed to stay with the nuns.

I must say, I’m sooooooo glad I did!

First off, when we got there, I realized that guests don’t stay with the sisters. No, we got to board at the guest house, a completely separate building that was absolutely huge: 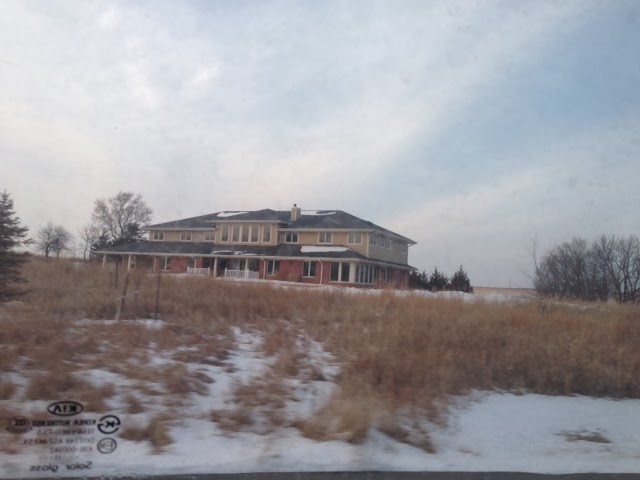 Furthermore, the guest house was amazingly nice! I think I expected something very plain and drab. But a lot of people were generous enough to donate tile and granite and wood, so the place was equipped with hardwood floors, granite countertops, intricately tiled bathrooms, etc… It was awesome!

The icing on the cake was that there were no other guests, so Windy, Chris, and I got the ENTIRE place to ourselves. Typically, when we go on trips, I (being the third wheel) get stuck sleeping on the couch or on the floor. Not with the nuns! No siree, Bob!

I got an entire wing.

After getting Chris and Windy settled, the nuns took me to my quarters, which consisted of a library, study, bathroom, and bedroom. All for me!

All right, I’ll stop going on and on about the guest house and share some of my other favorite moments:

1. First off, this isn’t really a moment, but I wanted to point out how incredibly nice the nuns were. If you want a lesson on how people should behave toward each other, pay a visit to this mother house. They never said anything bad about each other, and were the epitomes of positivity. It was really refreshing spending time with such uplifting people. And they weren’t super preachy either; they were about being simple and decent.

2. With that out of the way, let’s get onto the competitions, yeah! The first evening, we played a card game called “George” with a group of the sisters. I’d never played it before, but found it’s a great way to make something out of all those half-full decks of cards most people have stashed at the bottom of their game closets (you know the ones I’m talking about). See, you gather up all those cards (matching or not) and use them to play a game similar to rummy. Such a cool idea.

The rules are kind of weird so I can’t really explain here. But we really got into it. And, although the nuns told us not to be mean to each other (at one point, they made me and Chris congratulate each other because we got really competitive), I could tell they really wanted to win, too. And win, they did. One of the sisters practically doubled my score when it was all over. Ack!

3. The second night of our stay, a few of the sisters heard Chris and I played basketball. I wasn’t aware of this, but they have a court attached to their house, and they play regularly for exercise. Therefore, they challenged us to a little friendly competition. And so, after dinner that night, we wandered over to the courts, found a couple of balls, and began shooting around.

When it was all said and done, I must say, nuns can play some basketball! And that really means something considering they had to play in their full nun outfits! (NOTE: I’m not really sure what the entire outfit is called, LOL): 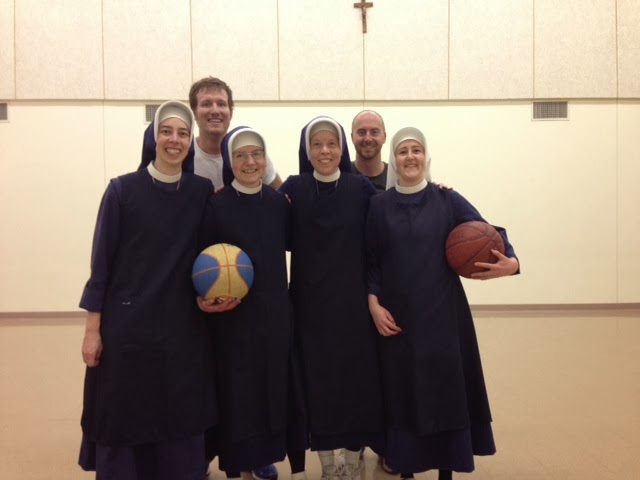 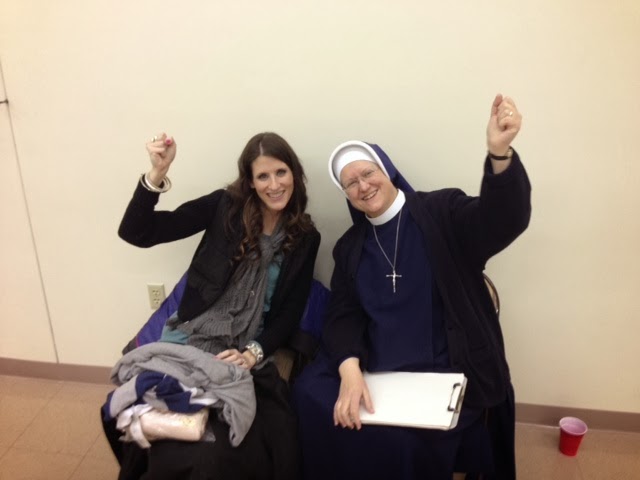 To make it a bit more even, Chris and I played in our street clothes (I even wore my beanie), and it was really sweaty and awkward, so I have to give the sisters credit.

We started off with a few games of knockout:

(NOTE: Fortunately, the video they took was of the game I won.)

Then we moved on to 3v3 full court (ugh!!). I had a huge height advantage, so I was able to use that to my advantage. But one of the nuns was lights-out with her shooting. She never missed. So I tried to spend my time guarding her and Chris (although he missed all his shots and they stopped passing to him 🙂 ). Still, the exhaustion of full-court soon hit, and I found myself just standing under my goal waiting for fast break points, LOL)

OH, I have to mention that, on one play, a nun took a shot, and Chris blocked it. Only he didn’t just swat it away. No, he was like Godzilla, and crushed it down right back into her head. We know where he’s going when he dies, don’t we? Unless you believe in something else. They you know where he’s not going or where he’s reincarnating or whatever. We respect all beliefs on this blog 🙂

Well, I have some pretty large news (unrelated to writing) that I wanted to share with everyone. However, it’s still relatively new so I’m going to hold off until next week.

If you have trouble waiting, I can reach out to the sisters for some lessons on patience 🙂

At this point, I think I’m going to have a few people read it and see what they think. If it’s appropriate, I’ll share it here afterwards.