Here’s my latest 4-pronged update:
Writing
I’m actually in the 300 page vicinity in my book! Holy cow it seems like a lot! Yet I feel I have so much work left to do.
Speaking of quantity, I read Stephen King’s book ‘On Writing’ and he writes 2,000 words a day, no matter what. He said sometimes the words come to him and he’s done by 11:00AM. Other times, it’s more difficult and he will be at his computer all day.
When I first read that, I was like “2,000 words! Holy cow, that’s impossible!” When I wrote other stuff, I was usually lucky to get out a few pages a day. Essentially, I’d write a paragraph then edit it for a while before moving on. So, really, I’d spend just an hour or two writing then another couple hours editing.
The reason some writers, like Stephen King, are so prolific is they write “shitty first drafts”, meaning they just get the story down on paper then edit the entire thing later. That sounds REALLY daunting, editing a behemoth only when it’s complete! In my computer science days, that would be like writing a huge program without debugging and testing a single component on the way. It seems weird!
Well, I heard it’s good for insecure writers because they’re not constantly judging their work every day. I like that! So I’ve decided to give it a try. I’m not sure of the quality, but I found if I don’t re-read or edit *a single thing*, I can get out about 3,000 words a day. And that’s in a very short time. For the last two weeks, I’ve been at my computer writing about 9:30 and finished up about 12:30 or 1:00. Again, I’m sure HEAVY edits are needed but generating that much content (and not scrutinizing the crap out of it) feels good!
Of course, I’m sure I’ll throw up when it’s done :p
Singing
OK so I have an idea for a musical number I want to perform for you. Originally, I was going to upload a tiny sample of my singing, but then thought “Go Big or Go Home!” Long story short, I’ve had an idea for a while and it hit me last week exactly how to pull it off. So I’m gonna give it a shot!
I can’t give anything away, but just know it should be really fun! And it will pretty much be me singing. Windy is going to help and I’m already starting to rehearse the song. It’s pretty difficult but one I really like.
Because of the effort, it will be a few weeks before I’m done. But, if things turn out OK, it will totally be worth it! And, if not, I will post myself singing parts of 2 songs as a form of payback. Deal? Deal!
Enjoying the Area
We went to Phoenix again this past weekend and had a really great trip. We found a Ramada Inn that was cheap and really nice! They had just remodeled our room and it had new granite countertops and some nice little touches. As soon as we pulled into the place, we realized why it was so cheap: someone had built a strip club called “Christie’s Cabaret” right in front! You literally have to drive past the strip club to get to the hotel. It was pretty awesome, not only for the fact of its interesting location, but for the resulting discount. I also noticed that most of the people at the hotel were “country boys”. Coincidence?
On Saturday we went to the St. Patrick’s Day parade in Phoenix. I was expecting it to be like Greenville in Dallas: non-stop debauchery!! But it was the opposite. Most attendees were families and the whole thing was pretty tame, but fun. I’m glad we didn’t bring the vodka and Gatorade.
Here were some of my favorite parade moments:
1.    Somewhere in the middle of the parade, the DeLorean’s Club drove by! It consisted of a bunch of mint condition Back to the Future cars. So cool! And one person spent a TON of money making his look like the one from Back to the Future part 2. He had that reactor thing on the back and everything. I’ve posted a pic below.
2.    OK, does anyone remember the Carol Burnett Show? I’m not sure if you’ve seen it but, during the credits, they played a cartoon of Carol dressed as a janitor with a mop. She’d mop the floor and scratch her butt then start looking at the credits as they rolled by. Welllll, a group of women formed a club called Marcia’s Mop Brigade. The woman in the group all dress as that mop lady and they carry mops around. In the parade, they actually did a little dance with their mops. Greatness! 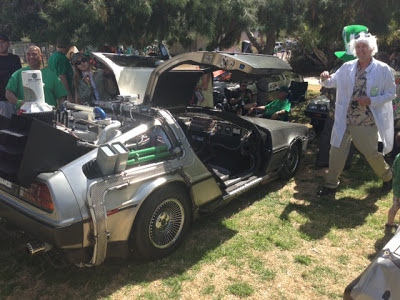 The next day we went to the Phoenix Zoo. Chris was really sick so Windy and I ended up going without him. As an unspoken compromise (he really wanted to go), we spent almost all of our time in the kid’s section. After exploring it fully, I think the kids’ section is the best section! We took a pedal boat ride, looked at a 10-inch bird-eating spider (eeek!), and saw an emo warty hog with long bangs. Here’s a pic: 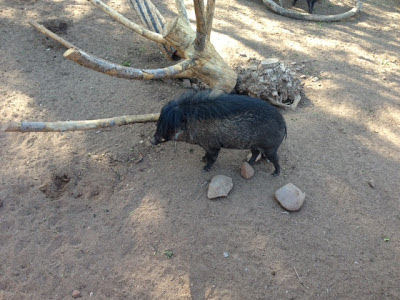 Oh! About the pedal boat: first off, I always thought it was a “paddle boat” but the sign clearly said “pedal boat”. That blew my mind. Secondly, I don’t want to give into stereotypes, but Windy was AWFUL at driving the boat 🙂 She almost steered us into spider trees!
Random Learnings or Stories
So one of the reasons I came here is to keep myself focused. As I mentioned before, I’m fairly driven but have a tendency to be all over the place with different projects. On my weekly walks, I’ve been thinking a lot about it.
I firmly, 100% whole-heartedly believe that anyone with a modicum of talent can be successful and *fulfilled*. It’s all about drive and persistence. Be honest, of all the people you know, how many are truly TRULY driven? I’m talking about the people who constantly stay at home to work on career fulfillment instead of going out. I’m talking about the people who will put themselves out there and, if they’re rejected, they continue plodding away. Those people who know no fear and never give up.
I’m not on that list.
Honestly, of the hundreds of people I know, I think at most two fall into that category. One of them is a good friend and software developer who would stay at home to program on Friday nights instead of going out with us. Well, let’s just say he’s happy and doing VERY well right now.
And I HONESTLY think that’s true of anyone. A lack of talent isn’t the downfall of people, it’s drive and dedication. That may sound like a no-brainer or common sense but, if it is, why are there so many professionally unfulfilled people out there?
I know a guy who has written books and submitted them for publication. The books were rejected and he now works on small things in his spare time… Maybe once a year. If he wrote every day and persistently reached out to writers and publishers, he would eventually get published. Most people just aren’t willing to invest that kind of time or flee at the first real rejection. And then they start saying things like “Only certain people can be successful” or “Only people with connections make it.”
I believe this kind of thing is true of anyone in any profession. And, after thinking about it, I’ve labeled 3 groups of people:
1.    The do nots. These are the people who sort of drift through life without taking any risks. This group talks and talks about trying this and that. They may even enroll in a course here or there. But there’s always a reason things fall through. They never actually finish a class or book or school or whatever. And there’s always an excuse.
2.    The “ones”. These are essentially the people who will try something. Once. They are the people who will actually get into something and give it their all… for a while. They may actually complete stories, or get into some plays, or write an iPhone app. But, they typically give something one shot and expect miracles to happen. Or they are the people who are afraid to “let themselves suck” so they quit when perfection isn’t instant. Some are even afraid of success. That sounds so weird: who in their right mind is afraid of success? But how many people have been on the verge of something, only to let it slip by?
3.    The driven. They are the minority and the ones who get into something then do what it takes to succeed. Again, I only know one or two people in this group.

Now, I do think there are those people in each group who are actually content. If so, I don’t fault them one bit. People used to make fun of guys who moved back to my home town, saying “only losers end up back in Pampa.” If the people find fulfillment in a place or thing, I couldn’t disagree more. If you’re content somewhere, who cares where or what it is? There are PLENTY of unhappy people in New York City or Los Angeles.

Also, I’m not insinuating people in the first two groups won’t find any form of success. I would say that, at my job in Dallas, I was very successful. I worked extremely hard and was promoted for my efforts. BUT, I wasn’t relentlessly chasing my passions and doing whatever it took to achieve them. I was basically caught in a wave of success, but it wasn’t necessarily the wave I wanted. I think lots of people are caught in similar waves.