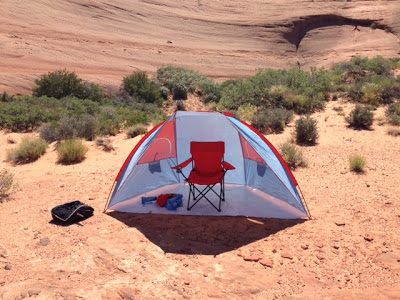 (NOTE 1: This pic was taken before I added the rocks.)
(NOTE 2: I just realized how ghetto all this was: wrapping the laptop in a towel, using my volleyball bag, taking pictures from the trash, having rocks hold down my tent, etc…)
All in all, it was really fun, me and my janky cabana. And I did get several hours of work done. Reading my book out on the rock was a nice change of pace and I’m planning on doing it again soon. I have to admit that, while I was buried in work, I didn’t even notice where I was at. I could have been at my desk or in a submarine. But, when I came up for air, it was really nice to see the plateaus and hikers moving around below me.
Random Learnings or Stories
Hmmmm I don’t have anything for this section. But next week should be fun.