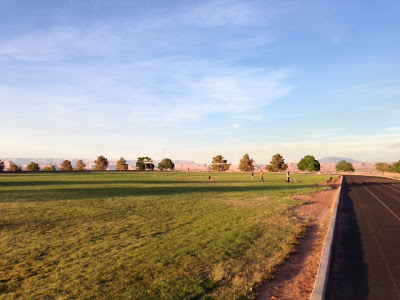 Anyway, we came up with a fun yet challenging workout routine. Basically, one of us ran across the field while another did exercises from the Insanity or P90X videos. The third person rested. When the runner reached the opposite end of the field, we switched positions. Therefore, the rester began running, the runner began exercising, and the exerciser rested. It was a good way to bring interval training outdoors.
In the span of twenty minutes, I did 20 sprints and groups of push-ups, dips, etc… But it didn’t feel like exercise because we were outside working together.
If anyone wants to lose some weight, feel free to come join us. It’s the foolproof plan!
Random Learnings or Stories
OK because my mind is still on the middle school workouts, I have to tell a story. It really won’t be funny to everyone who wasn’t there (which is the entire world minus 3 people… so to 6,999,999,997 people, it’s not funny. I like those odds!). If I could go back in time to any period of my life with a camera, this would be it.
After we finished our work-out a week ago, Chris got an unopened Peanuts kite out of the truck. We brought it that day because it was cloudy and very windy. Perfect kite flying weather!
Also, let me say that Windy has never flown one before. For reals. My grown-up sister has never flown a kite in her entire life. I say “has”, present tense, because even now, she still technically hasn’t flown one…
Chris opened the package and dumped out the kite. OMG the thing was JANKY. Even though ‘new’, it already had a hole in it. Also, one of the rods had torn from the plastic and the left half drooped like the kite had a stroke.
In true janky fashion, Windy pulled the gum out of her mouth and used it to stick the rod back to the plastic. It appeared to work OK so we unraveled the string and tied it to the triangular kite flap.
Then we gave Windy a lesson on how to fly a kite. Yep, she needed a tutorial. So we explained that Chris would hold the kite, she’d be about thirty feet ahead with the string reel, and they’d begin running together. After a bit, he would let go and she’d continue running to pull the kite into the sky. I would stay just behind Chris, supervising.
Lesson finished, we all got into place, Chris yelled “GO!”, and everyone took off running.
After a bit, I waited for the kite to lift off. Five seconds. Then ten. Then fifteen. Nothing. So I ran around the side to gauge what was happening.
I saw Chris holding the kite as expected. Windy was holding the string as expected. The string was tied to the flap as expected. But the flap wasn’t on the kite anymore. It had torn completely from Charlie Brown’s face and dangled thirty feed behind Windy. She had no idea and kept running as fast as she could, dragging the little plastic triangle behind her.
Again, you had to be there, but it was soooo funny. Afterwards, Windy tried flying the flap around the field to get her kite flying experience. More awesomeness.