Hi you!
Here’s my 4-pronged update:
Writing
I had a call with my writing mentor yesterday. I’d say it was the biggest beat down I’ve suffered since I began the whole writing thing.
Don’t get me wrong, she was very nice and all of her feedback was constructive. But she tore my work apart. Man did she tear my work apart.
I think, because it’s my second meeting with her and she was reviewing a rewrite, I expected things to go much smoother. Especially considering the notes she gave me. But, from the talk, I got the impression she likes about 2 pages of the 40 I sent her. Why do I get that impression? Because she said “these two pages are the ones that give me faith in you as a writer.”
I’m not sure how to take that.
On one hand, her having faith is probably a good thing. On the other hand, 95% of what I sent is essentially bad.
I sat mostly in silence throughout the call. I wasn’t angry or anything; her feedback is correct. I was just stunned; it all told me how much work I have left to do. If I take a lot of her comments, I’ll basically have to rewrite the entire book. At this point, I don’t think I’m going to. She doesn’t know what the book is about (she’s interested in things other than the overarching idea) and there’s a certain feel that has to remain. Still, I will be incorporating tons of what she said.
For my next assignment, she wants me to rewrite a piece of chapter one. Not the whole thing. Just 20 pages. And she wants me to change the emotional state of the characters. Her ultimate goal is to make everything more real. And I totally get that. But it’s going to be tricky finding how to balance that with the characters’ environment.
This all boils down to me letting go of the “I suck at this” mentality. It’s all about improvement.
But I admit I want the next pages to be amazing! I’m going to work sooo hard! Wish me luck!
Singing
I actually didn’t sing last week. I either had 3 sties or an eye infection. Or both. Either way, it really hurt and my eye was almost swollen shut. I thought I would look weird up there singing with my gimp eye. Besides, I wouldn’t want anyone to catch anything.
I was going to post a picture of it, but I don’t think anyone wants to see that. Especially because of the pretty pictures below.
Also, I am going to capture part 3 of my video tonight and tomorrow. After that, there’s just one part left! Yay!
Enjoying the Area
We went to Zion National Park this past weekend for my birthday. All I got say is HOLY…COW. Man that place is absolutely amazing!!! They’ve been talking it up for weeks and I thought there was no way it could live up to the building expectations. Boy was I wrong.
I guess I expected it to be like one cliff or one trail or something. Nope. The place is huge: miles and miles of cliffs and trails and hikes. And it’s not that far from Page. I’d say it’s about an hour and a half drive.
We went out there early Sunday morning and stayed most of the day. During that time, we did three of the million hikes. We just didn’t have time to do the other trails. One was over 13 miles long (the ones we did were about a mile each).
Anyway, I wanted to post some pics then list some of my favorite moments.
Here are the pics: 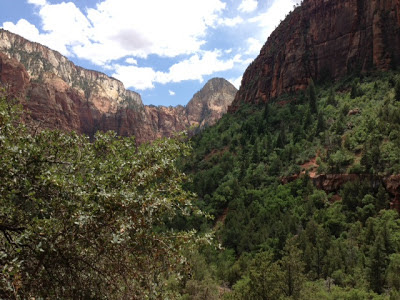 This was one of a million pics I had that show how
beautiful the place is. There was so much depth! 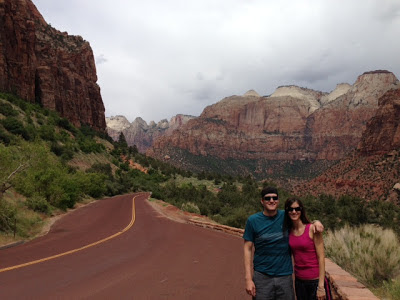 This was near the entrance. You can see the terrain
is quite different from the first pic. The first one
was closer to the river so it was much more lush. 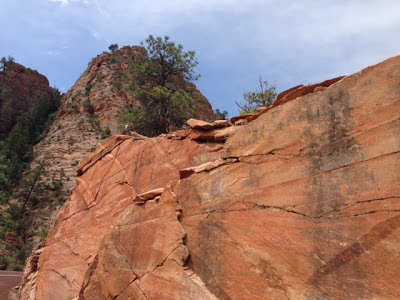 If you look really close, you can see a bighorn sheep
standing on top of the cliff! 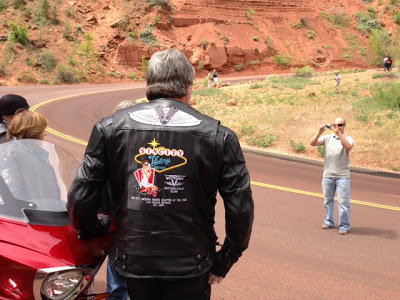 The biker looked really scary but he was very nice.
He asked Chris to take a pic and I took a pic
of me photo bombing that pic 🙂 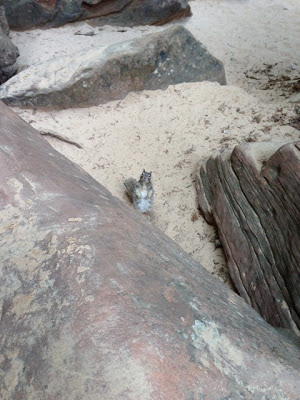 The squirrels at Zion aren’t afraid of
anyone! Even though it’s against the law,
I assume tons of people feed them.
They are really fat.
And here are some of my favorite moments:
Random Learnings or Stories
I’m house sitting for Windy’s boss over the next week and a half. As I mentioned before, she has a really beautiful house, and I set my office up on her second floor overlooking some big trees and the neighbor’s yard.
I didn’t know this, but the neighbor has children who just got out of school. There are two of them, a boy and a girl, and I’d say they’re around ten. Actually, the girl is probably a year or two younger and looks to be the tag-along. Every day, they run outside in the morning and play around the backyard for awhile. Then, they hop on their bikes and scooters and zoom off. Throughout the day they’ll return to the house and goof off in the back yard. On Tuesday, they were throwing paper airplanes around. The boys are mean to the girl but still let her play. I’m guessing the mom made them.
I’d like to take a time lapse video of where their bikes and scooters ended up. I swear every time I looked out that window, they were in a different place. And never upright or organized. The scooter was lying sideways in a puddle. The bike was thrown in the grass. I admit part of me was confused. I was like “it takes five seconds to put up your crap!”.
Wow, how grown up am I?!
I forget how ‘in the moment’ kids are. Right then and there is really all that matters. And taking the five seconds to put up your bike is five seconds of what could have been amazing fun. Not a second is wasted on what isn’t fun.
When I suffer nostalgia, it’s always because of my childhood mindset, not what I was actually doing. I mean, I could jump on a bike right now if I wanted to, lol. But, as a kid, I never worried about productivity or the future. I was always focused on that moment and making it as fun as possible.
When it’s all said and done, I like being productive…but I admit I’d love to have times where I could just check out and live now, now, now. As it is, a lot of my thoughts are tainted with what I should be doing, rather than what I am doing.