Four readers are in various parts of the book (the fifth reader needs to respond to my message – you know who you are, lol). I’ve received a bit of feedback and, so far, things look really promising. There are a few questions and one reader didn’t like the repeated use of a certain word. But what they’re taking away from the book – holistically – is pretty much what I intended.

However, they still have a ways to go: I’m not sure anyone has made it past the halfway point yet. But I hope the journey continues how I planned.

I am CRANKING away on my new book. I think everyone has their preference, but, for me, writing in first person is easier than third. The other book is in third and I found myself writing about 2,000 words a day on average. I don’t think that’s terrible (depending on which author you ask) but I admit I was aiming for 3,000. Sometimes I achieved it, but other times I’d struggle to reach 1,000.

With this book, I have written at least 3,000 words a day. On Monday, I wrote 4,500. It’s crazy! Honestly, I think this book is less complicated than the other one. So that probably has a lot to do with it.

The problem glaring at me is: I’m not 100% sure where it’s going yet. I have an idea, but I’m not in love with it. I do like the way things are turning out so far, though.

We did some more run thrus of my skit and the filming direction is pretty much set. Because the Android can pause during recordings, we’re going to try to film it in a way where no editing will be needed. I’m not sure if it will work, because I don’t want it so incredibly amateurish that it ruins the content.

Also, I’m going to order a boom microphone for Android. That way, we can try to avoid some of the sound issues from my singing video. Did you know it’s actually called a condenser shotgun mic? I had no idea! I’m such a newbie.

Once those logistics are nailed down, we’ll work on the setting and ‘talent’. By ‘talent’ I mean a cheesy voiceover actor. One of Windy’s coworkers has some experience so we’re going to try using him. He doesn’t seem entirely sure but he’s going to give it a shot. Therefore, I want to make it as fun for him as possible.

What does that mean?

We’re going to have a small party with drinks and stuff. We’ll play games then, when everyone’s hammered, start shooting. OK maybe not hammered. But I think it will be interesting if everyone is relaxed. And it might be easier for the ‘talent’ to take direction… Snobby talent 🙂

This past week, I sang at Sunday Mass (instead of Saturday) because of a special event.

Near the beginning there’s a part I sing with the congregation. It’s something we don’t do on Saturdays so I’m not used to it. Based on our discussions, here’s the way it’s supposed to work:

The CD lady starts the track (so I can get the pitch) and mutes it after a few seconds. Then I sing the rest of the piece acapella.

The CD lady started the track and muted it after a few seconds. Step 1 achieved, yeah!! However, the priest didn’t turn off his microphone and started singing along. REALLY LOUDLY. Because we’re both using mics, our volume rivaled each other.

As the song progressed, he slowed the tempo down more and more and more. By the halfway point, he was crawling. Seriously, he was singing like those old record players on the slow speed (did I just date myself?).

Here’s the deal: He warned me about his. Yes, he actually pulled me aside before the service and told me he sings slow. “But don’t slow down with me!” he warned.

Because we sang at the same volume, the congregation didn’t know what do to. Half of them joined him and half joined me. It was like the Immaculate Heart of Mary Civil War: Brother Singing Against Brother.

In the midst of all this, our CD lady was freaking out. She didn’t know that father had talked to me about the tempo. At the halfway point, she finally panicked and unmuted the CD volume. Welllllll, it was at a completely different spot in the song than both me and father.

So we had three very loud versions of the song, all at different places. The civil war turned into a triple war as some people started singing with the CD.

I didn’t know what to do and stopped for a second, thinking “Father told me not to slow down.” So I did the only thing I could think of: I jumped to the CD and started singing along with it.

I can proudly admit that I won the war. By the time the music ended, virtually everyone was singing with me.

OK maybe not, but I was glad it was over.

I actually didn’t go anywhere over the past week. I’ve been working on the new book and singing. Hopefully I’ll have something next time!

This past weekend, we went to Windy’s boss’s house to help her with some craft projects. Basically they wanted to make decorative picture frames and things like that.

The afternoon was actually really fun as a small group of us worked, laughed and joked together.

Here were my favorite moments:

1. OK First we have to back-up a bit. On the way to her house, Windy’s boss asked us to pick up some fake flowers from their office. We stopped by and grabbed a BUNCH arranged in a little glass vase. When we arrived at her boss’s house, Windy volunteered to take the flowers. I hesitated. You have to understand that Windy is kind of a klutz. It’s really funny actually. She can find a way to trip on or run into anything (she rams into things at night when she goes to the bathroom because she keeps her eyes closed for fear of seeing our mom’s ghost). Knowing all this, I said “This isn’t going to go well.” Of course she wanted to prove me wrong. So she picked up the vase and carefully walked a few steps. Then a flower fell out. When she bent over to pick it up, the vase tipped, dumping everything on the ground. Observe: 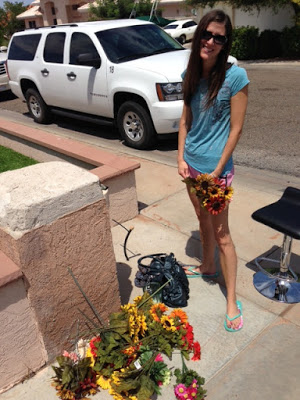 2. I appreciated the invite and was happy to socialize and help. But there’s one thing they didn’t realize: I didn’t get the artsy gay gene. I’m sure people think “he must be able to dance and sew and scrapbook.” NOPE. I can’t do any of that. Don’t get me wrong, I’d love to be crafty. But anything I touch usually turns to doo doo. I just don’t get how to make things look good, including myself when I’m shaking it on the dance floor. At first they asked if I would decorate picture frames. I had NO idea how to do that. So I ended up making crosses. Here’s how it works: You take thick wire and bend it over and over until it forms a cross. When that’s done, you string beads and wrap them neatly around the cross. Yeah, doesn’t that sound impossible? This was my first try: 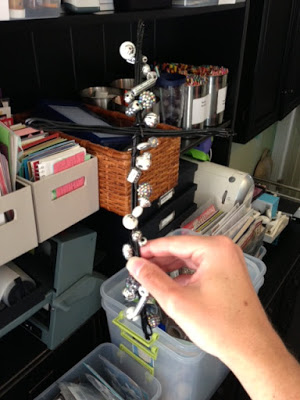 I’m sure they regretted asking me: it looked so trashy. However, what I lack in craftiness, I make up for in resilience. I wasn’t not giving up on those damn crosses! Jesus was going to die in style or I’d die trying! After messing around with a couple, I finally produced this: 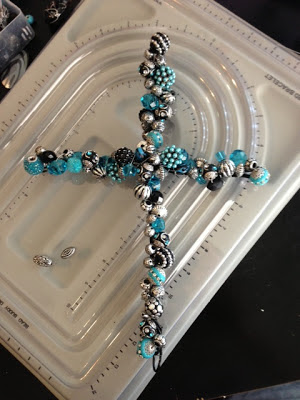 3. While we worked on projects, the boss’s husband decided to relax (he refused to have anything to do with such girly projects). We caught him out in the Little Tyke pool they inflated for their grandkids: 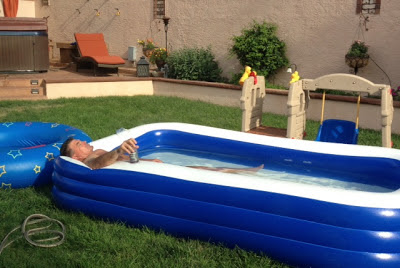