One of my readers has finished the book and provided feedback. I admit I was really nervous when opening that e-mail, but her comments were very positive. Honestly,  I was downright blown away by how much she seemed to like the book. I don’t think it’s going to be that way for everyone, but it’s nice to get that kind of response. Especially from the first person (a person who doesn’t typically read books like this).

A second person is approaching the end and said he made some extra time to read because he was “sucked in.” Another great thing to hear. At this point, I’m feeling pretty jazzed. It’s my first novel and if a couple people are drawn in, I consider that a success. Well I hope more people like it, but I’m still happy.

On the down side, it is taking a bit longer for people to get through the book. I don’t blame them at all (unless they haven’t opened it :p). It may be indicative of a slower paced book. It’s not meant to be an action novel but I want people to be excited to turn the page. Therefore, I may try to tighten up some scenes for the next draft.

Speaking of the next draft, I’m already reaching out to a few new readers. If you’re interested in checking it out, let me know. This should be the last draft before going public in some form.

I’m well over 100 pages into the new book. It’s really exciting to have written so much (especially on another book!).

However, I got really, REALLY frustrated with it over the last week. I’m at a point where I need to blow out some plot points. Essentially, I want to have an idea of where a certain piece going. But I can’t nail down something that feels right. Therefore, I took a bunch of drives over the weekend and spent hours thinking.

Yesterday, I finally came up with something that feels OK. Based on that, I drew out a big chart with different timelines and plot pieces. I don’t know if it’s “the one” but I’m going to start running with it to see what happens.

This book is going to have a lot more interaction than the first. And it should be more exciting, in some ways. So, even though the first book seemed much more complex, this one has its own set of problems that I’ll need to deal with.

While I’m waiting for the boom microphone and adapter to arrive, I’ve started practicing my next singing video. It’s going to involve me playing the piano so it should be pretty cool. And before you think I’m all talented, I should say I only know how to play one song. LOL, so I’ll only be on the piano for this one video. Unless I decide to sing ‘Chopsticks’ or ‘I dropped my dolly in the dirt.’

(NOTE: Those who know me and my one-dimensional piano skills should immediately know what song I’m referring to).

I also have an idea for another singing video and it’s VERY ambitious. The song is very high and I don’t want a piano version; it needs to have a full orchestra. I’m just not sure if you can find a piece like that without vocals. I’m thinking of checking out some karaoke stuff.

OK I just searched for like two minutes and found something that should work. LOL. OK that was a little easier than I thought. Go Interwebs!

It’s been raining like crazy here the last week or so. Windy and Chris told me about something really cool that happens when downpours hit Page. Essentially, Page is on a plateau of rock. So after the non-porous terrain soaks up what it can, the rest of the water rushes for lower ground (damn you, gravity!).

This makes for really cool mini-waterfalls that can be found all around. You just have to drive a couple minutes outside town and look at the plateau walls surrounding Page. Waterfalls of different shapes and sizes are scattered all over the place. We made a quick loop and spotted eight or nine different ones. That was just a cursory glance so I’m sure there are lots more.

They aren’t like Niagara Falls or anything. But they’re really fun to see: 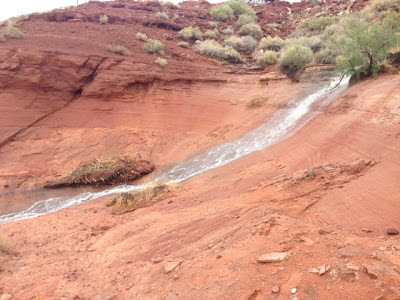 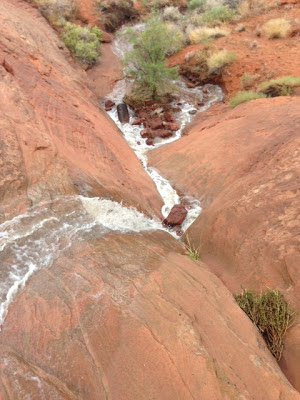 This is just another cool little scenic thing about Page. And the waterfalls run for hours! We went looking for them after the rain stopped and drove around for about a half hour before parking. Then we played around in one for about an hour and it was still running. We had fun building a makeshift dam: 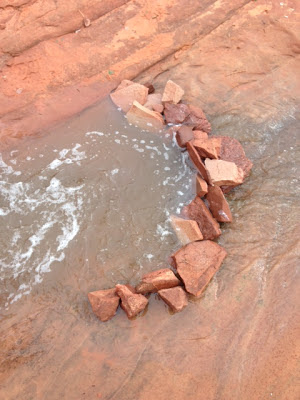 Speaking of storms, I wanted to talk a little about Wag Effect. All right, those of you who know me well are about to groan. But it’s important and my voice will be heard!

What is Wag Effect? It’s basically a special Murphy’s Law for the Wagner family (Wag effect. Get it?). With a few of our family members, when something can go wrong, it will.

Wag Effect doesn’t happen for major, earth-shattering things. No, it just likes to rear its ugly little Wagner head (complete with a huge nose) for things like grocery store lines, coin flips, etc… Seriously. If I pick a line at the store, it will take the longest, no matter how promising. Mine will be the line where the person in front of me somehow gets decapitated and I have to wait for the cleanup. If I drive through a city, I will hit every red light in existence. I swear I’ve seen them spring up out of the ground just to mock me!

Now I know what you’re thinking: ‘That’s crazy’ OR ‘Everybody thinks they have the same thing.’ But, in time, my close friends agree with Wag effect. One of my friends hates driving with me. After several months, he was like “you really do hit every red light.” And I was like “Duh.”

I mention this for a few reasons. First, if you feel very sorry for me, I’ll accept donations for the “Wag Effect Research and Elimination Fund.”

Second, a dear friend of mine brought it up last week. He said that he actually thinks about it when he’s alone and tries to combat it. LOL, he said if he’s in line at the grocery store, he’ll think about it before picking a line. I didn’t know it had spread like that. Don’t let it consume you, people!

Third, Windy and Chris went out of town for their anniversary this weekend and a HUGE case of Wag Effect hit:

I told them I’d watch the dogs while they were gone. Normally this is no big deal. Their dogs are REALLY good. Except when it storms. Then one of the dogs, Molly, FREAKS OUT. I mean she 100% absolutely freaks out. When it thunders, she runs around barking and whimpering and jumping. And she won’t stop. She jumps on everything and even breaks stuff.

Well, wouldn’t you know it, the day after Windy and Chris left, Page had THE worst storms I’ve ever seen. It seriously thundered for about seven hours straight. Oh my GOD, Molly was a mess. But I couldn’t put her outside because of the rain. So I had to deal with her losing it in the house. At one point, I was doing a workout that consisted of about two hundred pushups. Molly kept freaking out and crawling under me while I was doing them. Then she’d try to squirm there and lick my face. I did about 200 push-ups and she licked me about 300 times.

Now for those of you who are thinking “The rain couldn’t have been that bad. You noticed it because you were alone,” here’s my proof: a video showing canyons filling and roads being ruined during that storm (IT WAS CRAZY!).

For those of you who don’t believe now, I fart in your general direction.