I estimate I’m about 70 percent done with the fourth draft of the book. I must admit, I’m pretty pleased with the changes so far. This draft is taking considerably longer than the last (surprisingly) but I’m really trying to clean things up. That and the new chapter 2 are adding to the delays.

I think the changes will be worth it. And I really anticipate the fifth draft being the final one. Any changes to that draft should be small.

After that, I need to run it through a copy editor then the book will be ready to submit!

I will write some more stuff on publishing once I get to that point. It should be soon!

I still haven’t touched the new book. When I finish the fifth draft of the first book, I’ll be hopping back into this one.

I’m now diving into the Fall Festival, where I’ll be singing next week. When that’s finished, the video will become a higher priority.

The Josh Groban concert was last week and it rocked! I had soooo much fun!

I know I had this huge build-up last week about my trying to sing with Josh. And the results of that were kind of lackluster. No, very lackluster.

First, the meet and greet my sister got to do was a bit disappointing. See, her boss got them backstage passes to meet Josh. Windy said that, at times, Josh will actually bring someone on stage and let him/her sing (EEK!). We talked about it and Windy said she might suggest me if their conversation went well.

Just for fun, I wanted to share how my and Windy’s typical discussion went:

Me: Ask him to let me sing!

Windy: I think you’d do good.

Windy: But I can only ask if he likes me. I’m nervous! I don’t know what to talk to him about.

Me: Ask him about his Kanye West tweet song.

Windy: Good idea! Then I can mention you!

Seriously, we spent quite a bit of time discussing this. Yes, we are sad.

Unfortunately, because there were so many people waiting for Josh (fan club members, contest winners, etc…) she only got to say hi and take a picture with him. That’s it. She said her time with him lasted all of about thirty seconds, so she didn’t get to talk about Kanye West tweets, much less me singing.

Second (did you even remember I was listing reasons?), the stage wasn’t a typical concert stage where the group performs at one end and the front row is right there the entire time. No, this stage was in the round: 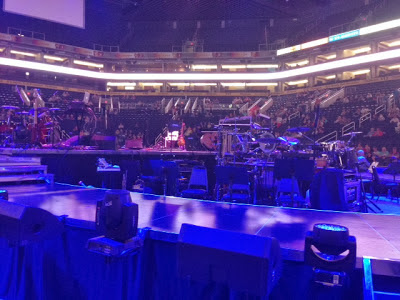 During the concert, Josh walked around the entire thing and also did a lot of singing from a platform on the middle. It was amazing, but he was rarely close enough to hear me sing. That didn’t really matter, though, because…

All in all though, it was an awesome concert. He is an AMAZING singer who sounds just as good in person. Seriously, his voice can like melt trees. Or a better analogy.

Finally, for any of you who are wondering, this whole thing about singing with him was really just a fun joke Windy and I ran with.

Unless he brought me up on stage (I’d be so nervous!).

One odd tidbit of information: Josh wore really, really, REALLY tight jeans. Seriously, all 6 of us who went randomly commented on it. His junk was like, BAM, right there in your face. Maybe it’s his way to attract all the 45-year old women who go to his concerts?

This past week, we began putting up Halloween decorations. It was really fun. Windy and Chris said their part of town gets almost no trick-or-treaters, so she’s trying to do everything in her power to attract kids.

Sooo, we went out and bought supplies to bring in the kiddos.

After looking at what we had, we decided to divide the decorations into two sections: a cemetery and a cauldron area.

The cemetery was fairly standard with different tombstones and bones, some of which lit up. We built it next to the house, because there aren’t enough decorations (yet) to really fill the yard. Also, we’re afraid of hooligans coming along and steeling everything. This is what it looks like so far: 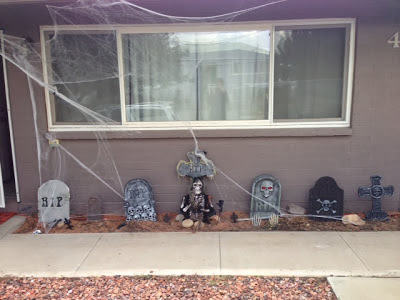 The cauldron area actually turned out really cool. Here’s how it started –

Windy and Chris have a row of ghost lights they bought last year. They had planned on lining the sidewalk with them, but they block the cemetery. So we discussed ideas and decided to make them ‘worshipping’ ghosts. We put them in a semi-circle around a cauldron and they look like druids. Well, happy druids because the ghosts are very smiley.

For the cauldron, we just picked up a black storage bin (it was 5 dollars compared to the 25 for a real one).

When we set it up, we realized it was kind of blah. The ghosts were just too dang happy and the cauldron didn’t look real.

We found a female ghoul at the Party City in Phoenix and were immediately like, “whoa she’s creepy!” Check this out and tell me it’s not one of the eeriest things (for $12) you’ve ever seen: 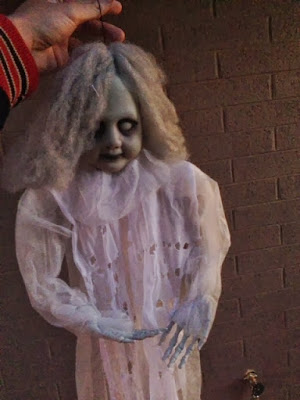 She was so creepy that we wouldn’t let her in the house after we bought her. We ended up stashing her in the garage until we decided exactly what to do.

After talking about it, we came up with the idea to hang her over the cauldron. That way, the ghost druids are worshipping the ghoul girl emanating from the cauldron. To make it look creepier, we hung her using invisible fishing line so it looks like she’s really floating. I think it ended up looking pretty good: 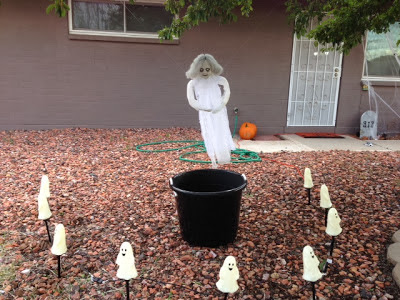 From the street, you can’t see the fishing line at all. That and a strobe light under her make for a super eerie scene at night (still, look at the happy ghosts!).

This post is getting pretty long, so I’ll add a random insight or story next week.

In honor of our new creepy ghost girl, I wrote a couple of short haikus: