I’m halfway through the last chapter of the book. At this point the fourth draft will be done any time now.

I’ve also found a potential copy editor, yay! She seems to have a LOT of experience. The problem is, copy editing services are more costly than I estimated. In fact, that service alone could single-handedly blow a big part of my budget.

Luckily, the lady is SUPER cool so far and has agreed to read the first chapter –for FREE! – and provide initial feedback on how much work she thinks is needed. If it’s fairly buttoned up, she won’t charge as much. I really like that because some books obviously need a lot more finessing. However, I have no idea where my book stands in relation to others, so she could take one look at it and tell me I need to win the lottery.

I still haven’t touched the new book. When I finish the fifth draft of the first book, I’ll be hopping back into this one.

Fall Festival is over so the video is now being pushed to the front burner. YEAH!

OK the Fall Festival I’ve been talking about forever was this past weekend. It was really super crazy but totally fun.

Being such a small town, I was hella impressed with the festivities my sister’s company put on. They had everything from pumpkin carving contests to funnel cakes to business challenges to singing to games to … Well, it had everything. It was really one of the most impressive festivals I’ve seen.

I’ll talk more about other specifics in the next section but, right now, I wanted to tell y’all about the singing!

OK so here’s what was planned:

Windy’s boss enlisted my services to sing the national anthem each of the three days to open the ‘games.’ In addition to that, they setup a seating area for foodies. Rather than being just a typical food court with janky tables, they created a neat little niche surrounded by hay bales. It was really cool and the tables were decorated to look like wooden seats. All in all, it looked like a cool barn dance dinner (is that even a thing?). To complete the eating area, they set up a section in the corner where a person could perform (kind of like a café). They had myself, a guitar woman, and a guitar man all scheduled to sing throughout the festivities.

The first day, I was SOOO nervous. To help calm down, I downloaded a little pitch pipe app for my iPhone (tee hee!) because I was singing acapella and, if you ever start off too high, the national anthem is a DISASTER (it just gets higher and higher – any of you who have sang it will know).

When they called my name, I walked up, trembling and humming to myself the entire way. However, the DJ was playing music SOOO loud that “Crazy Train” by Ozzy Ozbourne ended up taking over in my head!

By the time I was on stage, the entire melody from the national anthem was replaced with “I’m going off the rails on a crazy traaaaaain.”

Trying to push it away, I approached the DJ who quieted the music, handed me a cordless mic, and announced me.

There was no prep time! I just had to go. On the verge of throwing up (and still thinking of Ozzy), I walked to the front of the stage and saw everyone looking at me. I closed my eyes for a second, launched my trusty pitch pipe app, and played the note in my ear. Then I took off singing.

And it went really well!

I didn’t pull a *fill in the blank celebrity* and forget all the words. No, I did everything pretty much perfectly.

The second day? Not so much.

That second day, everything started off AMAZING (and, coming from me, that’s saying a lot). It was going so well, in fact, I actually forgot all about my nerves and got into the song. And, in turn, I lost every bit of support.

When I reached the highest note (“And the laaand of the FREEEEEEE”), it was all gone and I missed the note horribly! OMG it was just awful. I talked to some people afterwards and one woman said, “Yeah, I hear this one note and cocked my head thinking, ‘that’s not right.’”

I wasn’t in a great mood the rest of the day as I tend to obsess over things.. UGH.

Fortunately, the third day went much better. I focused on support and one woman said that I gave her goose bumps. YAY!!

OK the singing section seems really long and I haven’t even talked about these performances. Wellll, not to worry: the ‘café singing’ didn’t go quite as expected.

I ended up putting in HOURS  AND HOURS of practice, putting together song lists and downloading music. I even picked up the P.A. system and set it up in our house so I could practice (and totally annoy Chris… it was justified as I sang for HOURS with the volume cranked). By the time the first day rolled around, I had assembled some Josh Groban songs, a couple music numbers, a Green Day song, and a Bush song (Glycerine!).

But I never really got to perform, thanks to the DJ.

He played SOOOO loud that you couldn’t hear anything else. They actually got me in the café the first day and the DJ was so noisy, I couldn’t really hear from my little setup. And people were coming by, confused, because it’s like me and the DJ were engaged in some weird music battle (straight out of the movies… You got served DJ!).

Anyway, they ended up fading back the café performances so the national anthem was my real spotlight time.

Actually, let me rephrase that. I actually had a small group of strangers request me after my first pseudo performance. It was really cool! A girl came up to me and said, “We liked you more than the DJ.” I admit that felt pretty good 🙂

Because I’m talking so much about the Fall Festival, I might as well mention all of my favorite moments:

1. First off, they basically had me judge EVERYTHING:

a. The first thing I judged (with Windy) was the pumpkin carving contest. There weren’t really any criteria other than ‘select pumpkins we think are cool.’ With that in mind, we walked around the submissions (about 20 of them) and noticed that, in the group, there were 19 amateur submissions, and 1 totally professional one. It really wasn’t fair. Don’t get me wrong, some of the pumpkins were really great. For example: 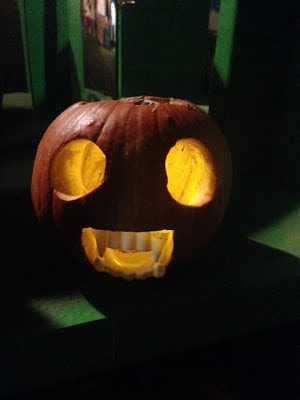 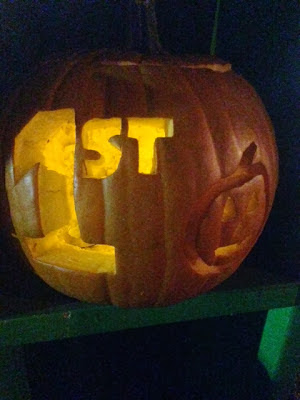 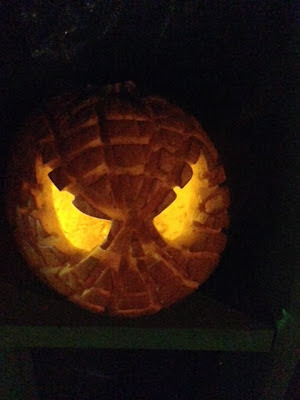 But try comparing them with the winner: 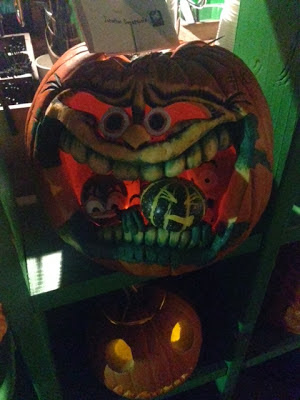 b. On the third day, me and two ladies judged the beauty pageant. This one was interesting. They had planned on creating all these categories and giving out all these prizes. But, when it was all said and done, they received all of 5 entrants. And the contestants were all in the same age group (5 and under)! So that meant all the other categories were nixed and we had to deal with one. To make matters worse, we had 2 awards to give out per age group, then 2 overall winners. If you do the math that means 4 little kids would win something, and 1 wouldn’t. UGH. When we realized that, all of us judges just hung out heads. Luckily, I convinced them to do a last minute change and create 2 sub-categories. That way we could give out 2 awards to each group, then have 2 overall winners. Doing that gave us 6 awards to dole out and everyone got one. I’m really glad they agreed because everyone was so stinking cute: 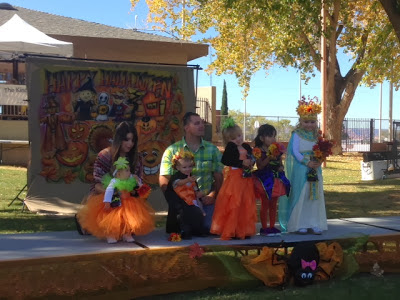 c. On the third day, myself and two others judged the costume contest. And I must say, if the pageant was an exercise in emptiness, the contest was one in ‘OMG there are a million trillion people!’ It was unbelievable! We had almost forty contestants in each category, including a ton in the 17+ division. Unfortunately, we didn’t have enough prizes to award everyone so we had to choose finalists and eliminate everyone else. The sad part was, we didn’t really have a set plan, so we ended up just calling finalists forward while the ‘losers’ just stood awkwardly behind them. It sucked, but some of the costumes were incredible. Here were the group winners: 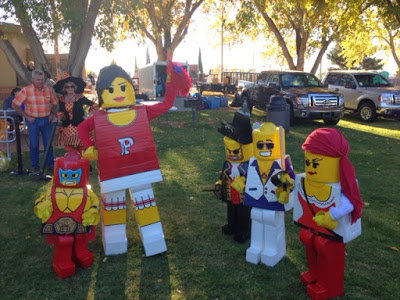 2. Moment of fate: After the second day, Windy, her friend, and I went to have a couple drinks together. Sitting at a bar, we discussed writers’ group and how it could be better. After lots of talk, we decided it might be good to create a second, more serious group. We have a lot of fun in our current group, but half the members are there more for social reasons than anything else. So leaving that group in-tact fills one need, while a second group would fill another. Wellllll, the very next day, while judging the pageant, I realized another judge was a professor at the local community college. I had never met her, but ended up mentioning writers’ group (and the more serious group). She LOVED the idea! So much so, that she asked me to come speak at three (three!) different classes they are teaching. She really thinks a ton of people will start coming. AAAHHHHHH!! After this happens, I was really stunned. I mean, here we were talking about this just a handful of hours before, then I met the perfect person to make it happen.

3. One of the funnest moments of the festival was the business challenge. Each year, a handful of businesses compete against each other for a huge trophy. This year’s events consisted of an obstacle course, pumpkin throw, giant game of Jenga, egg smashing, and a treasure hunt. Watching the teams go at it was hilarious! Especially in the obstacle course. Instead of a traditional course, they inflated a huge bounce house and had the teams run through it. OMG it was awesome. The grown-ups were bouncing and flailing around trying to make it through. In the end, an all-female team (they’re awesome!) took home the trophy: 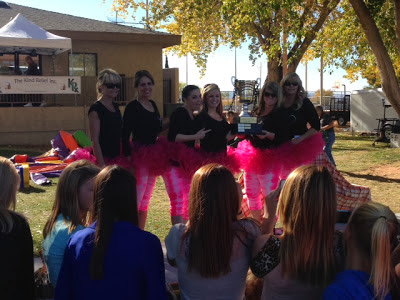 This post is really long, so I’ll add a random insight or story next week.

Actually, how about I say this:

I’m leaving for Dallas in the morning. I haven’t been back since February so it should be really interesting. I’m sure I’ll have some fun stories out of this trip.

I’ll have a story next week when I get back.