I submitted the book to more agents and am awaiting responses now. I still have about 20 agents left on my list, but at this point I’m going to look at making a few more edits.

See, most agents only want the first 10 or so pages of your book. So you can write the most amazing piece of fiction out there, but if the first 10 pages aren’t attention-grabbing, nothing matters. I’m looking at enlisting the help of an editor again, whose sole focus will be to get those first pages as amazing as they can be.

I don’t want it to be like I’m shunning the rest of the book, LOL. But I think, as a whole, the story feels solid. I just want to make sure the introduction matches the rest of the novel.

Another reader finished the book and said she really enjoyed it (thanks Miki!). She said that, while she planned on taking notes, she got so caught up in the story, she didn’t get around to it.

That makes me feel so good 🙂

She did have one really poignant critique about the opening chapter. I’m trying to integrate some back story, but feel it’s too abrupt and not seamless enough. Her comment affirmed that so I’m going to make some revisions.

There are lots of different ways to throw in things like back story and descriptions (characters’ pasts, appearance, interests, etc…) and the current writing “trend” is to give the info in little manageable chunks.

I’ve read books where entire pages were spent on back story. But because readers’ attention spans are so short nowadays (what with the Internets and the Twitters and the MySpaces), they need to get into the action right away. Therefore, no more than a few sentences at a time should be giving regarding back story and other descriptions. That way, readers don’t get bored.

I am attempting to do that in the first chapter of the book, but there’s one particular jump that’s too jarring. Over the next few weeks, I will address it.

My twin sister asked me to sing at her wedding here in a couple weeks.

She’s marrying her girlfriend and they are having a reception near Milwaukee (after the wedding in California) on a frozen lake. People usually do that stuff when the weather is beautiful, but I think this is a really cool idea. There should be snow and ice all around and, from what I’ve heard, the setting looks amazing (especially in winter). I’m even thinking we might be able to walk out on the frozen lake. I’m scared though; I’m really clumsy and also suffer from the world’s worst case of Murphy’s Law. If someone is going to fall through the ice, everyone know it’s going to be me. An elephant could tumble out of a plane, collide with the lake, and barely crack the surface. Whereas I’d barely touch my toe on the ice and end up crashing in.

Anyway, the song they chose for me to sing is Ave Maria. It’s such a pretty tune and, fortunately, I’ve sang it before. Ironically, though, I’ve only ever performed it at funerals.

WAIT! I sang it at my little sister’s wedding, LOL! I guess I consider it the day her happiness and freedom died… I’m kidding Chris! 🙂

Right now, I’m scouring iTunes for the best rendition of Ave Maria for my vocal range. At this point, it looks like the Celine Dion version will work, LOL.

Also, because I didn’t get to record my O Holy Night at Christmas, I’m hoping to film me performing in Wisconsin so I can post it. Stay tuned!

Hmmmm I didn’t really explore anywhere over the past week or so. But I did run up and down the street with sparklers at midnight on New Year’s, so I’ll talk about that 🙂

New Year’s has always been a pretty big deal in my family. Growing up, it was the one day we really got to spend with my dad. See, he worked sooo much trying to support his million kids, that we didn’t hang out with him as much as we wanted to.

Because of that, New Year’s became our “dad holiday.” While mom made cheese balls and dips, dad spent the entire time playing board games with us. We’d literally start on New Year’s evening and play games for 24 hours straight (with a few hours’ sleep thrown in). During that time, we’d play Clue, Masterpiece, Mousetrap, Bigfoot, Spades, Pictionary, Run Mousy Run, Lay an Egg, Fat Chance, and tons of other games. (SIDE NOTE: If you look closely at that list, you’ll notice one game is missing: Monopoly. That’s because Monopoly sucks! :)) It was really fun. And dad wasn’t competitive at all (unlike me) so he’d pretty much let us win everything.

Years later, we still carry on the tradition of board games at New Year’s. And we still have just as much fun (maybe the alcohol has something to do with it?).

This time, we decided to mix it up a bit and play a games we haven’t touched in awhile. We were worried it wouldn’t be fun, because a lot of our less-played games stink. But the evening turned out to be a blast!

Incidentally, my new/old favorite game is called Hands Down. It looks like this: 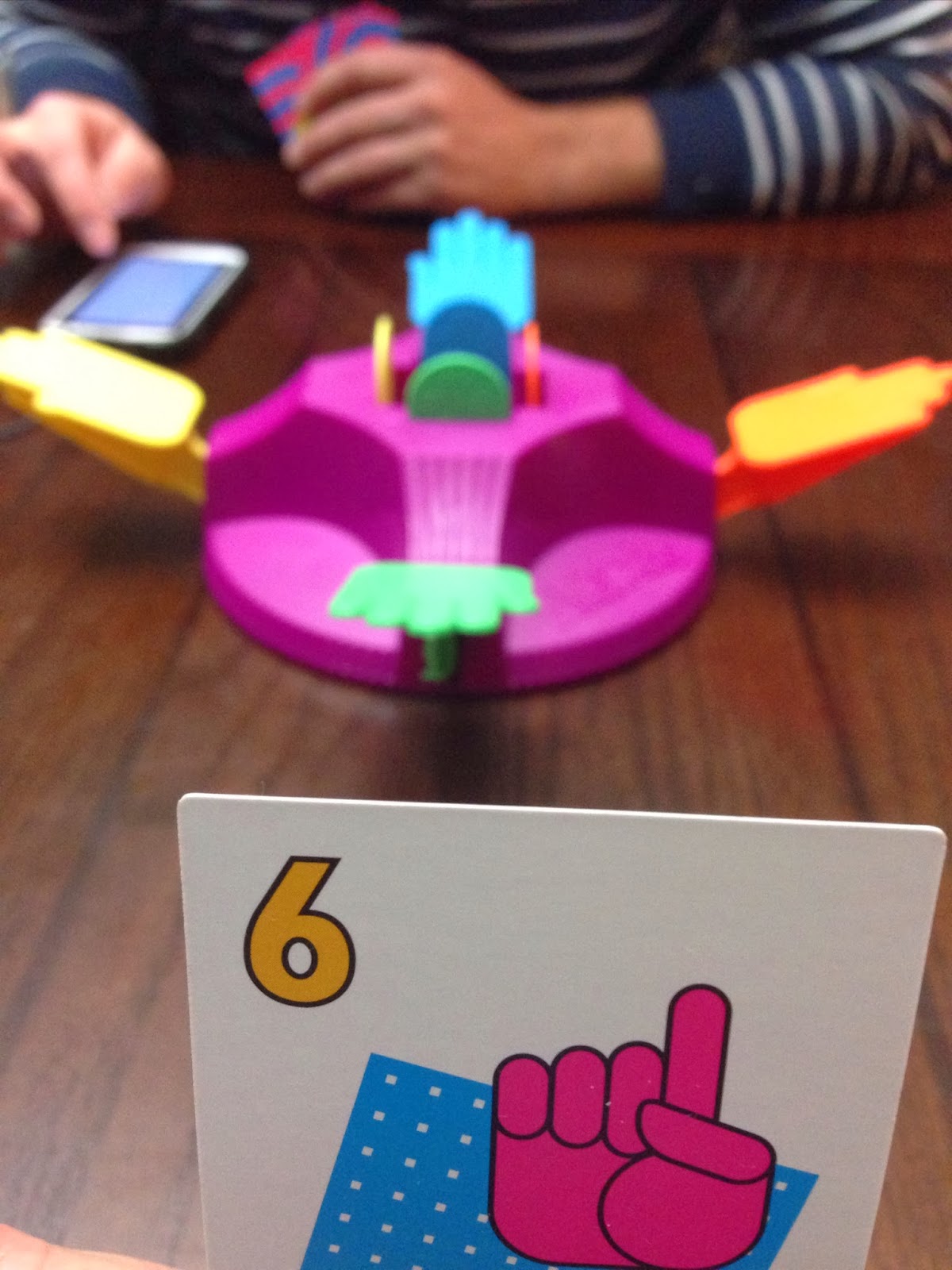 It’s meant to be a kids’ game, where you form pairs of cards then slap the hands (and the last person loses). It’s really simplistic but we had an awesome time with it. Or should I say Chris and I had an awesome time with it. We were literally crying laughing, because Windy lost every. Single. Time. Seriously. Every time. She even put her hand right by the plastic hand to cheat… and still lost! I think her brain is fast but it just takes a second for signals to reach her body, LOL. At one point, she thought she’d won and screamed “YES!!” only to look down and realized she’d lost again.

Since everyone is posting and commenting about the New Year, I guess I should do the same.

As everyone who reads my blog knows, my year sabbatical is about over. During that time, I feel like I accomplished a lot. I’ve written two books, posted almost fifty blog posts (fifty!), penned several short stories, worked with two mentors and an editor, started a writers’ group, read seventeen trillion articles on writing, sang many times at church, and the list goes on and on. Well maybe not on and on. Maybe just on.

When I stop and read that, I can’t help but feel proud. I feel I’ve really done a lot.

But then my practical side kicks in and tells me I’m still not nearly as skilled as I want to be. Consequently, nothing monetary has come from my work this year. I haven’t really made many connections or sold a story or anything. I don’t want to give the impression this is about the money. But, at some point, I’m hoping to be able to make some sort of a living writing (even if it’s only part time).

When that hits, I think of all the extra work I could have done practicing or networking this year.

My efforts certainly could have been better but, all in all, I have to feel pretty good about the past year. I just hope that I can keep it up.

OK now, with that said, the big, huge, gigantic question is this:

Honestly, at this point, I’m not entirely sure. I still have enough savings to last a few more months, so I am gonna keep up what I’m doing for a bit longer. My immediate goals, then, are to:

I figured those tasks should take me through March or April. At that point, I’ll really have to sit down and look at how the money situation is going to pan out.

Although my free time might take a hit after that, I am committed to keeping up with writing and singing. Consequently, I put together a list of my bigger picture goals for 2014. Whenever I feel lost, I will bring these up and use them as focal points:

2. Expand Writers’ Group. At this point, we are still going fairly strong. But, I have to admit, most of the members are semi-serious (at best) about writing. For some, it’s more a social group than anything else. Therefore, I want to get involved in something more serious. I honestly need mentors and writing buddies, people I can bounce ideas off of (and vice versa).

3. Find other singing opportunities. This past year, I sang at Fall Festival which was great. But this year, I want to do more events.

4. Make my damn video skits!!!!!! I have a lot of fun ideas and I just need to get them produced.

Last week, I mentioned I’ve been working on a new short story called Spirals. To give y’all a heads up, I spent last week putting together an outline (and charts!). Then, throughout the first part of this week, I wrote the first draft. Today, I started on the second draft.

At this point, I’m really liking where it’s going. The story is much racier than anything else I’ve posted, so be warned! When I post it (in the next week or so), I’ll put another warning there.