OK I think the first book is about as good as it’s going to get. I’ve rewritten the first paragraphs at least seven million times and I can’t do anything more.

As soon as the new year comes, I’m going to get off my lazy butt and start submitting it, full force, to agents around the country.

One of the readers finished the book (Thanks JP!!!) and actually made me Skype with him so we could talk about his slew of thoughts.

The call was EXTREMELY helpful and I received lots of useful notes.

First off, he seemed to be really engaged in the book. He actually read it at Disney World instead of sight-seeing! See that should tell you to buy my book. The tagline is going to be “Camp NO Where – More fun than Disney.”

Of course, I won’t be saying anything about how he was really sick and couldn’t actually venture out (so my book was his last resort).

Either way, I’m really glad he got sucked into the book.

On the down side, however, he confirmed a problem I was already worried about. Basically, there’s a huge plot point I’m trying to keep secret. However, I think it has to be more visible so readers will be suspicious. The way it currently stands, that plot point is sooo hidden, it comes out as a complete surprise.

After discussing it at length, I realized I am going to have to make considerable revisions to the book. But hopefully it won’t mean major rewrites.

If anyone read my last blog post, you’ll know the Christmas Eve Mass music was in huge peril. I was basically singing with the dying cat parade and wasn’t sure what would happen.

To get one last practice in, the band members and I decided to meet early on Christmas Eve and do a few run-throughs before the service began.

As soon as we met, I knew we were still in trouble. During our first stab at Silent Night, I cringed as the same wailing ran through the church (SIDE NOTE: It feels weird writing about stabbing Silent Night). Although they had days to prepare, it sounded like none of the kids had practiced. AT ALL.

I’ve never been a teacher or anything, but I wanted to scold them and make them sit in time out. Honestly, part of me wanted to say, “If you’re not going to take this seriously, you can’t play,” but that felt way too grown up for me. Actually, I’ll go ahead and reveal my selfishness by saying the desire to tell them they couldn’t play had more to do with the fact that I didn’t want to be associated with the beheading of the wailing puppies than with teaching them a lesson.

When practice was said and done, we ran through Silent Night four times and they butchered it two of those times. And by butchered, I mean they all started on different keys and the song sounded like when a baby pounds on a piano and screams, LOL. In the other two tries, they managed to find most of the right notes and things went OK.

That meant we had a 50/50 shot of getting it right once Mass started. Those are pretty crappy odds!

So all through Mass, all I could think about was Silent Night and what was going to happen.

When the time came, my palms were so sweaty, I left soak marks in my chair. Taking a huge breath, I stood up and nodded to the French horn player. She nodded back, played through her scales, then we began….

And they started in the right key! Happy Birthday Jesus!

When I heard everything running smoothly, I smiled and began singing along with them.

Then, halfway through the first verse, something happened. From out of nowhere, the French horn player blew a note that was completely wrong.

She never found the right note after that, and it threw everybody off.

So the second half of Silent Night was the butchered mess you heard in the video last week. As soon as I heard the train running off the rails, I had to turn away from the congregation. If I saw anyone laughing, I would have lost it.

The rest of the song went about like that, with me facing the altar and singing REALLY loud to cover up the instruments.

It was kind of a mess but, as soon as it was over, all thoughts of dead cats and mating ostriches fled as I prepared for my solo, O Holy Night.

I had been working on this for several weeks because I wanted to do a great job. And at first, I really wasn’t that nervous. Little did I know, though, the church would be completely packed. There were probably 250-300 people there so my legs began shaking as I started.

Despite the nerves, though, I sounded really great, if I do say so myself. And I NAILED the high note. I mean I nailed the crap out of it.

I was going to have a surprise for everyone and post myself singing the song. But, due to a miscommunication (or something like that), we forgot to record it. So you’ll just have to trust that I ROCKED IT.

Last week, we made ugly Christmas sweaters then paraded them around town, delivering presents.

I’ve never made a tacky sweater before, but it was such a blast. Here’s what we did:

Windy and I went to the local Goodwill store and found the ugliest, cheapest sweaters they had. I ended up selecting a gaudy red woman’s turtleneck, Windy picked a tiny half-sweater, and we got a blue monstrosity with waves on it for Chris

(SIDE STORY: Windy was hesitant to use the tiny sweater because it was a toddler size – for reals! It was so funny, though, that I insisted she get it. I mean, the idea of a Christmas half-sweater is so awesome. Because she was unsure, we asked if she could try it on. The employee refused to let her use the bathroom (although I volunteer with the employee all the time!!!) and they don’t have dressing rooms. So Windy decided to try it on behind a dresser right in the store. It was awesome and one of her employees walked around as she was throwing it on. Good times!)

After choosing sweaters, we went to the Christmas decoration section and began picking out tacky items ranging from bells (made up to look like reindeers) to mini-wreaths to small pillows to poinsettias to birds and everything in between. Then we took our treasures home and began hot gluing them all over the sweaters. 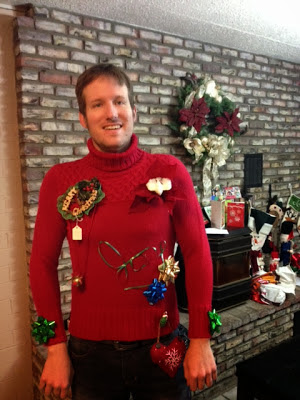 I love it! It’s obviously homemade, but the randomness and ugliness is so much fun. I also like that, begin a woman’s sweater, it barely fits and makes my nipples look gigantic.

I’m seriously considering donating it back to see if they’ll put it on the shelves. You never know, some grandma might buy it. OMG if I saw someone wearing it around town, I swear I would die. But I would die happy.

Merry Christmas everyone!!! I hope y’all are having a great holiday season so far.

OK with that out of the way, I wanted to talk a bit about our Christmas. First off, I have to say it was a really nice holiday. Definitely one of my favorites in recent years. I think it was because, oddly enough, a lot of my mom’s old traditions made an appearance. I don’t think my last post had anything to do with it, but I like to imagine her reading my blog and saying, “Oh I’m not done with my Christmas traditions yet!”

Here were some MOMents:

1. When we were kids, mom wouldn’t let Baby Jesus into the manger scene until Christmas Even. Even though the nativity set looked bare and was obviously missing something (making our friends ask lots of questions), she astutely informed us that “Jesus wasn’t born yet, so why should he be in the manger?”

On Christmas Eve, when we got home from Mass, she would gather us in a random room and say, “Jesus is hidden in this room. Find him.” At that, we would tear up the room looking for a ceramic Jesus wrapped in blue silk. Typically she hid it so well, we could never find him, so she’d end up having to give us “Hot or Cold” clues. I imagine it was a funny picture, with all of us roaming around and my mom saying, “Cold, cold. Wait, warmer, warmer. YES! Hot HOT HOT!!”

Whoever found the Baby Jesus got bragging rights and led a procession to the manger scene while everyone else sang “Away in a Manger.”

I think it goes without saying that mom was freakishly religious.

Anyway, when we got home from Mass this year, Windy randomly announced, “Jesus is hidden in the kitchen. Find him.” Talk about a blast from the past! It was pretty awesome. And I got to realize how freakishly competitive I still am. Chris is just as bad, so we tore up the kitchen trying to find Baby Jesus. It’s kind of embarrassing but I really REALLY wanted to win!

Unfortunately, I didn’t. And Chris really rubbed it in that he was better at finding ceramic Jesuses.

2. The re-gifting I mentioned in my last post came into play this year, big time. Windy and Chris both wrapped up tons of stuff I got last year and gave it to me, again. Windy also bought a 10-pack of socks, tore it open, and wrapped each one separately. Classic mom! I should have known something was up, because I had SOOOO many presents when we divvied everything up. But I was clueless until I open up about 3 pairs of socks and the Blokus game and plastic pigeon I received last year. I did get my revenge, though:

About four years ago, I bought a book called “Thanksgiving” by Janet Evanovich (or however you spell it). I won’t dignify her with looking up the correct spelling because the book is absolute and total crap. It’s seriously one of the worst books I’ve ever read. Windy started it as well but never finished it because it was so bad. Wellllll she got to open it up on Christmas morning as a gift from me.

I’m working on a new short story that I’m really excited about. It will be, by far, the most complicated one I’ve written, so I’ve spent the last couple days outlining everything so that the story-line stays in order. Although I don’t want to give the plot away, I can let everyone know the name of the story:

Intrigued? I hope so! I’m trying to experiment with style on this and had a unique idea on how to write it.