In my last post, I said the next one was going to be about farts. At the time, I was just being dumb; I already had an idea for this post.

Then something happened at writers group Wednesday that made me change my mind. So to all you teenage-guys-trapped-in-grownup-bodies…. this post is for you.

To sound more mature, I’m calling it “How writers can obsess over a single word.” The behind-the-scenes title is “It’s so fun talking about farts.”

At the Wednesday group, a guy brought in an article he wrote about veganism. It was a very satirical essay, listing reasons why veganism is a terrible, terrible thing.

The article broke its arguments into three categories: religious, practical, and nature.

The religious and practical sections were fine and interesting, but I’m here to focus on the nature aspect.

When discussing nature, the author pointed out that animals higher on the food chain kill the lesser ones. He said it’s necessary for two reasons. First, humans are at the top of the food chain. When they don’t do their job (killing other animals), those animals become overpopulated, eating up the world’s resources.

Second, the excess of cattle and such creatures would result in exponentially more flatulence. With an overabundance of animals releasing their methane, the ecosystem could be destroyed.

Fun, eh? It gets better.

When a reader finishes with a piece, he/she typically tells the group what type of feedback he’s looking for. Sometimes people want help with a plot line or maybe a repeated grammar flaw.

When we asked this writer what type of feedback he wanted, he said:

“I’m really looking for help with the sentence: With an overabundance of animals releasing their methane, the ecosystem will suffer. I just don’t think releasing is the best word. I’d like suggestions for a better verb.”

Yep…In his 3-page essay, the author simply wanted help choosing a word that best described a bunch of animals farting.

The most hilarious thing was how seriously us wanna-be writers took the task. We brainstormed ideas for the longest time! Here were some of the conversations that swirled around like… well…. you know:

1. “I think emit is a good word. I can’t help but picture gas eeking out of the animals and floating up into the sky.”

2. “I actually like release. It’s like the cows were trying to be polite but couldn’t hold it in so the farts finally had to be released.”

3. “I prefer force. The animals didn’t choose to be overpopulated so they’re being forced to fill the sky with their farts.”

We went round and round on the best verb. It became a competition.

In the end, who’s suggestion won out? This guy with the thumbs. Go me! Go me!

Since I’m sure you’re all dying to know the word, I give it to you, wrapped in a stinky brown bow:

Isn’t that perfect? With an overabundance of animals launching their methane, the ecosystem will suffer.

In a moment of brilliance, I pictured the cows face down, butts up like rocket ships on a launching pad. When the signal was given and the countdown finished, they let it go, launching their farts into the stratosphere: 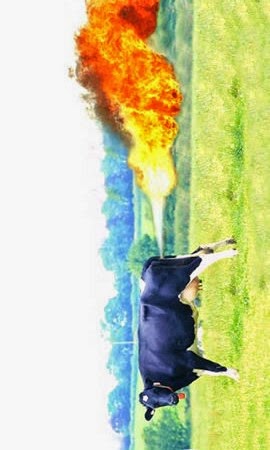 That’s kinda how I described it at group…using hand gestures to convey my point.