Enough time has passed where I don’t dream about her every night anymore. And I have hours long stretches where I don’t necessarily think about her. I guess that’s normal and probably healthy, as you don’t want to get hung up on a person.

However, the anniversary of her death is always a time when I think about her life and what she meant to us. And you can’t think about Mom without recounting her numerous quirks and the ways she made us laugh. 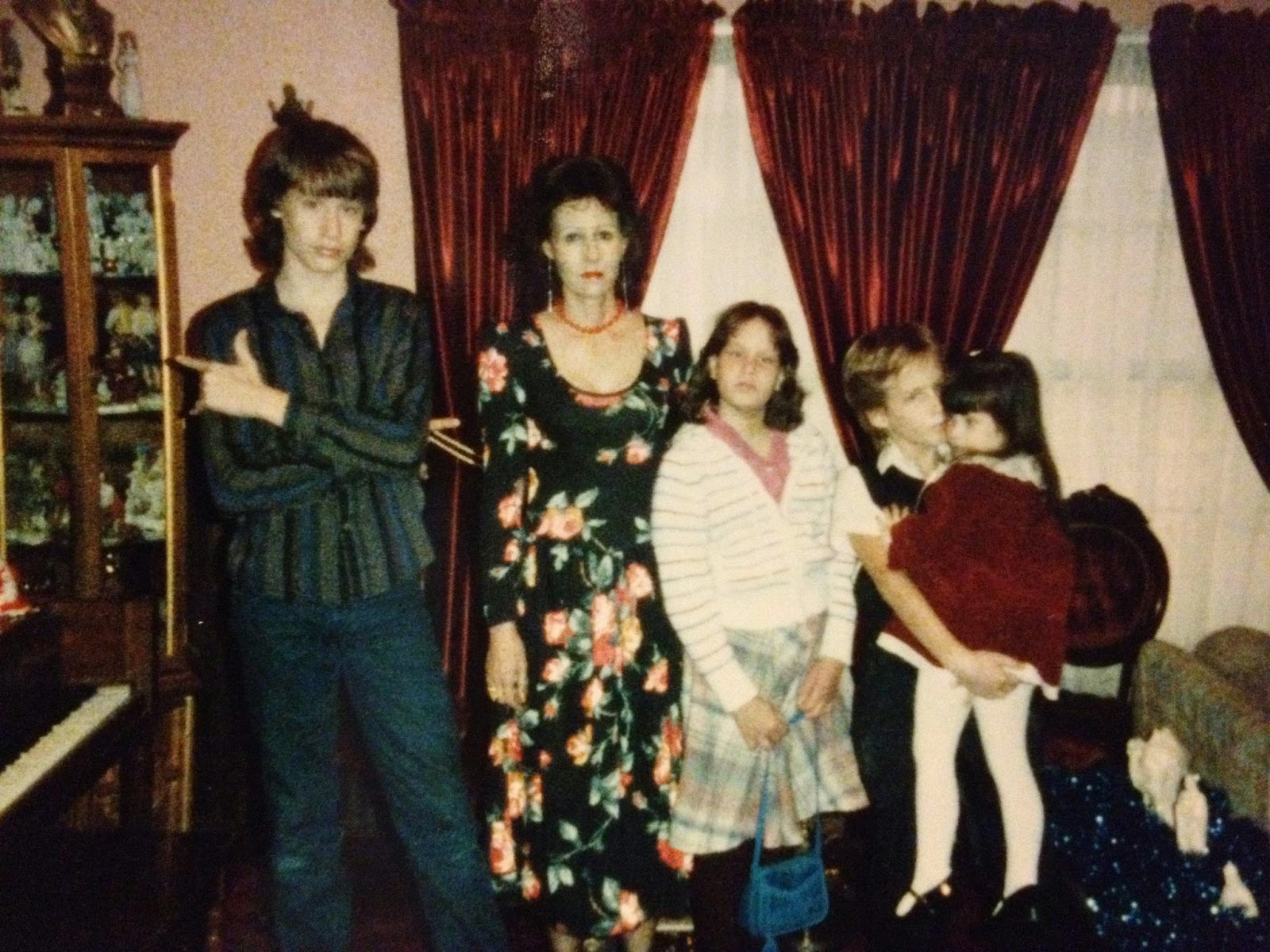 (We were a happy family… I promise!)

After her passing, I wrote a series of short stories. I tried to capture random moments that, when assembled, showcased her personality. As you can probably guess, religion was a big part of most stories – Catholicism was a gigantic, enormous, humongous influence on her life. As was Splenda, Jello, and spending time with us

The stories were about the first thing I ever wrote and, that Christmas, I gave them to some family members as presents. I never really thought about making them public.

Mom went through these phases where she’d get uber religious. For those who knew her, the first thing going through their heads is likely:

“Cody’s Mom? More religious? Isn’t that like saying Jesus could have been more devout?”

Yes it seemed impossible but, occasionally, her already OCD religiousness would up itself to a whole new level. For example, we used to get the Disney Channel every summer. It was our reward for another successful school year. We lived for The Mickey Mouse Club and Lady and the Tramp.

One of the greatest mysteries was what actually happened to spur Mom’s crusades. I pretend it was divine intervention. I picture her in her room praying when an angel appears saying, “Greetings my holy one. It has been decreed that abortion is indeed a great evil. Oh, and so is Chip n’ Dale Rescue Rangers.”

Looking back, I realize Mom was just looking out for us. It would have been much easier for her to blindly plant us in front of the TV and let that be it. She took it upon herself to monitor what we did and applied her morals to it, no matter how much inconvenience it may have caused her (or us). Of course, this rationale is hard to believe when you’re fourteen and forbidden to watch The Little Mermaid because Ariel’s seashell bra is too revealing.

Fast forward a year. One of Mom’s religious bugs hit again and this time, it affected our dad…in the most wonderful way…for us, not him.

On most weekdays, Dad would call Mom once or twice to check in. This is pretty standard in most families, but Mom always threw in her weird monkey wrench (momkey wrench?).  Although he called at the exact same time, she insisted on screening every single call. She was more afraid of her mom calling (who talked for days on end) than telemarketers. Because we were poor, we didn’t have caller ID, which meant Dad’s calls went through this process:

Our phone rang and, after exactly forty-seven thousand times, the answering machine kicked in. The cassette tape whirred a bit and played the message:

(rap)
We are the Wagner family and we’re not home.
But we will be back before too long.
So leave your name and number, and your address.
So there won’t be such a big mess.
Wait for the beep!
Wait for the beep!

The tape whirred a bit more, the beep sounded, and Dad spoke:

Mom would answer if she was available.

That was the standard routine until her new religious bug hit. I still remember that night because Mom locked herself away with Dad for a long time. I don’t know exactly what happened, but I insist it involved angels and beams of light.

The next day at 2:00PM, the phone rang like normal. Like normal, the answering machine clicked on, played our custom rap message, the tape whirred to the correct spot, and the beep sounded.

Instead of Dad’s incessant monotone, I heard a pause, kind of a “here we go” moment. I stared at the machine, curious, when he finally started talking:

Hi dear, it’s me. Hello? I guess you’re not around or busy. Anyway, I’ll let you go but I’ll call back in 5 Hail Marys.

I did a double-take, giggled, and found the replay button. About five thousand times. Each time, he still said “Hail Marys”. Each time, I laughed harder than the last.

Like the pioneers of old measuring an inch by the length of their knuckles, minutes were suddenly being measured in prayers. I’m guessing a Hail Mary is about thirty seconds, so five of them would be two and a half minutes. Sure enough, the phone rang a few minutes later.

No one knows why this started. My theory is Mom wanted everyone to make the most, prayer-wise, out of every moment. She herself prayed for souls in Purgatory nonstop. Instead of volunteering or reading to blind kids, she donated prayers. I often saw her wandering the house (or Wal Mart) with her eyes fixed on the ceiling. If Dad was going to wait idly by the phone, why shouldn’t he do the same thing?

This was how Dad left messages for several years (much to our amusement). And we would always get a glorious variety of responses. Sometimes he’d call back in four Hail Marys; sometimes ten. And you could always tell when his co-workers were around because Dad would suddenly call them HMs (“I’ll call back in six HMs”).

To this day, I wonder if Dad actually said his Hail Marys. My guess would be no. He probably used the time to eat some more peanut butter mixed with maple syrup or adjust the sparkle socks Mom bought him at garage sales. But who knows?

One thing I do know is that Mom would have jumped at any chance to say Hail Marys. I have visions of her calling random houses and saying the Hail Marys to strangers’ answering machines. Anything to spread the word.