Menu
Hi you!
Here’s a very dramatic update:
Writing
We are heading out of town for several days, then I’m heading to Dallas for almost a week. So we aren’t having a Writers’ Group meeting for a couple weeks. But I’m excited to start back up when I return.
Regarding my book, I’m finished with a bunch of research (although there will be tons more). I’ve been so focused on getting every detail right and having all research compiled perfectly, that I realized I haven’t necessarily been enjoying the writing. I am focused and feel I’m in tune with the characters, but that doesn’t necessarily mean I’m sitting here smiling as I write. And I think I need to! I think some of it is insecurity, meaning I may finish one paragraph that feels good but then assume the next one will be crap.
Singing
I completed my second week of singing! I was quite a bit more relaxed but I have a long way to go.
This week was kind of fun though. Let me explain: At Mass, I sing 3 songs – one at the beginning, one when the bread and wine are brought up, and one at the end. Well this week, the middle song was “How Great Thou Art.” I LOVE that song! It’s so pretty and the chorus has some sweeping high notes that are super fun to sing.
The other 2 songs, on the other hand, are basically awful. Actually, I shouldn’t say that. But I just wasn’t as into them.
Sooooo, I put all my focus into the one song and the outcome was entertaining. During the first song I held a note out wrong and got off during a verse. And while singing the last song, I never really hit a certain low note correctly.
But I ROCKED How Great Thou Art. I think my super uneven preparation was uber obvious to the congregation. In my head, I could picture them grimacing, then smiling, then frowning. Good times!
Enjoying the Area
I had kind of a funky day last Friday. I discuss it below, but the end result was I forced myself to take a hike by myself. That’s a pretty big deal! I hadn’t really gone anywhere by myself. And I made myself drive out and do a walk. After thinking for a bit I decided on the Hanging Gardens trail. I mention it in another post, but the effect this time was completely different.
Because it was a Friday morning in winter, the place was deserted almost the entire time. It felt like I had miles of desert all to myself. It was cool and, as I walked along the trail…
OK I’m going to side track a bit because I want to talk about the trail. It’s super weird! The trail isn’t a dirt path like you’d expect. Most of the hike is on rock (or super hard ground) so I guess they couldn’t carve a proper trail. Instead the entire way is marked with two rows of stones. Here’s a pic: 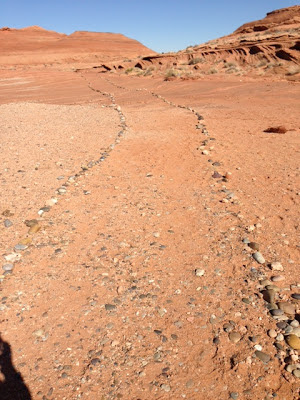 Seeing it, two questions immediately pop into mind (I guess one question for each row):

1.   Who actually had to build the trail? It would have consisted of walking around gathering “approved” rocks (ones that were an acceptable size and shape) and lining them up for hundreds of yards. Also, with tons of similar terrain, how did they decide what constituted the path? The whole thing seems very sketchy to me.
2.   What’s to stop some prankster (me, for instance) from moving the rocks to make a new trail? Can you imagine one that goes to the edge of a cliff? OH! Or better yet, one that just goes in a big circle? OK now the whole thing makes me wonder: What if someone had already done that? What if there are actual AMAZING gardens off to the left but the new “joke” trail leads you to the right (and the moldy water droppings)? That would actually be pretty awesome!
You know what, I was going to go into what I did on the walk, but it’s related to the story below. So I’m going to turn it over to me in Random Learnings and Stories. Take it away, me!
Random Learnings or Stories
Thanks me. As mentioned above, I had kind of a funky day last Friday. Let me rephrase that. I had a truly horrible day. It hit from out of nowhere and basically dissolved any desire I had to do anything. Actually, it was more than that. It like sucked the drive out of me and made me question everything I was doing. I know myself and assumed days like that would happen. But the force and suddenness really ran over me. I literally COULD NOT write. In fact, the thought of sitting down at my computer made me want to cry and throw up (not necessarily in that order). Part of me was questioning my talent/ability as a writer and screaming “You’re going to put months into this book and it will be unreadable. What a waste of time.” Another part of me was yelling “You’re a social person. Do you really want to be alone for a living?”
The end effect was debilitating and I just walked around the kitchen, lost in thought….
That’s when I decided to take a walk to the Hanging Gardens. And I’m so glad I did.
I’m not saying the hike made everything better and I returned home to finish the book (and win a Pulitzer). But, feeling like I had the world to myself, I did something I haven’t done in a long time: I talked to myself. Out loud. A lot. Yes, I was totally crazy, but it really helped.
I basically made myself admit that, no matter what, I have to create. I have to. But I also compromised with that other side of me: the social person. On the hike, I thought about all that stuff and let it all swirl around my brain. Well, in the middle of it, something hit me. I won’t say it was an epiphany, but it was something that seemed to give my goals some structure.
I basically decided that my idea of fulfillment is a box whose four corners are “writing, acting, singing, and helping.” I belong somewhere in that box, but I’m not exactly sure where. Yet. So I have to experiment with and practice those things until I find the right balance. It could be almost entirely in the writing corner with small amounts of the other three. It could be skewed to the singing/helping side with trace amounts of the others thrown in. Hell, it could be right in the middle, in which case I’d have to find a way to address them all.
The result is that I’m dedicating some time each day to all four. Currently, I’m giving myself about an hour for acting (monologue practice!), an hour for singing, and 4-6 hours for writing. The helping will be thrown in (singing in the church, running the Writers’ Group, etc…) and I want to look for volunteer opportunities.
The goal of this experiment is to gauge how I feel each week. I will make myself take mandatory hikes (that I’m actually looking forward to), talk to myself, and see how the balance feels. If I feel I’m missing one corner of the square more than another, I’ll adjust accordingly.
I really hope this could be an effective way to find that elusive balance I’ve been struggling to achieve for years and years. Hopefully, even after I have to bid farewell to this life and enter the working force, the box will continue to be my guide.
Wish me luck!