Menu
Hi you!
I literally JUST got back from a trip to Phoenix with Windy and Chris, so I didn’t get much (if any) work done. I knew it would be like a mini vacation so I just planned on eating out and goofing off. However, a couple days in, I actually felt like I needed to be more productive and the book often swirled in my head. That’s a good thing! I hope it will translate to some drive/work even when I’m on vacation. And I’ll be able to test it here in just a couple days because I leave for Dallas on Wednesday. So basically the 2 mini vacations add up to one regular vacation.
I’m looking forward to visiting Dallas but am going to try and eat a bit better. Holy crap I ate a bunch of… well… crap. But much of it tasted very holy. Like I was eating directly out of God’s hand! Yum!
Anyway, I think this post will be dedicated to the Phoenix trip. Enjoy!
Writing
Because of the trip, I didn’t get to write much. BUT I did try to observe lots of interesting people. Here were some of my favorites:
1.   There was a guy in Wal-Mart wearing tattered sweats and glasses secured around his head with a rubber band. At first, I felt really sorry for him (I admit we laughed when we first saw him… old habits are sooo hard to break). But then I noticed that he seemed very happy. He was practically bouncing to the greeter near the exit. I admit I would be really embarrassed looking like that in public…But he was quite content. I’m really trying to work on not caring what other people think about me, so I give him props. I hope that’s me some day! Except kind of not. Let me change that: I hope I embody that attitude some day!
2.   In an outdoor shopping center, a school of dancers was putting on a show for their parents (and anyone shoppers interested enough to watch). Little girls of different ages would get up, do a short routine, and then run off to make way for the next group. Wellll, it happened to be really cold that day but the girls still wore their skimpy little outfits on stage. This made it especially fun to watch the youngest kids. LOL!! OK that sounds pervy but it’s not at all what I meant!! What made it fun was the difference in their personas during and after the performance. During the dance, they’d all have those fake smiles glued to their little 5-year-old faces and they’d be flinging their arms around. The second the music stopped, every girl hugged herself for warmth and almost started crying before running off the stage. The sudden change was REALLY dramatic and funny. I can’t blame them, though, because I’d be doing the same thing. That’s why I don’t wear leotards and little jump suits in public.
3.   The owner of the dance school was an ASU cheerleader. How do I know? Because she made it a point to tell everyone during a speech (she actually told people to hush so she could talk). She also made it a point to “lead” some of the girls doing the ASU fight song. I put lead in quotes as it wasn’t so much leading the girls as it was completely overshadowing them to feel young and get another few minutes of fame. She stood directly in front of some girls and wore the LARGEST fake smile I’ve ever seen. It looked like her jaw and teeth were going to rip right off her face. Here’s a reasonable facsimile:

And she exaggerated every single motion. Arm raise? POW! Her shoulder socket pretty much tore off. Leg lift? WHAM! The force of her legs generated wind. I admit Windy and I were laughing really hard (partially out of shock). Oh, I almost forgot, she also had THE longest camel toe I’ve ever seen. It practically started at her belly button and went all the way down. OK I feel like I’m being nasty but it was a bit embarrassing watching her show up her kids. But the interesting thing was, the entire audience of parents cheered REALLY loudly for her when she finished. So they all must really like her. After seeing that reaction, I envisioned her being one of those hyper-positive people who never talks bad about others and tries to act as if things are perfect all the time. Even when her husband is cheating on her, she’s greets everyone with that gigantic fake smile. I actually like those positive people. I’ve faked happiness many times before and it can be hard (but it really helps). So I have to change my tune: If that’s really how she is, then a little showboating is OK.

Singing
I didn’t actually sing this week but did have some singing-related news. On Saturday, Windy and I went to a church in Scottsdale. The building was situated in a very nice neighborhood chock full of 2-story Spanish tiled homes. It was one of those “rich” churches. Therefore, I expected the choir/singer(s) to be like the angels themselves. Now I have to admit that, since I began singing, I’m sort of in competition with other church choirs. It’s such a terrible thing to say but, because I’m still kinda insecure, I find me comparing myself to every choir I hear.
The thing is, that choir was actually really bad. There was a woman who sounded flat through most of her songs, and a guy on the guitar who had his microphone turned so low, you couldn’t hear a word. Please don’t think I’m knocking the people there. I can admit that, just a few weeks ago, I would have hid my smiles and turned away from my sister (if we look at each other, we start laughing). But, this time, I felt something different: I experienced a tremendous amount of respect for the 2 singers. I’ve realized how nerve-wracking it really is putting yourself in front of a group of people (some of whom, myself included, will definitely judge you). Also, in a congregation that big, there are BOUND to be members who can tear it up, vocally. And they didn’t. Instead, 2 members who can barely carry a tune stepped up, put aside their fears, and tore it up in their own way.
OK I’m really not trying to sound preachy or “holier than thou”. Heck, I literally just finished talking about a woman’s camel toe. It’s just nice that a change in perspective can sometimes happen so fast!
Enjoying the Area
Instead of staying in a hotel, Windy’s boss offered her the use of a camper she owns. It’s one of those towable campers permanently parked on the north side of Phoenix in a little “camp ground” area. Now when I pictured camp grounds, I was thinking a place outside of town with crappy little overgrown parking spots (with 2 strips of dead grass from the tires). I pictured an ashy campfire right in front and lots of spiders. Well apparently there are nice camp grounds IN the city limits, and this was one of them. They had permanent electricity and water (VERY hot water!) and the area was very clean and nice.
In the end, instead of “camp grounds”, I classified the place as a “retirement home”. Every single person there was over 60 (and we saw quite a few people). They’d just kind of mosey around, sometimes walking their dogs right in the middle of the road. One guy had his dog on a leash that stretched all the way across the street. As we drove up, it looked like we were crossing the finish line at a marathon. The guy didn’t seem to want to rein in his dog, though, and even gave us a dirty look as we passed. I’ve posted a picture for your enjoyment: 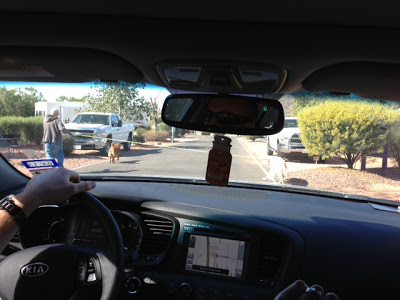 The camper itself was pretty cool and had 3 beds, shower, kitchen, living room, and all that fun stuff. Being inside was like living out in the middle of nowhere. So I’m kind of considering it my first camping trip…. Even though an average day of “camping” was going to American Eagle and buying jeans.
Random Learnings or Stories
A lot of stuff happened in Phoenix, but nothing specific is really jumping out at me. Actually, you know what it is? I’m too tired to write anything else. It’s 1:00AM after getting home from a 4-hour drive. So it’s night time!