I finished the first draft of the book today! I was writing approximately a million words a day and actually finished ahead of schedule.

I mentioned last week I wasn’t sure if I’d like the first draft of this book. And I’ve realized why:

It’s hard to say without giving details away but, essentially, this book could have been one of two different genres. Ultimately, I tried mixing them, but I’m not sure if it works. And the book might veer far more in the direction of one genre than the other if there is a sequel (which I believe there will be). I’m honestly not sure what that will do to the readers.

I got my new microphone yesterday! I tested it and it seems to work OK. MIRACLE! That means I’m ready to get this show on the road. Tomorrow, I’ll be going back through the scripts I wrote and will probably do a couple run-thrus. Then I have to setup times with the “talent.” We are going to have kind of a shooting party. It should be fun! Then I have to start wrangling up some cats for the next video.

A few weeks ago, I mentioned that I might help direct a musical. At this point, it looks like it’s going to happen.

More importantly, I was talking with the woman in charge and suggested doing Beauty and the Beast, and she loved the idea!

That makes me so excited. BATB (that’s how us snobs say it) is my all-time favorite Disney cartoon. OK I’m going to sound like the biggest dork but, during a summer in high school, I watched it almost every night. At one point I had it memorized.

Ahem…I can’t believe I just said that. Is there an eraser handy? No?

Anyway, it sounds like there’s a good chance I’ll be directing Beauty and the Beast in the near future!

It’s going to be really interesting.

As I mentioned, a lot of the cast will be Windy’s clients – people of various ages with mental disabilities. They love being on stage and performing. As do I!

Because of the varying degrees of cognitive disabilities, I’ll have to edit down the play to about an hour. That’s going to be really tough. I mean, how do you edit perfection?

But I’ll give it a shot and see what we end up with. When it’s all said and done, if everyone has a great time, it doesn’t really matter what’s cut and what remains.

As long as I get to sing “Bon Jour!” a hundred times!

This past Sunday, Windy, Chris and I went to the local park and threw the football around. It was the first weekend of fall and, ironically, the first cooler day in town. (I actually hate that. I need more summer! I love my heat! I’m the freak who loved going outside all day in the Dallas summer!)

Ahem.. Anyway, the weather was bright and clear with just the tiniest nip in the air… Meaning that after we warmed up, shorts and a t-shirt were fine.

I haven’t thrown the football in years but it’s really fun. Don’t get me wrong, I’m terrible at it. But I look pretty professional and amazing: 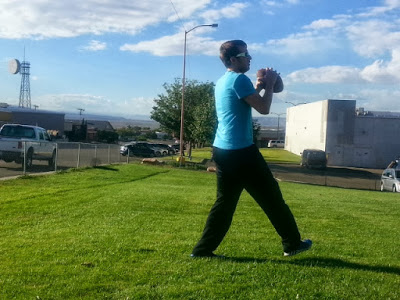 Windy sprained her ankle the weekend before (she fell into a hole), so she just sat in a chair and watched.

After about an hour, though, she decided she really wanted to play with us. So we ended up giving her the ball and she threw to us from her portable canvas chair. I’m sure it looked really amazing. And she can’t really throw (sorry Windy!) so we couldn’t run more than five or ten feet away from her.

But that didn’t stop us from playing a real game! Windy was the quarterback and Chris and I took turns being on her team. We’d run secret plays and our goal was to simply catch the ball without the defender interfering. It was really crazy and fun because Windy could only sit there and throw five feet.

Naturally, our plays got crazier and crazier. At one point, I had Windy throw the football in one direction (the decoy!), then throw a stuffed animal she brought to me. Packer Pig (her stuffed Green Bay Packers pig) became the real ball!

On another play, Chris ran at me like he was going to molest me. I got scared and ran away so he sprinted to Windy and she threw him the ball.

All in all, it was really fun.

It’s so random the things that can interrupt writing and the creative process.

Today, I was really in the zone. I was finishing the last chapter of the second book and, emotionally, I was totally in the right place. The first thousand words were on the page in less than an hour.

After an hour, it was still at it. OMG it was driving me crazy. It was like my own personal version of the Tell Tale Heart. By that time, I became obsessed with the fly and fell out of my zone.

Finally, it rested on my mouse and walked around for a bit. I watched, making sure it was all nice and comfy. When it gave me a thumbs up, I reached back and grabbed a big manila folder from Chris’s desk. I slowly spun around and the fly was still there. I lifted the envelope and…

…A wrench flew out of the folder, almost broke my mouse, and crashed into my laptop! And it actually pressed the perfect key sequence to mess with my mouse. I don’t even know the hot keys to make my mouse scroll painfully slow. But somehow the wrench found them.

Seriously, who keeps a wrench in a folder?

Then I looked around and noticed we don’t have any bug spray. So I grabbed a can of orange Lysol.

A few minutes later, the fly landed on my right hand and I hosed it down! My hand was all sticky and I got the fly, but it still didn’t die (I supposed it was very clean and disinfected though).

When it was all said and done, it took me about 4 hours to write 3,000 words. The fly seriously cut an hour of my time away. Wow, that sounds so dramatic. But, I guess the point is, the creative brain is fragile. Any little fly or nuclear bomb can ruin it.

OK I posted this section with really good intentions to write some short stories. But, alas, I don’t have one again. Tell you what, if I don’t have one ready next week, I’ll post one of my old stories (that will suck).