I’m currently pretty deep into the fourth draft. I actually made a LOT more notes on the third draft than I expected 🙁 I hope that means I’m learning a lot and catching even more mistakes. Either that or I’ll unfairly critique my book until the end of time. THE END OF TIME!!!

After much thought, I decided to go ahead and rewrite the second chapter. I’ve never liked it: it’s from a different POV than the entire rest of the book. When I first wrote it, I thought it was unique and interesting. But now it feels like a random dog turd thrown into a flowery bush.

How’s that for an image?

I haven’t touched the new book in a week. At this point, I’m giving it some space so that, when I go back and read, it will be somewhat fresher.

That’s what a lot of writers suggest and I found it worked well with the first book.

I’m a loser and haven’t done anything with the video. I’ve been so focused on getting through the first book, that everything else has been pushed to the back burner.

This past Saturday, when I pulled into church, a HUGE tour bus was parked outside. It was one of those gigantic buses that holds like eight million people. At first, I was like, “Oh dang!” and got nervous. But then I realized that, if they were all attending Mass, it was my chance to sing in front of even more people.

When I walked in, the church was definitely more crowded. But every tourist was at least seven hundred and thirty-two years old. I guess it was some sort of senior citizen bus. And the seniors do NOT miss their weekly Mass.

It was actually kind of fun watching them walk around and look at the church. One woman went to the front and tried to light a candle, but couldn’t figure out how to do it. Finally, a local member went up and pulled out the lighter for her. But the old lady couldn’t get it to work, no matter how hard she tried. After a few minutes, her husband walked up from the back with another lighter in his hand that was already lit. She didn’t take it at first, because she looked intent on doing it herself.

I imagined him being the type of husband who always thinks he’s right. And she didn’t want to give him the satisfaction of having the ‘correct’ lighter, so she slaved over hers forever. Only when she couldn’t even make a spark, did she grab his and stick it into the candle.

OK that doesn’t really have anything to do with singing, but it was entertaining. No? Oh, I guess you had to be there.

Windy and I have been bugging Chris for a while to bring us on a water patrol. He works for Game and Fish and occasionally patrols the lake, checking for fishing licenses, boat registrations, and whatnot.

This Sunday, he finally invited us to go out with him. Only we weren’t going out to Lake Powell. No, he wanted to take us to Lee’s Ferry, which is a launch ramp downstream from the lake. It’s actually where people go to take river trips thru the Grand Canyon.

So we actual went to patrol up and down the Colorado River.

I’ve actually seen the river from above, looking down from the cliffs at Horseshoe Bend: 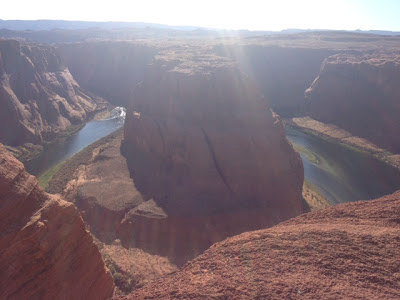 But I’ve never been on the river looking up, and I was super excited. Also, because Chris was actually working, we’d get to see him rough people up!

Fortunately, the weather was beautiful. It has been so flaky here, I half-expected thunderstorms or tornadoes or asteroids. But the day was clear and fairly warm. It was the type of weather where it’s chilly in the shade but hot in the sun.

After loading up, we drove to Lee’s Ferry, which is about 16 river miles south of the Glen Canyon dam (which forms Lake Powell). Then we got the boat ready and tied it to the dock before setting out: 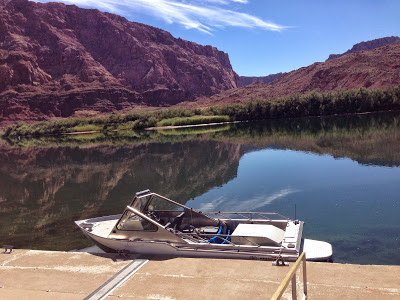 You’ll notice the boat is pretty inconspicuous. Apparently, they like having some unmarked boats (just like cars). That way, people without fishing licenses don’t have time to throw their rods in the water or something.

Although it looked plain, the boat was kind of cool. Because the river can be shallow in parts, the boat was fitted with an engine like a jet ski rather than a propeller.

Here were the interesting moments once we got going:

1. First off, the river itself was beautiful. At some spots, the cliffs around us rose up hundreds of feet (like when we navigated around Horseshoe Bend). Here are a few pictures I took along the way – 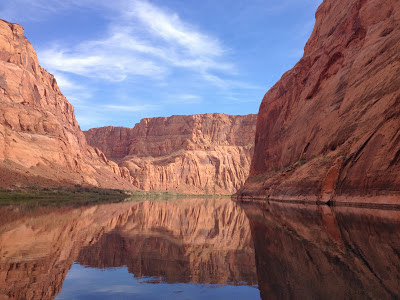 2. Watching Chris ‘on duty’ was pretty fun. He definitely has a police voice, which is deeper and much more commanding than his regular voice. I’m not saying his regular voice is girly, but when he calls, I usually think it’s Windy…

3. When Chris ‘pulled someone over,’ I got to help. He would circle the other boat and pull alongside them. My job was to grab the other boat when we were close (so we didn’t ram them) and then hold on while Chris talked to people. When he was done, I’d push away and we’d take off. One interesting thing to note: the Colorado River has a definite current. So we’d drift with the other boat downstream while Chris did his business. At one point, we almost made it back to Lee’s Ferry, where we launched. There were also eddies (small whirlpools) in random places that we had to be careful for.

4. Some people were fishing from the shore. To talk with them, we had to ‘park’ the boat (I don’t think that’s the right word). Because of the random spots fisherman would be standing on, it wasn’t always possible to ride up onto a sandy beach. In those circumstances, we actually had to get out, pull the boat up as far as we could, and hold it in place. The problem was, the river was about 55 degrees (because the water flows in from the bottom of the dam, it’s much colder). I touched it and, believe me, it was freezing. To help out, Chris gave me a pair of waders. They were like big rubber pants: 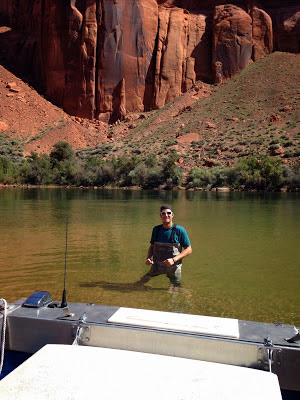 5. We actually made it all the way to the dam then stopped to take some pictures. From the bottom, it looked SOOO much smaller than it actually was: 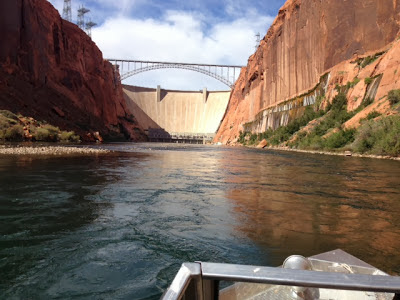 I’m thinking of making some changes to the blog. Most significantly, I’d like to contribute shorter articles more often.

Therefore, I’m thinking of creating separate categories for ‘Writing’, ‘Singing’, ‘Sightseeing’, ‘Random Insights’, and ‘Short Stories.’ Then I can write a piece for the appropriate category as events occur or progress is made. That way, I’ll be adding smaller pieces several times a week.

I think that change will be good because frequency can be better. Additionally, you won’t have to scroll through a gigantic blog post every week. That’s especially relevant if you’re only interested in one or two categories.

I’m going to try to make this change over the next couple weeks and I’d love to hear peoples’ feedback.

OK here’s a little excerpt I wrote about a guy dealing with what he considers a current problem (at least around here). It only took me about an hour, so ignore any grammatical issues. I wrote it awhile back and was going to do some editing, but I figured I’d share it with you, as-is:

Dammit, why did I open the door to the Mormons? I usually keep my house locked and hide behind the dark curtains. The thing is, I thought it was the cupcake lady and really wanted my red velvets. So, without peeping through the peephole (that makes everyone look like fish-eye dog posters), I threw open the door holding a twenty dollar bill. Bad idea.

It’s not that I hate Mormons. I watched that episode of South Park. I read about them on Wikipedia: they prefer to be call Later Date Saints, or The LDS. So believe me when I say, I know all about the Mormons. And I accept all that Jason Smith stuff.

I just wanted to sit alone and eat my cupcakes.

I guess I could have turned them away. I could have said “No thanks, I’m already full on Jesus.” But I don’t like confrontation. Some of it comes from my father, handed down on a frilly genetic plate. The rest came from out there (I’m waving my hand out the window right now). Thieves sue the people they rob. Murderers sue the people they kill. Who’s to say these Mormons wouldn’t file a lawsuit if I slammed the door in their faces (maybe the sound of the door or the feelings of neglect would have caused emotional trauma)? No, I couldn’t risk it.

Once they were inside, I only I pretended to listen to crap about the Mormon Bible. Instead, I was busy coming up with escape scenarios. First, I thought about standing up, running into the back yard, leaping my vegetable garden, and climbing the fence. But what would they have done if left to their own devices in MY house? It’s nothing against the Mormons. If someone abandoned me, I’d probably rummage around a bit, maybe eat some cookies or take a TV. Also, what kind of lawsuit would they have filed if someone got injured while I wasn’t even there?

So I moved on to plan B. It involved faking a seizure, but I wasn’t sure I’d be comfortable getting mouth to mouth from a stranger. Although the shorter one was kind of cute. Maybe I should have done that anyway.

Before I could start shaking and pretending to swallow my tongue (I tried plumping it up for the CPR), it hit me. The perfect excuse! I sat there and kicked myself (which was difficult). All I had to do was tell them that I was already Mormon. Then I could have encouraged them to spread the word to those who needed it. Not me, no sir!

I thought about saying it right then and there but, silly me already told them I was Catholic. I guess I could have said I misunderstood the question (“Oh! I thought you asked what religion lets you drink!”).

In the end, I signed up to be a Mormon. They left full of smiles and gratitude so I guess it felt kind of nice. But what am I supposed to wear to a Mormon Mass? Or is it a service? Or a session? I’d better go Google it before I embarrass myself.