The fourth draft of the book is done! I anticipate one more draft before the book is in a state for proofreading. It’s so close!!

Also, I’ve been thinking about it, and I decided I’m going to finish the fifth draft of the first two chapters then submit them to agents.

So I will officially be submitting my book to agents within the month!

The idea makes me super excited but nervous, because I have to, HAVE TO, HAVE TO put my best foot forward. This means the query letter has to be as polished as possible, the synopsis needs to be succinct yet engaging, and the opening pages have to grab your attention.

As mentioned several weeks ago, I put together a spreadsheet of potential agents and gave them grades based on their criteria. I’m considering submitting to the “middle of the pack” agents first rather than to my favorites. My rationale is that, if there’s a glaring flaw and I submit to my favorite agent, it will be rejected. By submitting to the middle agents, maybe any flaws will be uncovered before moving on. Does this make sense?

Now that the fourth draft of the first book is done, I’ve put it aside for just a few days and am starting to mark-up the first draft of my new book. Reading through it, I can really see the progress I’ve made as a writer. When reading the first book, I wanted to throw up (often) because the sentences were overly formal or cheesy or nonsensical.

This book is much better. Sure there are things that bother me. And there’s a lot of unnecessary redundancy. But I can get through pages of the book without that nauseous feeling, LOL.

The one kicker about this book is a primary plot line. I’m trying to think of how to integrate something into the story (or if I even need it). If I leave everything as-is, this book will be done relatively quickly. If I decide to integrate that piece, I’ll basically have to rewrite a huge section of the book.

Fall Festival is over so the video is now being pushed to the front burner. YEAH!

Because of my trip to Dallas, I haven’t had a chance to sing over the last week. But I’ll be hitting the church again this weekend and will have more updates then.

The area I enjoyed over the past week was Dallas. I went back to spend Halloween with old friends and basically just catch up.

With that said, here are some memorable moments from the trip:

1. OK just to get this one out of the way: On Friday, an awesome friend and I went shopping at one of the million malls in Dallas. I’ve lost so much weight that I needed to pick up a few long sleeve winter shirts that actually fit. Anyway, we ended up going to Hollister and, in the back, were a section of cardigans on clearance. They were really cool so I was stoked to get one super cheap. Grinning, I flipped through the selection and found two I really liked – one with snowflake patterns and the other plain. Now, being the indecisive person I am, I literally tried them on over and over and over. After like a half hour, I still couldn’t decide which one to get. Frustrated, I finally walked to the cashier, held them up, and said, “Which one of these do you like best?” The employee looked over her glasses at them and immediately said, “Neither. Those are womens’.” WHOOPSIES!

2. On Halloween, we took my godson trick-or-treating to the most amazing neighborhood in the metroplex. Seriously, it was awesome! We ended up stumbling across it a few years ago and were so impressed, we had to go back. This neighborhood takes Halloween SERIOUSLY. The decorations are amazing: 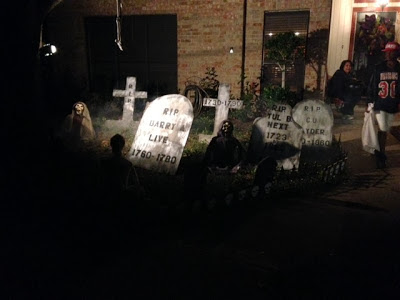 One house even projected Halloween movies on their wall: 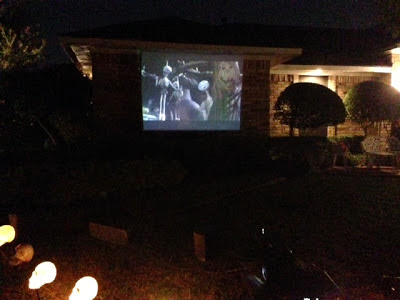 Other houses actually set up small haunted houses in their yards. It is seriously cool. And their hard work has paid off. This year, there was no parking for blocks and blocks. Once we found a spot, we had to compete with hundreds of other kids filling the streets for candy. It was crazy.

OK I was going to tell you where it’s at in case you’re curious. But now I can’t remember, LOL. I’m terrible with directions.

3. Thursday, before we went trick-or-treating, we went to an Xbox One pre-launch party. I’m not so much into console games, but it was really cool. Instead of having a single station with a couple games, the entire event was centered around playing the new games. Stations were setup everywhere with tons of games and, if you played them all, you were entered in a drawing to win an Xbox One when it’s released. After rummaging through the games, I decided my favorite was Skylanders. If you haven’t seen it, you essentially buy toys that you can set on a special pod. When you do, you get that character in the game. The business model is GENIUS. Not only do you buy the game, but you have to buy the toys too. It can cost a fortune but it’s super fun. I wouldn’t leave the game and I think the employees got mad at me:

The question I’ve been asked most over the last week is “Do you miss Dallas?”

You know, it’s actually a really tough question to answer.

Being back in Dallas was nice. I got to see my friends and, although I was worried it might feel weird, things didn’t seem different at all. It was like I’d only been gone the weekend and we slipped right back into old jokes and routines.

Admittedly, I cut the trip short just in case it got weird (and I didn’t want to wear out my welcome). It was the wrong decision; I should have just trusted that everything would be fine. Because of the shortened trip, I didn’t get to see everyone I wanted to. Oh well, hindsight is 20/20.

Anyway, it was also nice being back in a big city. I got to eat at my favorite restaurants and actually buy some clothes. More importantly, I was reminded of the opportunities there. They have writing conventions and seminars for indie authors and several universities. Those things are sorely lacking here and will be important for my future.

On the flipside, the traffic in Dallas was unreal. At one point, it took us over an hour and a half to get from downtown to north Plano. It was absolutely CRAY CRAY (yes I just said that).

Also, I was reminded of the infinite distractions in Dallas. Everything about writing and blogging and singing flew out the window in lieu of events and eating and shopping and exploring. That’s something I suffered when I lived there: I’m so easily distracted.

Finally, I think the thing that influences my answer most is work. Just the fact that I’m working for myself gives an edge to where I’m at now. It’s just so incredibly liberating and I’d love to do it forever; I’m definitely one of those people who can keep myself busy. Unfortunately, it’s very likely not possible so, in the near future, I’ll have to find something that I like that will let me pay the bills.

Where’s that, you might ask? I have no idea. WHEEEE!

I’ll have a story next week 🙂