Last Thursday, Windy and I packed up the car and drove to my hometown for the weekend. For those of you who don’t know, I’m from a little town in the Texas Panhandle called Pampa. With a population of about 17,000 and no surrounding communities, it’s a stand-alone little hole in the wall. It’s also very country; you see more sets of wranglers and cowboy boots in Pampa than you do fake boobies in Dallas. Still, the people there are really friendly. You can’t even go into a convenience store without being chatted up.

Why were we going? My brother, Blue, was testing for his black belt in Kenpo. Apparently, it’s a big deal; he’s been training for four years. We didn’t know exactly what it meant, but went to support him during his final test.

Instead of diving into the whole story, I figured I’d be Internet-friendly and break things out into my patented list of memorable moments.

1. The Kenpo test was brutal. From what I understood, the test was supposed to be difficult, but manageable. It was going to consist of a few rounds of sparring, followed by a physical test (pushups and the like). Now, while that sounds hard, Blue was completely ready for it.

The day of they test, they changed everything.

Instead of the physical portion, they had him spar against different members for over an hour. While a couple of these members were lower in rank than Blue, three of them were black belts. One of the guys was a 4th degree black belt from Denver. He was amazing, so calm and smooth.

Watching the test was absolutely brutal. Fighting against black belt after black belt exhausted him to the point of passing out. Halfway through, he could barely focus… and he still had more rounds to go. I recorded some of the sparring on video and you can hear me freaking out the whole time.

Despite the difficulty of the test, Blue passed and received his black belt. Because of how hard it was, I was sooooooo happy for him.

Check out the pics and their captions to learn more: 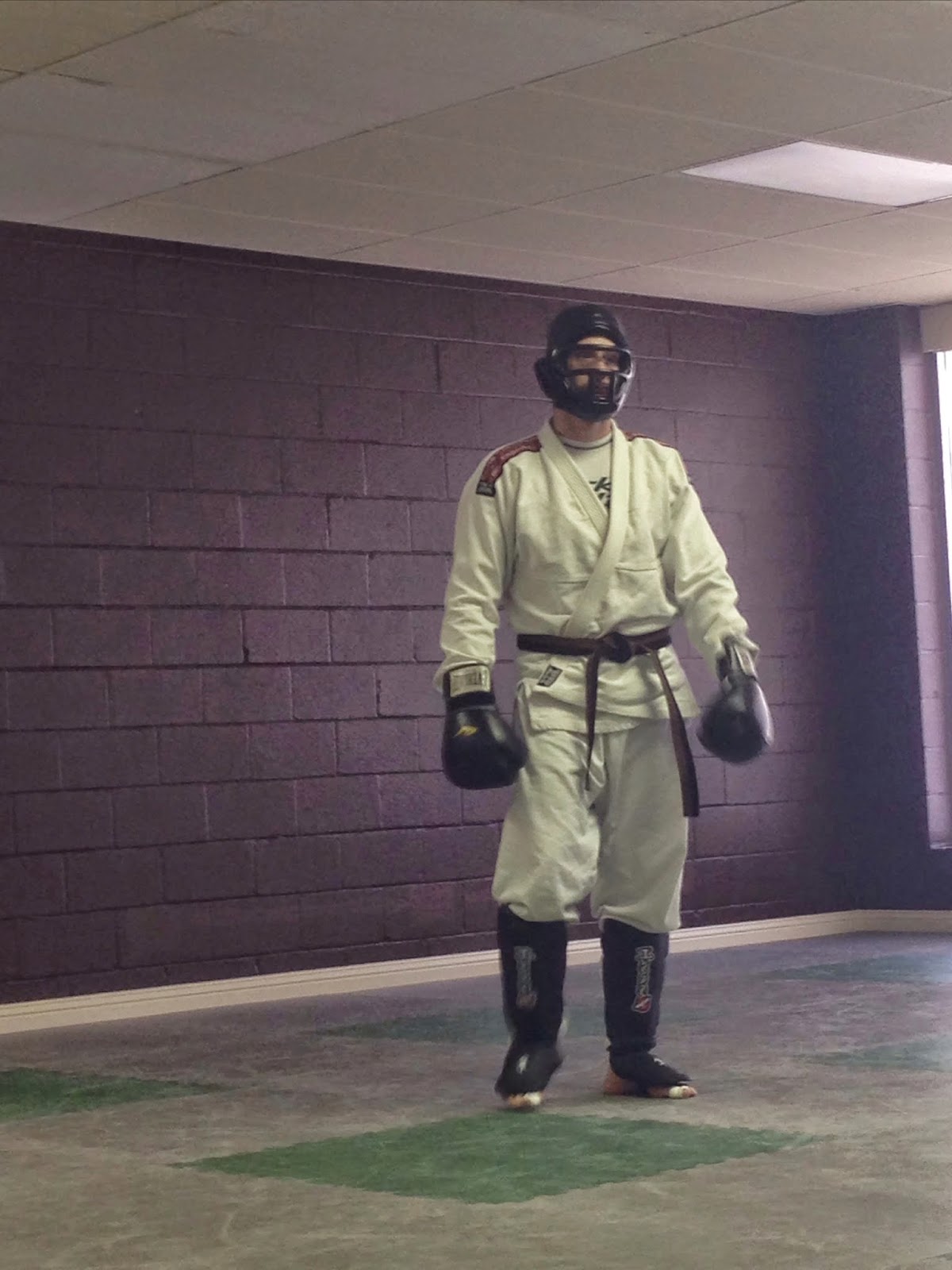 Before the groundwork (where they basically wrestle on the floor), Blue had to do a stand-up sparring exercise. It consisted of punches and kicks so the combatants wore protective gear. Because of that, they went all out, kicking and attacking each other. Actually, let me rephrase that. They said Blue wasn’t allowed to attack. He could only defend. Again, they didn’t make it easy on him at all. 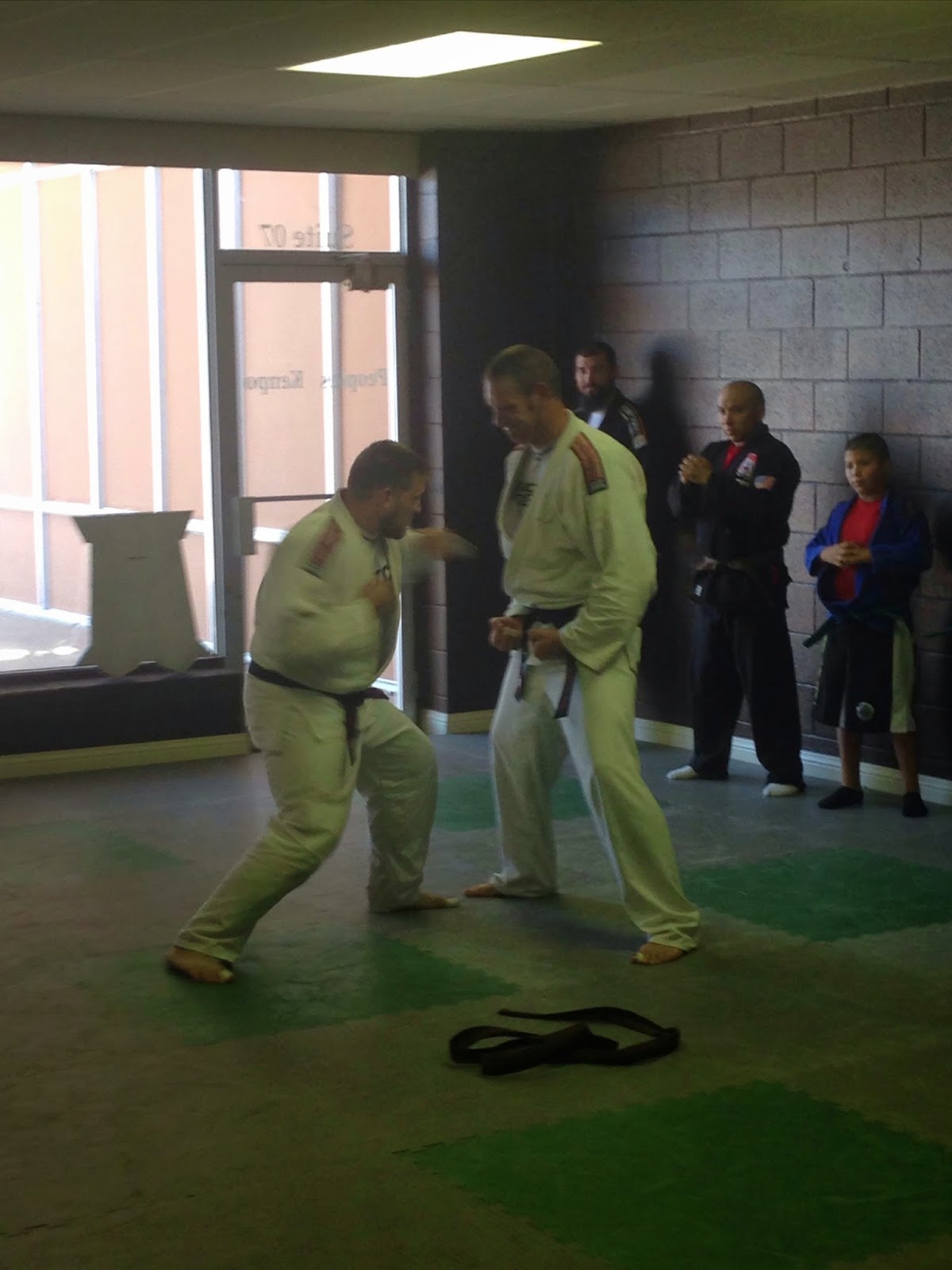 In addition to the sparring, Blue also had to take gut punches from each of the black belts present. I’m serious. They each reared back and punched him. The guy in the picture punched him so hard, Blue flew back a few steps. Again, it was brutal. 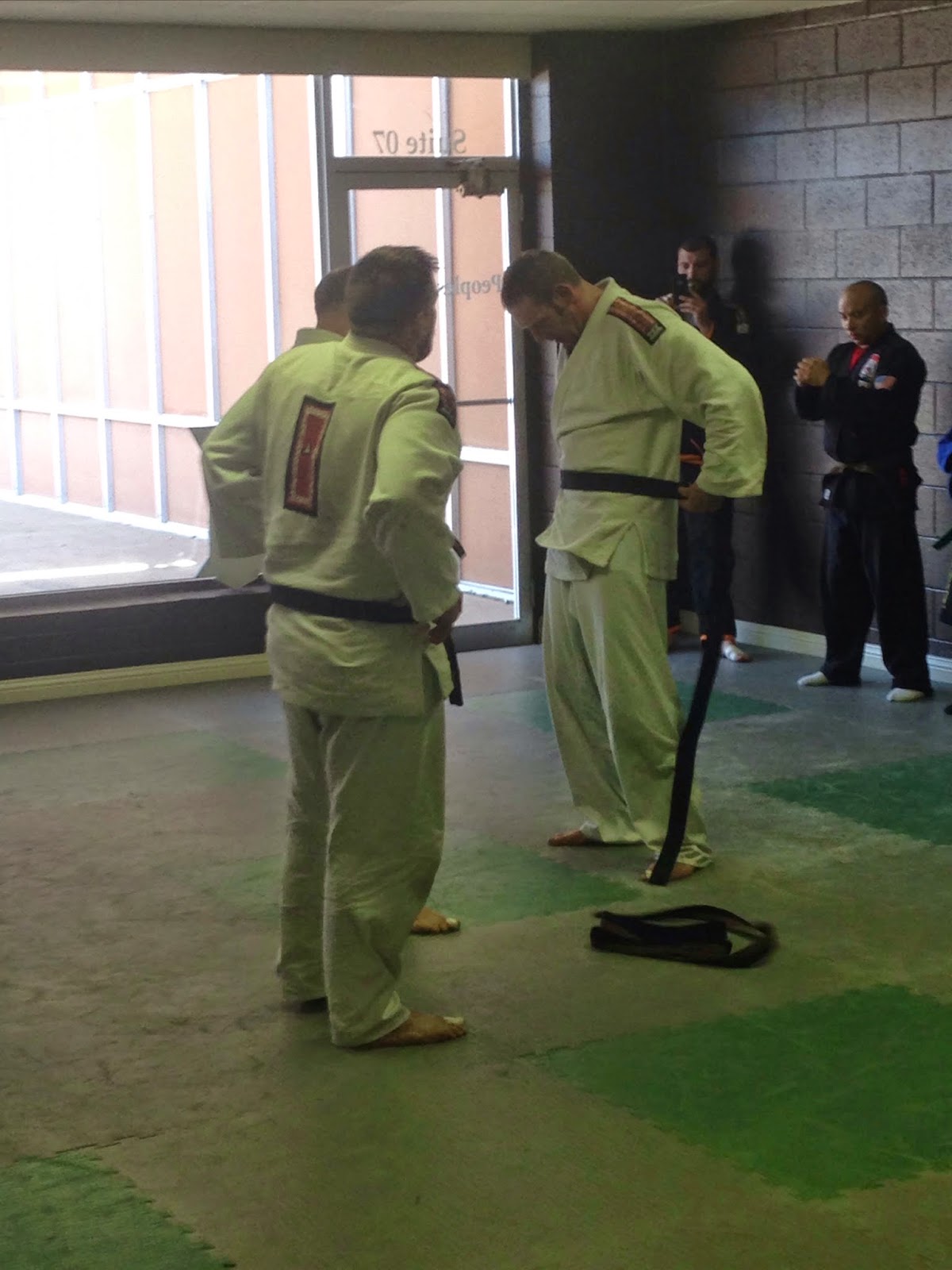 Watching Blue put on his well-deserved black belt was amazing. He’s actually decided to keep going. In a couple years, he might earn his first degree black belt.
2. Yeah, so I don’t know the names of the Kenpo moves… Therefore,I gave them titles based on what they looked like to me. Over the course of the weekend, I witnessed “The Hug”, “Spooning”, “Goosing”, and “The Missionary Position”, just to name a few.

3. Businesses in Pampa make me sad. I don’t know what it is about restaurant owners in Pampa thinking that, while the previous 17 businesses in a certain location failed, theirs will succeed.

Back when I lived there, a new locally owned restaurant would open every month or two. Inevitably, you’d see the “going out of business” sign appear in the window within a year. That trend still holds today. And it’s not just restaurants. The Pampa Mall re-opened recently. When I heard the news, I was so excited. It made me think the town was really rebounding. It also brought back some nice nostalgic memories. When I was little, the town was booming and we hung out at the mall almost every day. I spent about 4 life savings playing Dragon’s Lair at the arcade.

Consequently, I was really excited to run by the mall and check it out. All I gotta say is:

:==(
(This is my crying with disappointment face)

While the mall is indeed open, there are only three stores inside that are actually in business. This was a pic taken during the middle of a Sunday afternoon: 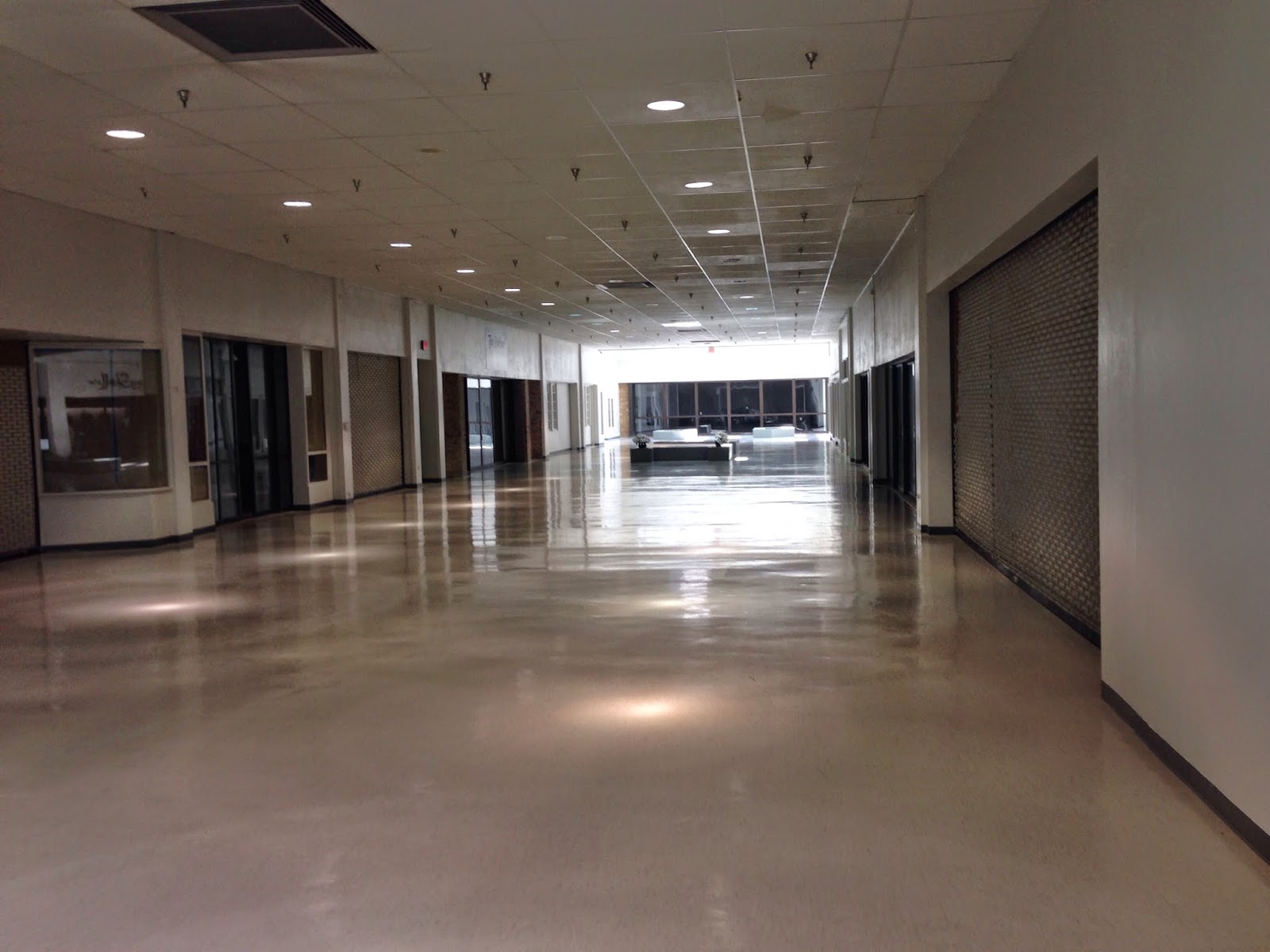 Of the three stores, one had signs in the window advertising the sale of their equipment…so they’re going out of business. It’s only a matter of time before the others go under too. It makes me sad. Pampa is a nice little town that deserves better.

4. Amazing stuff is super cheap! It’s a product of the poor economy, but stuff in Pampa is so economical! After scouring the town, we found our favorite snow cone place was still open. First off, I was thrilled they hadn’t gone under. We have been going to West Texas Snow Co. since I was a lifeguard in college. They have THE BEST snow cone I’ve ever had: the chocolate snow shake! It’s a standard snow cone with chocolate flavoring, except they blend it with cream, turning it into a little slice of Jesus.

Anyway, I ordered the large snow cone (it was huge). The thing was $2.50. To put it in perspective, small snow cones in Phoenix are $4 and they’re served in a shot glass…

I may have done a double-take then danced a little jig around the little building. And we may have gone back three times for chocolate snow shakes. 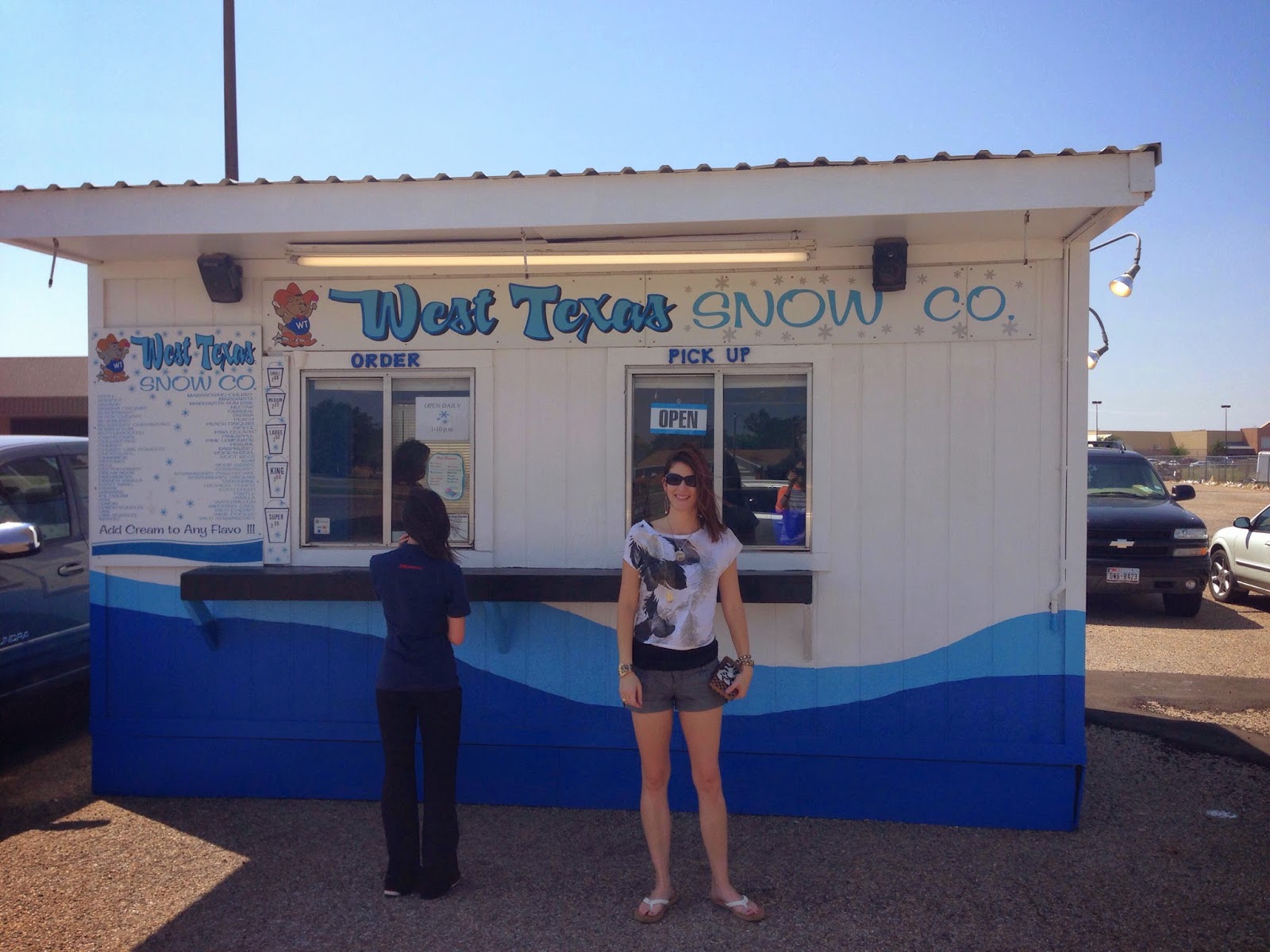