This past Sunday, I went to my first open mic. I’m not sure what you think of when you hear “open mic”. The first things that come to my mind are singers and comedians trying to get their first big break.

This open mic was neither – it was for writers. Anyone who’s written something was welcome to share 8 minutes of genius babies with the world.

OK first off, I was really excited. Not because I was performing. As it was my first time, I decided to remain a spectator. No, I was excited because I’m a really experiential person. Admittedly, images of Mike Myers saying, “Woman. Whoa Man. Whoooaaaaaa Maaaaaan,” flew through my head. Awesome. 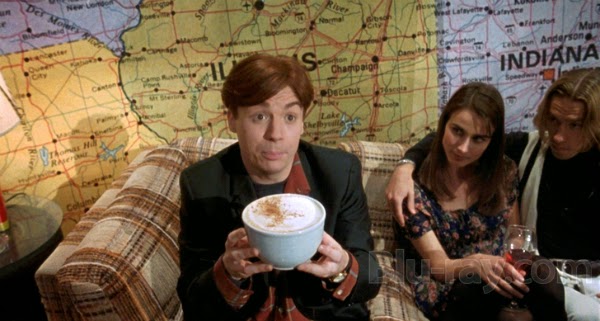 To be honest, though, I wasn’t sure what to expect. I wasn’t even sure if we were suppose to clap or snap our fingers when people finished.

The first thing that caught me off guard was the venue. It wasn’t at a hole-in-the-wall coffee shop or off-off-off-off Broadway theater. I imagined a dive bar filled with smoke. What I got, though, was a respectable theater. It was a standard “black box” affair with a black stage, black floor, and black chairs.

Once we were seated, the host made some announcements, and the festivities began. One by one, an author got up, went to the lone microphone at the front, and read a selection. Through the course of the afternoon, I heard short stories, poems, essays, etc…

I don’t want to bore you with every detail, so I figured I’d share the most memorable moments:

1. The Not Racist Racist

Oh man, I can’t even write this one without cringing. When we first arrived, the only other person present was a man in his seventies, immersed in a book of poetry. No biggie.

A few minutes later, an Indian family came in together. I recognized a woman from one of my writers groups and nodded at her. Right then, the old man lowered his book, so I figured he knew her as well. He opened his mouth to speak and this is what came out:

“Oh great! Are you belly dancing?”

The woman glared at him, put a hand on her hip and said, “No. That’s another part of India.” Without another word, she went to her family.

Apparently sensing his faux pas, the man leaned forward in his chair. “Actually, I have a friend who lives in Iran.”

I gasped and covered my face with my hands. It was like a horror movie. I actually peeked through my fingers to witness the bloodbath.

The man proceeded to talk about his Iranian friend, completely oblivious to the woman’s derision, which grew until she blatantly turned her back to him.

Fast forward an hour. It was the man’s turn to read. He walked to the front and announced a poem he’d written. He opened to the proper page and launched into it. I kid you not, this was a line to his poem:

We will only experience happiness when we learn to ignore the color of one’s skin.

I about died. I seriously did that thing where a laugh tried to escape and I had to cover my mouth to stop it.

2. The Power of The Woman

You know how lots of TV shows and movies depict angry women taking the mic and speaking about the “power of the woman”? I got to see it live! A woman got up and said, “I’m reading today about the essence of the woman. It’s my perspective as a woman in the 1970s versus today.”

At that, she cleared her throat while I scooted to the edge of my seat.

She was amazing, emoting all over the stage and releasing her “essence”. I was exhausted when she finished!

An unassuming man got up to the mic near the end. He introduced himself and told us how he came here from Africa 10 years ago. He said he grew up there amidst scores of violence. As a child, he witnessed deaths of his friends and family. The only reason he is alive is because he managed to come here.

After telling us this story, he read a poem about the atrocities he encountered, like bodies in the streets, decomposing. The poem lasted about five minutes, and he had memorized every single word. It. Was. Incredible. He could have won an Oscar for his performance. When he finished, everyone sat stunned in their seats. Awesome.

Just so I tie up all loose ends, I figured I’d tell you about the Indian family (I just realized this blog post is a big melting pot. Go ‘Merica!).

It turns out they were the “halftime show”, set to play a couple of songs for everyone.

The group consisted of four people – father, mother, son, daughter. The son played a keyboard while the daughter sang. Standard stuff. The father played an Indian drum that was really cool. Part of the skin was covered in a paste which, when struck, made a different tone. Therefore, he could play the one drum and get different tonalities from it, depending on where he beat. The mother played what looked like a guitar with a tumor. It had this big gourd thing sticking out of the neck that rested on her leg.

They decided to play a blend of east and west. The first song was John Lennon’s “Imagine”, complete with a mix of the keyboard and Indian drums and guitar. It was very cool! I tried Shazaming it, but it didn’t work…..