As everyone’s probably noticed, I’ve been slacking on my blog posts the last few weeks. Instead of 1-2 times a week, I’ve only been writing every week-and-a-half. This is the second time in a row I’ve missed my self-imposed deadline.

Why am I slacking?

Well, the real world had to kick in sooner or later. And it did. I’ve been doing some freelance work for a few months now. It had been fairly sporadic, but has really exploded the last month. Yep, the dam is breaking and I’m being flooded with work. It’s not overwhelming, but it’s more than I’ve experienced since beginning my Sabattical.

Now, that in and of itself is not a bad thing. I have bills to pay after all. And I’m grateful an opportunity to do that fell right on my head.

However, I’ve found my motivation has been tested recently. It’s much, much easier to write blogs posts and short stories when those are really your only deliverables. Now that I’m doing actual client work, life is getting in the way. And it’s so easy to get to that spot where you feel “too tired” or “not motivated enough” to work on personal projects, ones without true deadlines.

Here’s the deal: I can’t do that. I know the life I want to lead, and I’m not there yet. I have to do everything in my power to get to that place. Otherwise, this whole Sabbatical will have been a big ol’ pile of dookie.

So I’ve been thinking lately about motivation, what powers it, and how to keep your drive going. 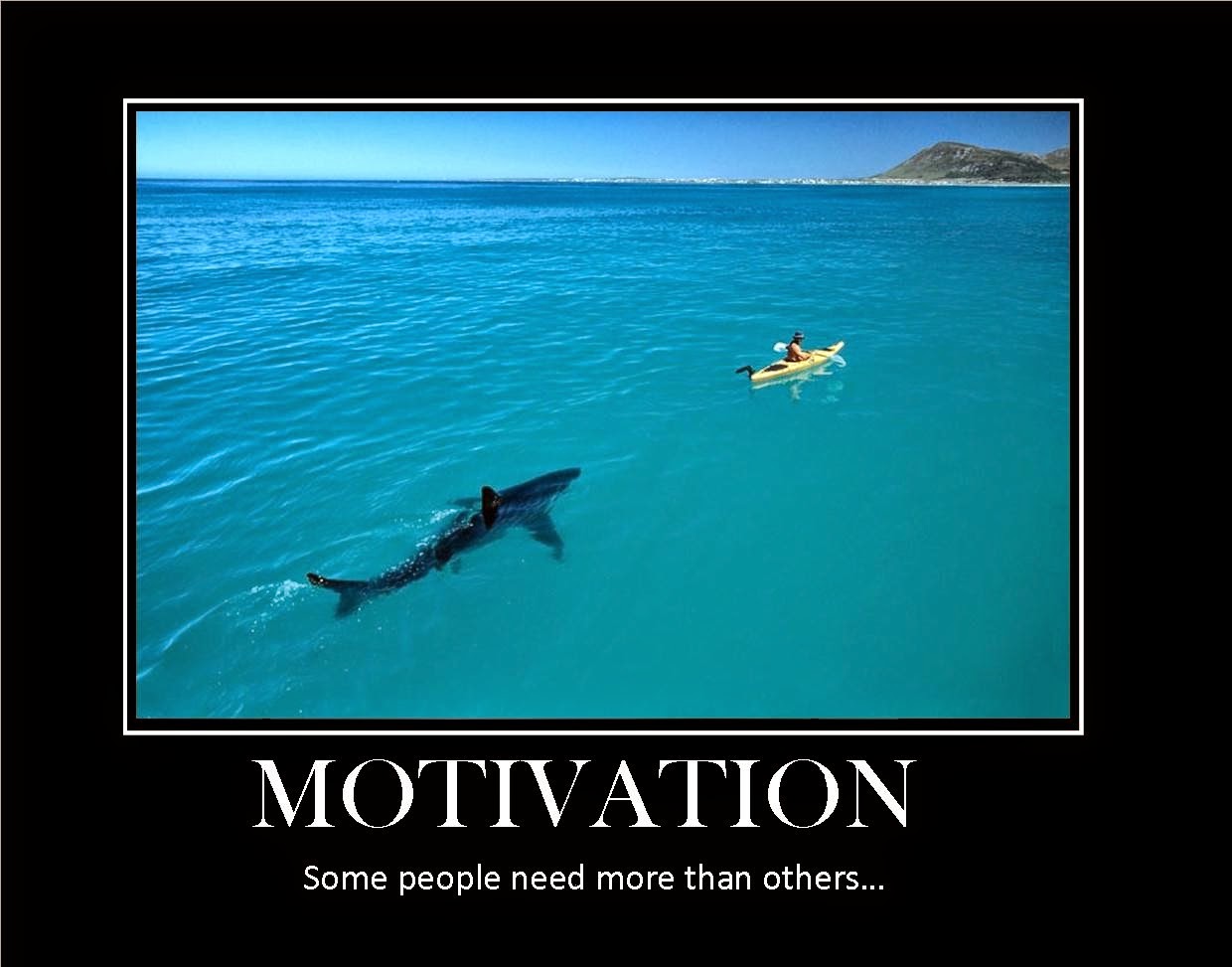 When it comes down to it, what makes me more or less motivated than the next guy? I’m sure there are a million reasons, each one more subjective than the last. Here are a few that really jump out at me, though:

I had a friend who was about the nicest guy you could imagine. He reeked with generosity and constantly helped people in trouble.

On the flip side, he never, ever, ever, ever finished anything he started. His place was littered with half-finished projects. One day his entire world would be about “tearing up the carpeting.” A week later, the floor would be a mess but he’d already moved on to his next passion project. I think he started at least 10 novels. None were more than a few pages long (about a day’s worth).

I never really thought much of it until I met his family. Their walls were half-painted. The floors were just boards waiting for carpet. An old Mustang was literally on blocks in the front yard. I assumed it had been there for years.

Seeing that guy’s family changed my perspective on him.

I think it’s hard to escape the gravity of your family. Habits passed down for generations are hard to shake. Some families just seem to be more naturally motivated than others. I think most of us come from families who fall somewhere in the middle. I believe I did. That means, on any given day, I can fall into the “lazy” trap.

Revenge or the need to prove something to someone.

A girl I know was recently dumped by her significant other. When talking to her, she kept her head up high and said that it was time for a change.

Suddenly, all these posts on Facebook appeared announcing her new goals. “It’s time I take care of myself.” “It’s time for me to become happy with my body.” “I’ve signed up for a gym membership and I’m not stopping until I fit my high school jeans.”

For awhile, I saw regular pictures of her at the gym. She frequently posted little motivational messages. “It’s only been a week and I’m already noticing such a huge change!” “My clothes fit better and I have so much more energy!” “Wow!”

Given all that positivity and excitement, how long do you think her motivation lasted?

Until she met the new person of her dreams about a month later.

Suddenly, the workouts immediately became less frequent. When her status changed to “In a Relationship”, all mention of fitness vanished.

I have really mixed reactions about this one. On one hand, I roll my eyes now when anyone, post break-up, announces their dedication to themselves. 99% of the time, it’s very short-lived. On the other hand, I’ve done it myself. So I’d be a hypocrite to judge.

For some reason, motivation floods us when we’ve been hurt or have something to prove to someone else. It’s ironic to me that this is also the most “dangerous” form of motivation. It’s completely shallow. When we say, “I’m going to get that body I’ve always wanted!” what we’re really saying is, “I hope my ex sees me and regrets his/her actions.”

Doing something because of someone else rarely takes hold.

The need to prove something to yourself.

This is the type of motivation that feels healthiest. When you eliminate outside factors, and do something simply for self-improvement, that’s when other people’s actions don’t affect you. Victory tastes so much sweeter when you make break-thrus having only yourself as motivation.

I’d like to say this factor is what powers me. And to some extent it does. But I guarantee you, deep down, all the other things play their part. I’m not going to lie – I’ve had those fantasies about going to my next high school reunion with people pointing and whispering, “It’s that super awesome published author guy who took the Sabbatical!” Is that the healthiest thing? No, but that doesn’t mean it’s never happened.

And I’ve also had my share of slip-ups, where I’m “too tired” to write. Or I “have plenty of time” to do it later. Or “I’m not good enough” to make a living doing this. I’ve fallen victim to every derailer in the book. Honestly, I think humans are genetically wired to find excuses. I’m sure there’s an evolutionary thing to it (maybe the lazy hunters thousands of years ago were the ones who avoided being killed by saber tooth ligers).

So how you stay motivated?

There are lists and lists out there about this, but I wanted to share a few key things that really help me when I’m feeling down and unmotivated. Heck, I’ll need to read these over the next few months.

Remember that someone else has it worse and still finds time.

It’s been said that John Grisham worked a crazy-busy law job, usually tallying 60+ hours a week. At the same time, he was married and started a family.

In the midst of all that, he wrote his first two novels.

Give that a few read-thrus then try to tell me you don’t have time to work on your passion project.

It’s not as easy to make excuses is it?

People who maintain their motivation and convictions FIND THE TIME to work on passion projects. Anyone can put aside 10-15 minutes a day. If you consistently tell yourself you can’t, you’re kidding yourself.

You just have to clamp down and do it.

You may not feel motiviated or energetic at all. You may think you won’t produce anything worthwhile. That’s just not true. Often, just the act of sitting down and starting whatever it is you want to work on for a few minutes will spawn that energy. You just have to give yourself the opportunity to get there.

Want an example? I was dead tired before sitting down to this blog post. I figured I’d write a few paragraphs and be done with it. Now look at the post! It’s an eternity long! Seriously. I think War and Peace was shorter than this post. I’ve been sitting here over an hour and I’m still writing/editing.

Have frequent conversations with yourself.

It’s easy to hide in routine. I’ve had moments where months passed without my realizing. I knew I wasn’t where I wanted to be. But it’s easy to get lost in everyday life. Surprisingly easy. Weeks would go by between bouts of “I should be doing something else.”

What have I done about that?

I’ve started talking to myself. Out loud.

I’ve mentioned this one before, but I can’t stress how important self conversations have been. At least once a week, I sit in my car (or take a walk) and talk to myself. What do I talk about? I ask myself if I’m happy. If so, why? If not, why, and what can I do to fix it? I ask myself if I’ve enjoyed what I’ve been doing. I ask myself if I feel i’m moving in the right direction.

Basically I just get in tune with my emotional state. If something doesn’t feel right, I try to reason out why. Sometimes I don’t know how to fix anything. But that’s OK. I remember it and tackle the issue later.

Sometimes I feel off but am not sure about the cause. During those times, I throw out potential reasons then resurface them a few days later. Often, reasons sink and fall until one or two really stand out. Then I can work on addressing them.

Without taking these time-outs, I’d find myself getting complacent again. I think this step is crucial for those of us who weren’t gifted with innate, limitless, unswerving drive.

When it’s all said and done, I need this blog post as much as anybody. As I get adjusted to working again, I’ll have to really focus on keeping myself writing/singing/etc…. As weird as it sounds, I actually wrote this post on motivation as a form of motivation. I was like “write something today!” and part of me was like “I don’t wanna!”.

This was the result.