Because the house hunt is still going on, I figured I’d share a few more “interesting” houses we’ve seen over the past few weeks. 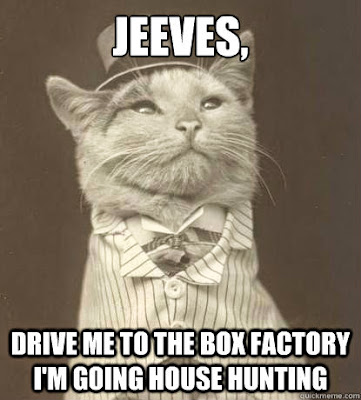 Seriously, I’d love to become a professional house viewer.  I would be able to start the most awesome blog ever!

One Saturday afternoon, our realtor led us to a charming house in a great neighborhood. Although she gave residents plenty of warning to vacate for the showing, our realtor always rang the doorbell while making a joke about not wanting to interrupt anyone (“I’d hate to walk in on someone on the toilet.” *rimshot*).

To our surprise, the door opened and a woman, said, “Hello? Can I help you?”

She looked at us as if we were selling farts door-to-door. We glanced at each other, confused.

It turns out the lady’s realtor never let her know we were coming.

Our realtor said, “We’ll leave you alone and reschedule. Sorry.”

“That’s OK. Thank you though,” our realtor said.

“No, seriously, come in,” the woman replied.

She wouldn’t take no for an answer! We finally gave in and walked inside. At that point, I assumed the woman would run off and hide while we looked around.

She went right to the living room, plopped down at the table, and continued slurping on a bowl of something.

Oh, and did I mention there were kids everywhere? We navigated the house while a little girl played with a dog, a teenage boy messed with her, a younger boy hid on a couch under a blanket (apparently he thought he was invisible), and so on and so forth.

Let me tell you, it’s hard to discuss the pros/cons of a house when a family member is always around. I began to wonder if the mom planted the kids as spies to hear what we were saying.

One house looked perfectly nice from the outside: pretty landscaping, great curb appeal, big porch. We walked inside and the niceness (nicety? nicerama?)  continued. The entrance opened to a foyer next to a beautiful dining area.

We proceeded to the garage and into the back yard. That’s where we got our first glimpse that things weren’t all merry in the “nice foyer house”.

A broken TV lay in the back yard. It was right on the porch, dead and decaying. For a second, I wondered, “Maybe it’s art.” But that means I’d have to classify all the Coke cans as art, too.

The family must have hooked Coke directly to their water supply. I imagined pushing a glass against the water dispencer in the fridge and watching carbonated beverages pour out.

After making a path around the back yard, we went into the bedrooms where the weirdness continued. One floor was covered with what looked like dried vomit or diarrhea. I almost stepped in it like dog poop.

Looking back, I don’t think it was poop or puke. It tasted more like old jelly. Still, it was really gross.

The kicker? Of all the houses we’ve looked at, this was the most expensive.

I’m still a bit flabbergasted. The house had been on the market for several months. I can picture the owner sitting around, thinking, What do I do to sell this house?

I want to develop mental powers, just so I can break into his head and respond, Spend thirty minutes cleaning!

Windy and I took a walk the other day and came across an open house. On a whim, we decided to go in and check it out.

We were met right at the door by an elderly British gentleman. He immediately said he was the realtor for the house. When he added, “I’m also the owner,” we should have known we were in trouble. See, when the owner and realtor are the same person, their passion for the house is multiplied by pi times eighty.

This guy was no exception.

We got to hear all that before even walking thru the house. Already, Windy and I looked at each other thinking, Whose idea was it to come here?

After he finished, we finally took our tour. I was excited because you’re typically left alone to wander an open house. That way you can view and discuss things at your leisure. Not in this case. The guy followed us every step of the way. And every step he talked about all the things the previous renters had broken that he had to fix.

Honestly, the house may have been perfectly nice, but I can’t remember. All I’ll ever hear is, “This was a lovely trellis before the renter’s bloody dog ripped it off the bloody wall and ate it.”