Merry Christmas everyone! And Hanukkah, Kwanzaa, and everything else too. (NOTE: I swear I didn’t have to just look-up how to spell Hanukkah and Kwanzaa… and Christmas).

Because of the recent move, our Christmas was smaller this year. In fact this was our Christmas tree (and only decoration in the entire house): 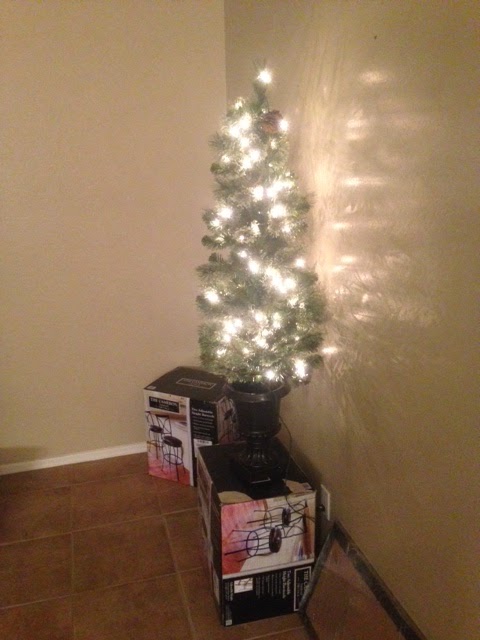 Notice the Christmas tree stand is a box holding a barstool. We know how to do it up in style!

Despite how depressing that looks, we had a great Christmas (in a new house!)! Here were some memorable moments:

Windy and Chris have one TV in their home. It’s a gem they picked up at a garage sale for 30 bucks while Windy was in college. Seriously. Feast your eyes on this: 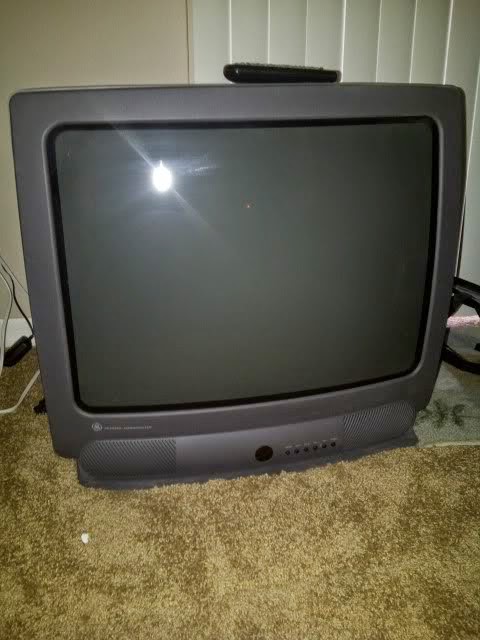 (SIDE NOTE: Wow, these pics make us look so depressing, LOL! I swear we are fancy. Really!)

Since coming to Arizona, Chris’s dream has been to get a new TV. I don’t think a day has gone by where he hasn’t brought up “how good a TV would look in this spot” or how “Steel Magnolias would look great on a 50-inch.”

Unfortunately, something has always stood in the way of him actually buying one.

Sooooooo after a long discussion, guess what Chris’s dad bought him for Christmas?

Yep! The TV of his dreams.

Because of the awesomeness of the present, we decided to keep it a surprise. Windy had it shipped to her work, we drove it home in my car (which is a crazy story all its own), and hid it in my closet (a place he’d never look).

On Christmas morning, after everything had been opened, Windy gave him a tiny gift bag containing a single sticky note. On it was a clue that led to another sticky note. We planted them around the house (and in the front/back yards), each one taking him closer to my room.

When he finally scurried into my bedroom, Windy and I were practically peeing from excitement. Chris began searching around when his eyes scanned the corner of the TV box in my closet. He froze.

That’s all he said as he moved my clothes away and uncovered the TV.

Windy and I expected him to scream or laugh or something. Instead, he didn’t say a word and just stood there in shock. It’s like his brain couldn’t accept he was actually getting a TV.

2. The Crappiest Gifts Ever

Because Chris was getting  such an awesome present, Windy decided to play with him a bit before the treasure hunt.

Consequently, his first gifts were: comforter clips, Blistex, a used plastic coffee mug, and a bag of flour. 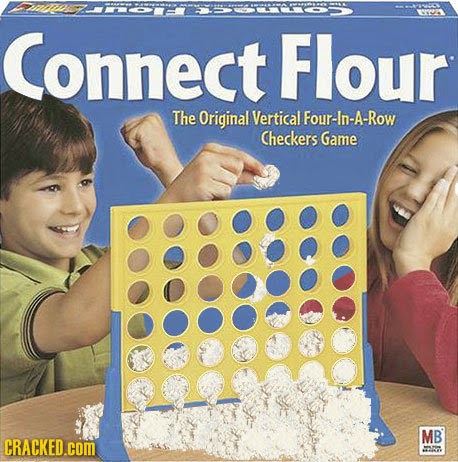 Yep, she wrapped up a bag of flour from their pantry and gave it too him.

I guess he needs to see the video of the little kid who gets a banana and thanks his dad for it.

Because of midnight Mass, we didn’t get to bed until around 3:00. The three of us still wanted to get an earlier start, so we got up, groggy, at 9. Windy and Chris immediately started a big pot of coffee.

The problem is, I can’t drink coffee straight. It gives me horrible diarrhea (hey, you asked… wait, you didn’t… oops!). So here I was moping around, all tired, as Windy and Chris energized on coffee beans.

Finally, I said, “Ugh! I wish I had a Frappuccino!”

Suddenly, Chris disappeared. When he came back into the kitchen, he was carrying a 4-pack of Frappuccinos. Chris won Christmas!

I think everyone out there knows I’m not the handiest person in the world. It was just last week I learned the difference between vice grips and channel locks, LOL! Growing up, I was always the designated “light boy”. The only thing anyone trusted me with was holding the flash light.

I’m trying to become more handy, though. Therefore, when it came time to put together the barstools pictured above, I volunteered to take them on by myself.

Oh man, I’m just so naturally terrible at that stuff. Is there a gene for handymanness? If so, I think I need some injections or something. Here are a couple mishaps:

A. I got tired of using the teensy Allen Wrench (I’m not even sure that’s how you spell it), so I whipped out Chris’s power tools. The thing is, they couldn’t quite reach the bolts. Still, I insisted on forcing it… and I ended up stripping out virtually every bolt on one of the 4 stools. I’m not telling them which one, but if they ever have to tighten it up, good luck!

B. I accidentally built one of the stools upside down. Yep. I put the seat back on the wrong side of the cushion, so you’d be sitting down on the metal underside. Comfy! I didn’t even realize it until the entire back was on and I went to bolt it to the legs.

Band of the Dying Cat Parade