A few days ago marked the one-year anniversary of our hospital stay in Omaha. In case you’ve forgotten (or never knew in the first place), my sister went to a specialist there for a couple surgeries. We were only supposed to be in the hospital a few days (with a 4-5 day break in between each surgery). Well, there were complications and we ended up staying there for an entire month straight.

Never in my life had I thought about what it was like to live in a hospital. And if I’d tried to make a guess, I would have been completely wrong. I don’t think anything can prepare you for life in a hospital. Therefore, I wrote a blog post near the end of our stay, sharing some tidbits dealing with hospital life.

Because it was such a momentous event in our lives, I figured I’d re-share that post… with a few additions/alterations:

Life in a Hospital

Oh boy, where do I start? We are in Omaha a few weeks while Windy has a series of surgeries.
First off, let me talk a little about the Midwest during the winter.
It sucks. It really just sucks. It sucks a whole lot. Right now, it’s 7 degrees out and snowing. Last week in Wisconsin, they had a day where the high was -5 degrees!!!
I’m telling you, I used to complain about the cold in Dallas. Not anymore! No one in Dallas is ever allowed to complain about the cold again. For reals! On the coldest midwest day, I took my gloves off for about 15 seconds just to see what it would be like. By the time those 15 seconds was up, my fingers were burning they were so cold. Ick.
Also, I admit I complained about it. A lot. But I was losing like forty toes to frostbite!
Again, let me just say that it sucks.
Now that that’s out of the way (IT SUCKS!) I can talk a bit more about my stay here at the hospital. I don’t want to get so into the medical part, but my sister was set to be in the hospital for a total of about 4 days. Unfortunately, there have been some complications and we’ve been here about 18 days now. Seriously. And we don’t have a hotel so we are literally living here at the hospital in Windy’s room. I feel like Tom Hanks in that movie where he lives at the airport.
It sounds awful, but I’ve learned a whole lot about a “hospital vacation” – that’s what I’m calling it -and wanted to share some of the more memorable moments and tidbits of info:
1. Sleeping is a real challenge.

Everyone knows hospitals never shut down. But it really sinks in when a nurse comes in every two hours, day or night. It was especially funny when one of them came in at 2:00AM, woke Windy up, and asked “What is your pain level from 1 to 10?” Chris later told us he wanted to scream, “Well it was a 0 until you woke her up!”
Then at 6:30, the doctors start coming in. The irony is palpable: They tell you to rest while interrupting, constantly, day and night.
Additionally, Chris and I also had to deal with sleeping arrangements. While Windy was in her comfy hospital bed, Chris and I were given recliner chairs. Now let me stop you before you think they’re like La-Z Boys. Nope they’re regular chairs that recline about half way (so you can’t actually lean all the way back). And if, while sleeping, you lean forward just a little, the whole thing snaps forward and collapses with a huge bang. Chris has been sleeping on one for days. Not me. I went to Wal Mart and found the most amazing thing ever: A slim twin air mattress! 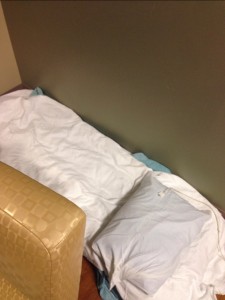 It’s only as wide as my body but it fits perfectly in our little hospital room: Chris refuses to sleep on it (he’s too proud) but it literally changed my world after the awfulness of that first night. Since then, I’ve actually relaxed on it during the day because it’s so (relatively) comfy.
2. Eating good food is difficult.

This hospital has two food sources (excluding the vending machines): a standard cafeteria and a Subway. The cafeteria (which I’ll talk about in a second) is only opened for a couple hours during the day and closes during dinner, which means I’ve eaten Subway 11 times since I’ve been here. Seriously! I think my blood has been replaced by tuna (with onions and Sriracha). I do have to admit that their cookies are awesome though. I’ve had about eight hundred raspberry cheesecake cookies since we’ve arrived.
OK now on to the cafeteria.
When you think about hospital cafeterias, you picture dingy rooms with long lines and gross looking platters and even grosser looking food. I have to say that the cafeteria here actually defies that stereotype. Sort of. They’ve gone out of their way to make it look cool and modern. They even have stations setup where you can get Asian food or American food or a salad bar.
My first day, I was SOOO excited to find the Asian station and promptly ordered the Thai stir fry. Then I tasted the food and all my hopes and dreams were dashed upon the rocks.
In the days we’ve been here, I’ve tried like 20 things… And approximately 19 of them taste exactly the same. Like fecal-infused dirt. I will say, though, that the Mediterranean couscous (of all things) I had today was pretty awesome.
3. The nurses are really freaking awesome and cool!

Being here so long, we’ve made friends with the nursing staff and love all of them. I think we are their favorites, too. Two of the nurses are bringing fingernail polish and curling irons and stuff tomorrow to give Windy a makeover, LOL! I had to help her peel off her gel nails in preparation. One piece actually hit me in the face as I ripped it off.
4. Exercising is very interesting.

Windy has been encouraged to walk around to get her systems going. So we have found some interesting treks around the floor. For example, a bird apparently crashed into one of the windows. I know this because the poor thing left a perfect imprint of its body: 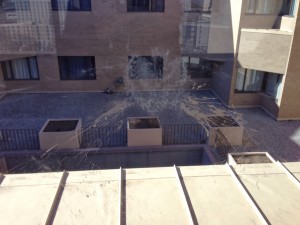 It was flying so fast that there’s also a bowel explosion, That may sound like TMI, but those are the kinds of things you notice.
We also found a hallway with pictures of babies. Some of them are cute but some freak you out to your very soul.
As far as working out goes, I’m insisting on doing some of my Insanity videos to keep in shape. Last night, I plugged in the DVD and did the workout right in Windy’s room. Naturally, a doctor came in fifteen minutes later and interrupted, so I did push-ups while he worked LOL. I’m pretty sure I’m known as the weirdo brother on the fifth floor.

5. You Find Weird Ways to Pass the Time

Being stuck in a hospital, you have to find unique ways to pass the time. Like taking glamour shots with hospital clothes and blankets: 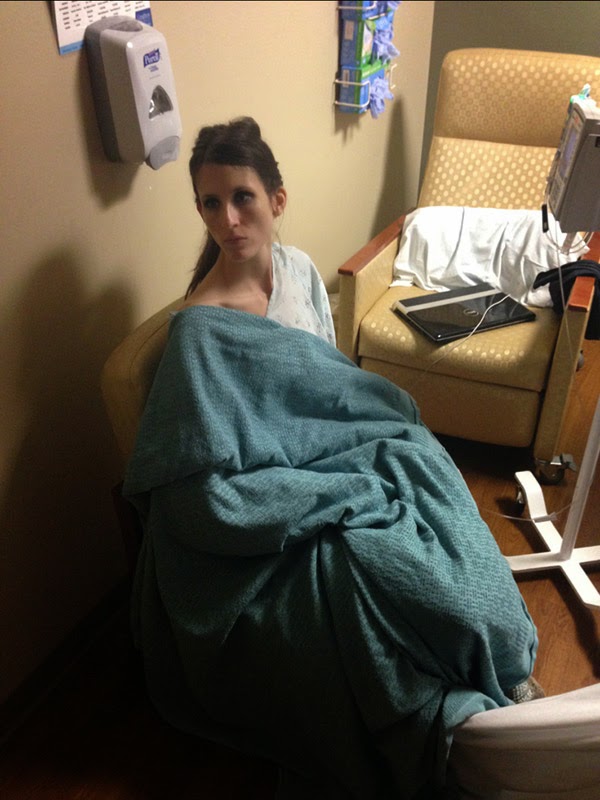 And finding fun stuff in the gift shop. Like this giant ceramic asparagus: 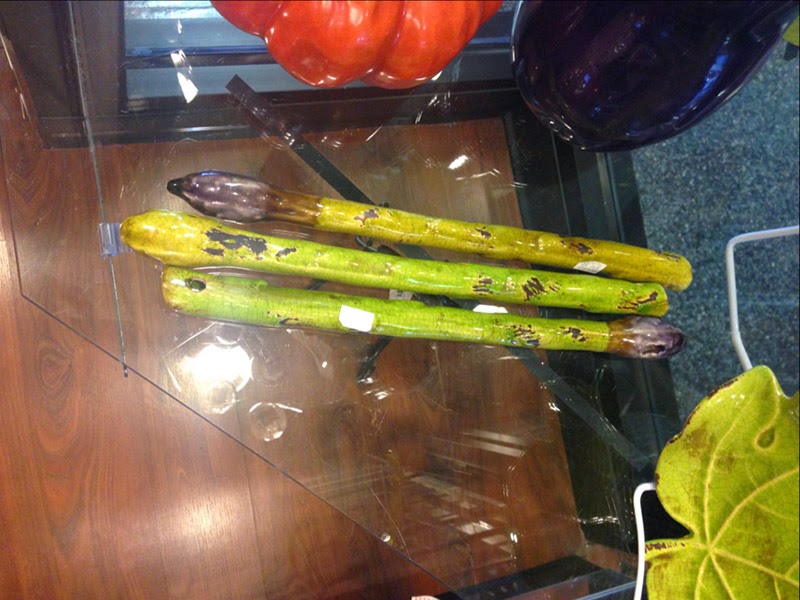 6 Steps to the Perfect Valentine’s Day